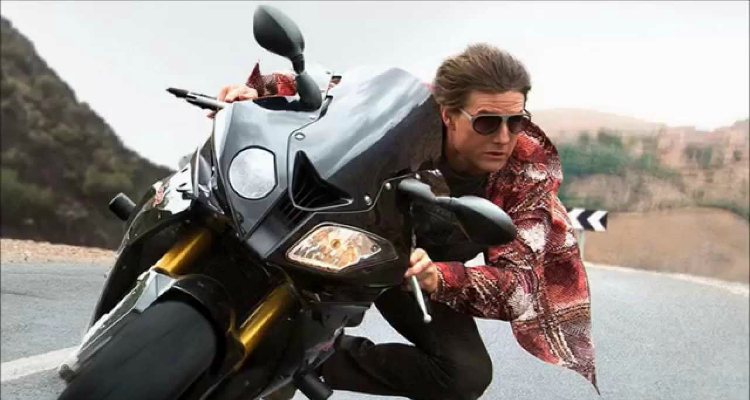 MISSION: IMPOSSIBLE – ROGUE NATION (USA/12A/131mins)
Directed by Christopher McQuarrie. Starring Tom Cruise, Jeremy Renner, Simon Pegg, Alec Baldwin, Rebecca Ferguson, Ving Rhames, Sean Harris, Simon McBurney, Hermione Corfield.
THE PLOT: With CIA chief Alan Hunley (Baldwin) determined to disband the Impossible Missions Force, the independent espionage agency’s no.1 operative, Ethan Hunt (Cruise), is just about to uncover the sinister and highly secretive international terrorist organisation known as The Syndicate when he’s captured and quickly framed as a rogue agent. With a little help from undercover agent Ilsa Faust (Ferguson), Hunt escapes, and with the CIA on his tail, he sets out to prove the existence of The Syndicate – and, more importantly, bring down its leader, the lizard-like Solomon Lane (Harris). But, who to trust…?
THE VERDICT: Hitting the ground running, and pretty much never slowing down for its slightly-too-long 131 minutes, once again, Tom Cruise tries the Trojan Horse approach back into box-office glory, after the superior Brad Bird-directed Mission: Impossible – Ghost Protocol in 2011 gave the former multi-plex messiah his only true box-office hit since, well, MISSION: IMPOSSIBLE III in 2006. So, he must be pretty damn happy to have a franchise to hide in, ROGUE NATION continuing the last MISSION: IMPOSSIBLE trick of making Cruise part of an OCEAN’S 11 crew rather than a Bond alone.
Which is not to say that you don’t get plenty of bang and gadgets for your buck here, the Mission: Impossible franchise being far more Pierce Brosnan than Daniel Craig as it chooses the ridiculous over the sublime on the bowtie-is-really-a-camera front.
The increasingly harangued-looking fanboy Pegg does his Pegg thing as bumbling computer geek Benji, whilst Renner, Baldwin and Rhames pretty much do Renner, Baldwin and Rhames. The only notables are the great Sean Harris (HARRY BROWN, RED RIDING, DELIVER US FROM EVIL), who once again does a perfectly chilling everyday Clockwork psycho, and Swedish newcomer Rebecca Ferguson, solid as the seductively quadruple-crossing killer queen.
Serviceable rather than remarkable, ROGUE NATION should keep Cruise’s hopes of winning another title fight some day alive and kicking. For another few years.
RATING: 3/5
Review by Paul Byrne