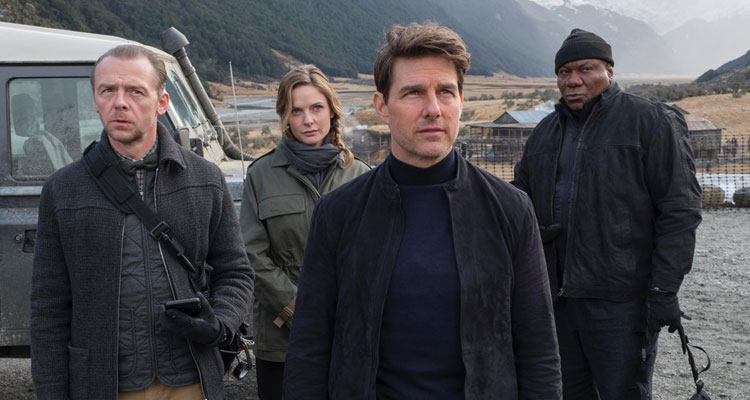 The Plot: IMF agent Ethan (Tom Cruise) and his team of Luther (Ving Rhames) and Benji (Simon Pegg) find themselves in a sticky situation when they fail to recover some plutonium, which has the potential to create two deadly bombs. CIA agent and hard nut Walker (Henry Cavill) is drafted in to make sure the mission goes according to plan. In order to locate the plutonium, Ethan poses as a buyer. A condition is placed that Ethan must spring former villain Solomon (Sean Harris) from prison. It seems that his disciples are carrying on his murderous work without him. To add further complications, Ethan’s former flame Ilsa (Rebecca Ferguson) is in a bind and has to take out Solomon. Ethan will have to keep everything together and on target in order to avoid a massive fallout…

The Verdict: Now running for 22 years and 6 films in that time period, the Mission: Impossible film series shows no signs of slowing down. At least until fiftysomething Tom Cruise, forever the trooper who does his own stunts, decides to call it a day. Thank heavens that he hasn’t hung up his mask just yet, as the latest instalment Mission: Impossible – Fallout is a blast. It must surely go down as one of the summer’s most exhilarating and hair-raising blockbusters, as well as an action landmark for its innovative combination of death-defying stunts and eye-popping cinematography. Hold on to your butts.

Fallout is a first in several ways, in that it breaks tradition from the previous entries. A former antagonist, whose true villainy was only hinted at in Rogue Nation, returns. Sean Harris provides a strong physical presence as Solomon, the ideal foil to Ethan. Then there’s also the matter of writer / director Christopher McQuarrie. Whereas each director has left their own individual stamp on the series, Cruise invited McQuarrie back for a second bout. Their long-running partnership, which stretches back a decade to Valkyrie, certainly reaps the rewards here. McQuarrie’s intricately-structured script is laced with espionage intrigue and enough double crosses and red herrings to bring it firmly over the line of credibility rather than stretching it.

With so elements in this potentially convoluted mix, it’s to McQuarrie’s credit that it instead comes out as a delicious cocktail of frequently-changing flavours. The wild card in the pack is Walker. Anyone left in any doubts about Henry Cavill’s abilities as an actor should be silenced by his ‘sledgehammer’ performance here. Fronted by a magnificent moustache (the cause of so much ridicule when it was digitally removed for Justice League re-shoots), he’s more than a match for the two-decades-older Ethan. Cavill and Cruise make a great burly brawl double act, as they come to punches over the future course of the mission.

For almost 2.5 hours, the film moves like a bullet, only slowing down to deliver crucial information or important character development – like the welcome return of Ethan’s former wife Julia (Michelle Monaghan). Any fat has been trimmed off in the edit to streamline this as a breathless chase film, with the IMF team playing a high stakes game of life and death. McQuarrie punctuates all this with some superb action sequences, like a vertigo-inducing HALO jump and a breakneck chase through the streets of Paris. McQuarrie, Cruise and their stunt team may have just handed a challenge to the upcoming James Bond film to top their efforts. Mission: Impossible – Fallout is a boost of adrenaline and quite possibly the best film in the franchise so far. Mission: Incredible more like.