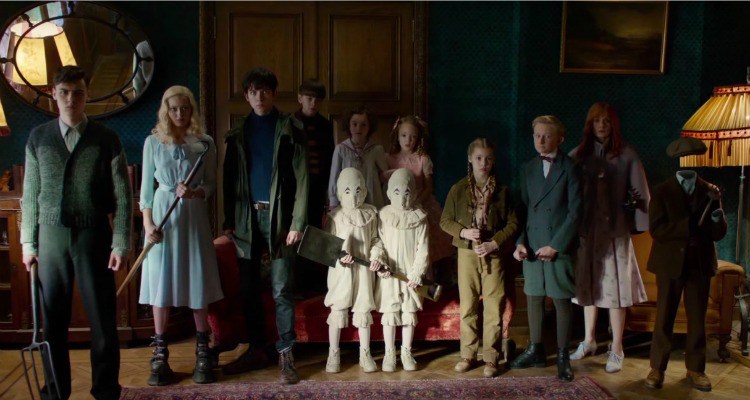 MISS PEREGRINE’S HOME FOR PECULIAR CHILDREN (UK | Belgium | USA/12A/127mins)
Directed by Tim Burton. Starring Asa Butterfield, Eva Green, Chris O’Dowd, Rupert Everett, Judi Dench
THE PLOT: After his grandfather dies in mysterious and eerie circumstances, Jake (Asa Butterfield) demands to travel from his home in Florida to the island of Cairnholm off the coast of Wales, to find the Children’s Home where his grandfather lived as a child. When he arrives, Jake meets all the people his grandfather told him stories about, including Emma (Ella Purnell) a girl who can float, Olive (Lauren McCrostie) a girl who can control fire, and Horace (Hayden Keeler-Stone). On realising that his grandfather’s peculiar friends are real and seemingly not aging, Jake learns that there is more to these peculiar children and their hidden lives than he ever would have dreamed.
THE VERDICT: Based on the series of books by author Ransom Riggs, ‘Miss Peregrine’s Home For Peculiar Children’ is director Tim Burton’s first film since ‘Big Eyes’ in 2014. The director seems to have done away with the tropes that he had become known for – Danny Elfman score, stripes and swirls, ghoulish lead characters – to tell a story already beloved by readers around the world.
Asa Butterfield seems to be making a career of playing the odd kids – ‘Hugo’, ‘Ender’s Game’ – but he is one fine form as the curious but cowardly Jake. The heart of the story, and the voice of the audience when things take a turn for the peculiar, Jake is a character the audience wants to root for as he gets drawn into a world he never even knew existed. Eva Green plays the titular Miss Peregrine, and makes the character fierce but caring, while Chris O’Dowd struggles with an American accent as Jake’s father, Terence Stamp makes Abe odd but endearing, and Samuel L. Jackson camps it up as the menacing Baron. The rest of the adult cast features Rupert Everett, Judi Dench and Allison Janney. As far as the kids go, Ella Purnell makes the floating Emma endearing and brave, Finlay MacMillain obviously has fun with the brattish but smart Enoch and Lauren McCrostie is sweet as the pyro-inclined Olive. The rest of the younger cast includes Hayden Keeler-Stone, Georgia Pemberton and Milo Parker.
Screenwriter Jane Goldman is used to adapting literary works for the big screen, but her work with comic books ‘Kick-Ass’, ‘Kingsman: The Secret Service’ and the ‘X-Men’ films becomes obvious in the screenplay for ‘Miss Peregrine’s Home for Peculiar Children’. While there is a lot to love in the film, including the kids’ peculiarities, and the eerie feeling the film is infused with, there are times when ‘Miss Peregrine’s Home for Peculiar Children’ feels a little like it was inspired by ‘X-Men’, with a dash of ‘Cirque du Freak: The Vampire’s Assistant’ and ‘Percy Jackson and the Lightning Thief’ thrown in for good measure. The film is fun in a lot of places, but can’t shake a feeling of familiarity, as everything builds to a recognisable close.
As director, Tim Burton has dialled back his signature tropes for ‘Miss Peregrine’s Home for Peculiar Children’, but manages to hold onto the creeping feeling that he did so well in films like Beetlejuice and Edward Scissorhands; this is our world, but not as we know it. The film is well paced for the most part, but feels bloated at times, as though Burton couldn’t help but stay in this creepy and off-kilter world just a little longer. While it is fun to spend time in the world of Miss Peregrine’s making, tighter pacing and different music over the Ray Harryhausen inspired final set piece could have made for a more engaging and less obvious film.
In all, ‘Miss Peregrine’s Home for Peculiar Children’ is the least Tim Burton-y film the director has released in years, and that’s a good thing. The cast do well, the film is beautifully shot, but tighter pacing and less indulgence in the world of the story could have meant the film feeling less familiar and more engaging.
RATING: 3.5/5
Review by Brogen Hayes