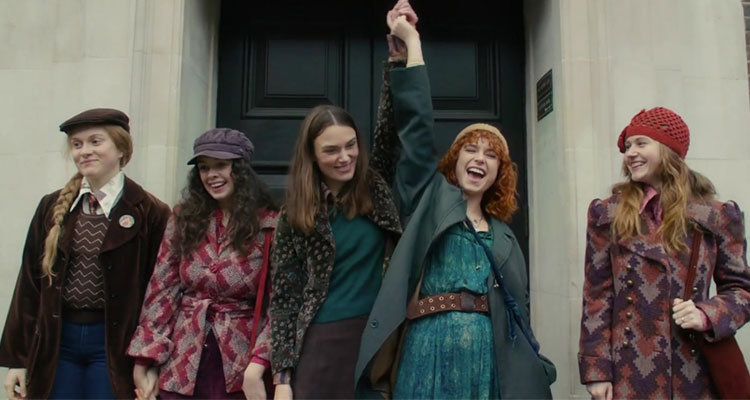 In short: Behaves itself

The Plot: London, 1970. It’s a new decade and revolution is in the air. Mature history student and divorced mother Sally (Keira Knightley) encounters latent sexism in her university, which doesn’t seem interested in women’s issues in the Industrial Revolution. A firebrand at heart she speaks out against the Miss World competition, a long-running beauty pageant that she regards as objectifying women and certain standards of beauty. She finds more sympathy with the underground Women’s Liberation movement, fronted by Jo (Jessie Buckley). They hatch a plan to invade and then disrupt the Miss World contest, which is being hosted once again by comedian and actor Bob Hope (Greg Kinnear). However, the pageant still means something to the contestants, including Jennifer / Miss Grenada (Gugu Mbatha-Raw)…

The Verdict: Since 1951, Miss World has been the world’s oldest running international women’s beauty pageant. Once attracting the kind of television audience numbers that comfortably saw off competition from the Apollo 11 moon landing, it fell out of favour for its objectification of young women. It’s still around, but is now broadcast on a local London channel – far from the heyday of its primetime BBC slot. If it’s objectionable now, it was even more objectionable a half century ago. That’s the premise behind Misbehaviour (or should that be Missbehaviour?). It relates a number of perspectives on a ‘what just happened’ moment in live television, but with bigger issues at its core.

After storming the stage of the contest and throwing flour bombs, the Women’s Liberation movement subsequently came out of the basement and onto the streets in huge numbers in their struggle against the patriarchy. The real-life contestants and protesters, who appear in the end credits, must think that nothing much has changed in the last half century – at least in the film industry anyway. Rebecca Frayn and Gaby Chiappe’s script makes a noble effort to tell different perspectives: that of the Women’s Liberation protesters; the event organisers; the contestants who are there because it might give them career opportunities; and charismatic host Bob Hope, who knows how to stir up a crowd with a cheeky remark.

Some of these disparate elements work well, such as Sally’s own struggle to be taken seriously as a woman who has valid things to say about institutional sexism. Equally good is the story of Jennifer, a forward-thinking young woman to whom the beauty pageant means something on a deeper level. Keira Knightley and Gugu Mbatha-Raw bring some much-needed depth of character here. However, the script is too busy and unfocused at times to draw the multiple plot strands together in a neat little bow. Some elements suffer as a result, like a criminally under-used Jessie Buckley and an underwritten Bob Hope – despite good work from Greg Kinnear, hilarious prosthetic Pinnochio nose and all.

Director Philippa Lowthorpe, who has mostly worked in television, gives the film a starry TV movie of the week air. The direction is fine for what it is, but one can imagine a better film struggling to break free from the constraints of its environment – like its valiant protesters. Still, it has its moments including the climactic fist-pumping scene when all hell breaks loose and an unexpected moment of poignancy shortly after. Misbehaviour behaves itself and is respectable enough to be both entertaining and mildly informative.