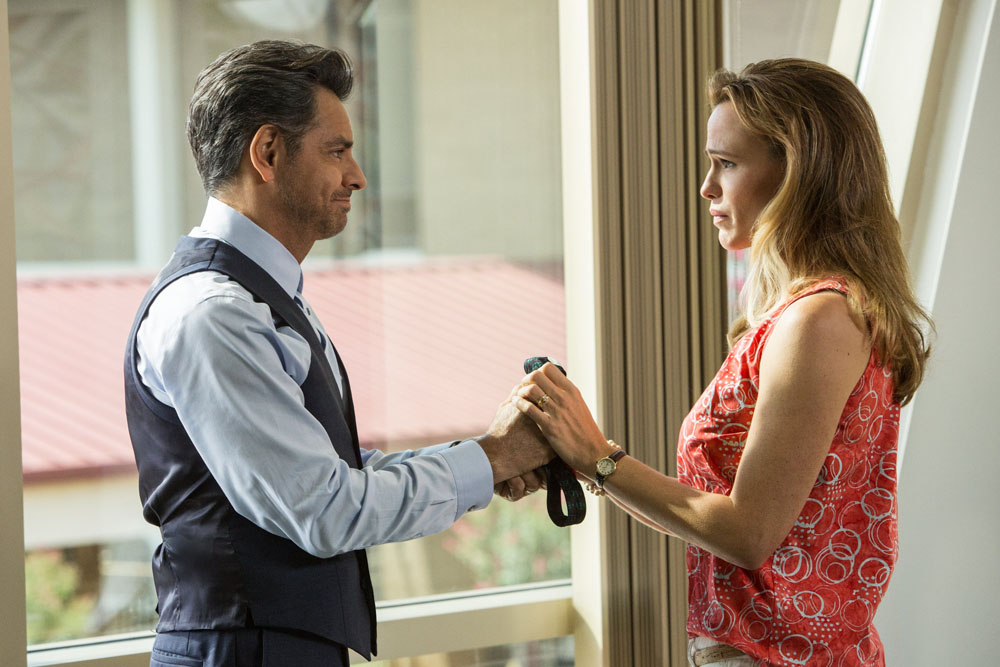 Dr. Nurkoo (EUGENIO DERBEZ) hands his Elmo tie to Christy (JENNIFER GARNER) as a memento now that Anna seems to be healed in Columbia Pictures' HEAVEN IS FOR REAL.

MIRACLES FROM HEAVEN (USA/PG/109mins)
Directed by Patricia Riggen. Starring Jennifer Garner, Martin Henderson, Queen Latifah, Eugenio Derbez, Brighton Sharbino.
THE PLOT: Ten year old Anna Beam (Kylie Rogers) is plagued with an unresponsive digestive disease, and there seems to be no hope of her ever living a normal life. Anna’s patient and tenacious Mom Christy (Jennifer Garner) does not rest until Anna is seen by one of the top gastroenterologists in the country, but even with medication and constant monitoring, Anna’s condition does not change and Christy begins to lose her belief in God. That is, until something inexplicable happens…
THE VERDICT: ‘Miracles from Heaven’ is the latest tale of a child returning from heaven to first be a bestseller, before being turned into a movie. There are moments of true warmth and humanity in this twee, religion heavy tale, but with an almost two hour running time, everything takes so long in this movie that it struggles to hold audience interest.
The cast seem earnest in their depiction of this story, which is based on the book by Christy Beam ‘Miracles from Heaven: A Little Girl, Her Journey to Heaven, and Her Amazing Story of Healing’. Jennifer Garner leads the cast and, although it is through Garner that much of the emotion of the film is conveyed, it is hard to shake the feeling that the actress is capable of so much more than this formulaic, slow and overly sentimental film. Queen Latifah is completely underused as the stereotypical sassy black friend Angela and John Carroll Lynch plays the comedy pastor at the local church. The rest of the cast features Brighton Sharbino, Courtney Fansler and Eugenio Derbez.
Randy Brown’s screenplay is based on Christy Beam’s bestselling book, but the adaptation causes problems right from the off; these characters place their faith on God, and while there is nothing inherently wrong with that, this alienates viewers from the very beginning of the film. If the religious element of the film were removed, the story would simply be one of spontaneous remission and would most likely never have been made into a film. It is the religion we are here to see, and it is this that pushes away those who do not share the same beliefs as the family. The film is told through the eyes of Christy Beam and although this allows Jennifer Garner to give the film some warmth, it is also problematic since many of the rude, dismissive and borderline cruel people depicted in the film simply would not keep their hospital jobs if they truly behaved this way. This means that the film is heavily tinted by Beam’s experiences, which once again alienates viewers. As well as this, the film takes so long to get anything done that the running time is drawn out and the film sluggish.
Director Patricia Riggen does her best with Miracles from Heaven, and while the performances are fine for the most part – sassy black friend though, really!? Haven’t we moved past that!? – the pacing of the film is a true issue, as are the drawn out scenes that needed to be edited more tightly, other editing that sticks out like a sore thumb, overuse of a manipulative piano based score, stereotypical characters and the almost painful earnestness of the film as a whole. Oh, and this is not to mention the catch up with the real family at the end of the film, which is wholly unnecessary, and the crushing feeling that parental neglect leads to miracles.
In all, ‘Miracles from Heaven’ is twee, drawn out and heavy handed, with religion and faith being the orders of the day. Jennifer Garner does her best to bring emotion to the film, and succeeds from time to time, but the overall feel of the film is overly long, saccharine sweet and far too earnest. Jennifer Garner, you are better than this.
RATING: 1/5
Review by Brogen Hayes