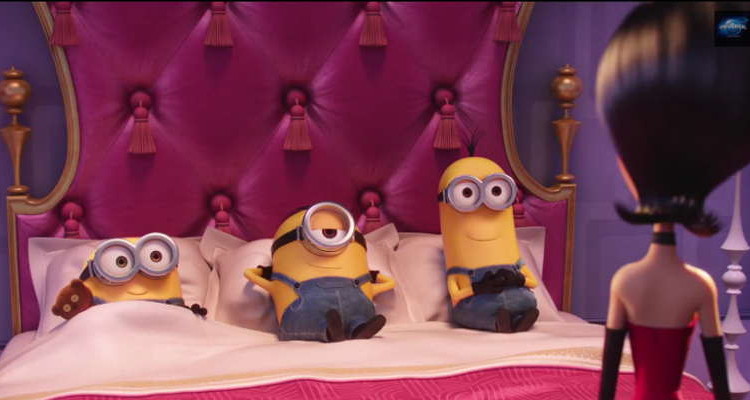 MINIONS (USA/G/91mins)
Directed by Kyle Balda, Pierre Coffin. Starring Sandra Bullock, Jon Hamm, Allison Janney, Michael Keaton, Pierre Coffin, Chris Renaud.
THE PLOT: In this spin off from the DESPICABLE ME films, we learn the history of the little yellow Minions, who so delight in helping the biggest villain they can find, long before they ever met the Despicable Gru. After they accidentally destroy all their masters – including a dinosaur, Napoleon, a vampire and a large portion of Ancient Egypt – the Minions isolate themselves in Antarctica, but three of their number – Bob, Kevin and Stuart – set out to find a villain they can serve, and thus fulfil their life’s purpose. Enter Scarlett Overkill (Sandra Bullock), the world’s first female super villain, who has her eyes set on the throne of England. The Minions vow to help, but of course it is not long before things go awry.
THE VERDICT: It has to be said that a movie focused on the back-story of the admittedly hilarious Minions that seemingly exist to help Gru in DESPICABLE ME, was not needed. Nevertheless, the Minion movie is here and, while it does feel a little superfluous, the good news is that it’s a lot of fun.
Co-director Pierre Coffin takes on the job of voicing the Minions, and does a great job of making them funny and sweet. As the Minions, Coffin is able to carry the film, albeit with a little help from narrator Geoffrey Rush, who is on fine form. Sandra Bullock is Scarlett Overkill, and does a fantastic job injecting life, evil and emotion into the character. The voice cast is rounded out with Steve Coogan, Jon Hamm, Allison Janney, Michael Keaton, Jennifer Saunders and a late in the day cameo from Steve Carell.
Screenwriter Brian Lynch previously brought us HOP and PUSS IN BOOTS, and dipped his toes into Minion waters with the short film DESPICABLE ME: MINION MAYHEM 3D. The early part of the film gives us the history of the Minions, and some great fast comedy, before we settle in with the villains and the shenanigans, as the Minions meet their new boss. The film references several other films, including THE LOST BOYS, and has the feel of an old school Bond movie about it, told from the perspective of the henchmen. There are some clever lines of dialogue for the adults, and plenty of slapstick for the kids.
Directors Kyle Balda and Pierre Coffin play up the Buster Keaton/Charlie Chaplin style of the film; while the Minions can talk – and can often be understood as their language draws from French, Spanish, Russian and Japanese blended together with English – but their charm lies in their vaudevillian feel. The film is well paced and put together, but the entire thing feels startlingly familiar to the first Despicable Me film, as Scarlett Overkill is plotting an evil crime, and the Minions are struggling to help her. The film does diversify eventually, has a killer soundtrack – The Turtles, The Beatles and The Doors all feature – and actually uses the 3D aspect to its advantage.
In all, MINIONS is not a film that audiences needed, but it is one they will enjoy. Coffin and Bullock shine as the Minions and Scarlett Overkill, there are plenty of jokes and slapstick and the soundtrack rocks. The entire thing wears a little thin by the end, but there are laughs to be had along the way.
RATING: 3.5/5
Review by Brogen Hayes