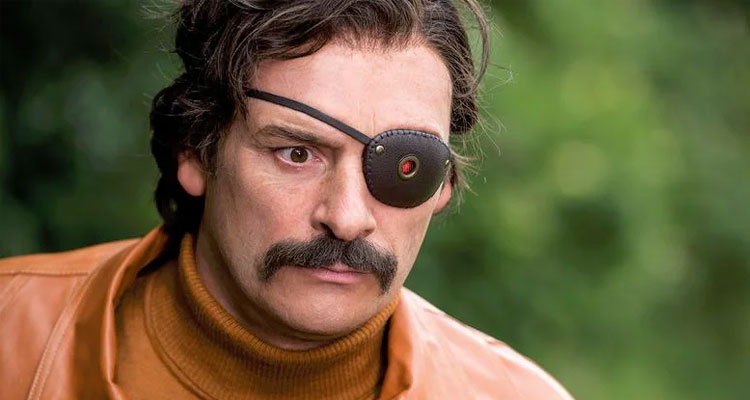 MINDHORN (UK/15A/89mins)
Directed by Sean Foley. Starring Julian Barratt, Simon Farnaby, Andrea Riseborough, Russell Tovey, Essie Davis
THE PLOT: Actor Richard Thorncroft (Julian Barratt) was at the top of his game in the 1980s; star of the hit TV show Mindhorn – on which he played a secret agent with a bionic eye that could always see the truth – Thorncroft was sure that he was one step away from the big time. In 2016, however, things are not so rosy for Thorncroft; washed up and making TV ads for orthopaedic socks, Thorncroft is still suffers from delusions of grandeur. When a killer on the Isle of Man will only speak to Mindhorn, however, Richard Thorncroft is drafted in, and dusts off his most famous character one more time.
THE VERDICT: Written by Julian Barratt and Simon Farnaby, and starring the former ‘Mighty Boosh’ star Barratt as a washed up man who never got the break he thought he deserved, ‘Mindhorn’ is farcical, over the top, absurd and perhaps most importantly, incredibly funny.
Julian Barratt takes to the indulgent, delusional and completely un-self aware character of Richard Thorncroft like a duck to water, and runs with the joke throughout the film. There are moments of humility for the character, but on the whole, Thorncroft is at his best when he believes this is his big comeback. Simon Farnaby takes on the role of Clive, Richard’s former stunt double and manages to convey comedy convincingly through a Dutch accent that seems to be here for no reason at all. Andrea Roseborough plays Isle Of Man cop DC Baines, Essie Davis plays Richard’s former flame Pat, and the rest of the cast features Steve Coogan, Simon Callow, Kenneth Brannagh, Russell Tovey and Richard McCabe.
Barratt and Farnaby’s screenplay feels rather like it was inspired by Toast of London – which stars former Mighty Boosh alum Matt Berry – and there are definitely times when Richard Thorncroft’s delusions of grandeur mirror that of Barratt’s Mighty Boosh character Howard Moon’s similar beliefs, but there is a charm and wit to ‘Mindhorn’ that makes it stand out on its own. The jokes come thick and fast, with many of them resting on Barratt’s capable shoulders, but it is good fun to see Brannagh and Callow take the mick out of their public personas, and to have Steve Coogan play a character whose TV show was not cancelled, for once.
First time feature director Sean Foley keeps the pacing and the timing of ‘Mindhorn’ going, and plays up the kitsch nostalgia factor with mentions of Terry Wogan, and plenty of rather naff ‘Mindhorn’ merchandise thrown in for good measure. ‘Mindhorn’ is, at its heart, a caper, and there is plenty of fun to be had as the characters wrestle their way to the truth across the most famous landmarks of the Isle of Man.
In all, ‘Mindhorn’ is a film that definitely follows in the footsteps of ‘The Mighty Boosh’, ‘Garth Marenghi’s Darkplace’, ‘Toast of London’ and’ I’m Alan Partridge’, but it manages to become it’s own film through Barratt’s clever comedy and some great pacing. Fans of quirky British humour rejoice! It is alive and well, and living on the Isle of Man!
RATING: 4/5
Review by Brogen Hayes