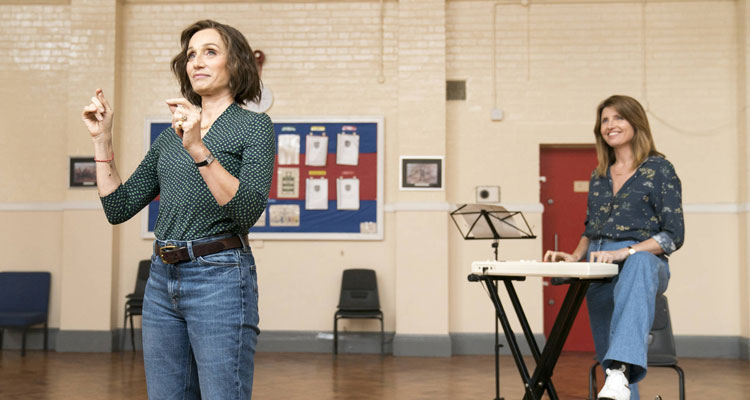 In short: Hits the right notes

The Plot: It’s tough being away from your loved one at a time of war. Kate (Kristin Scott Thomas) knows this only too well, having lost a son to the war in Afghanistan. Together with best friend Lisa (Sharon Horgan), the duo find ways to unite and keep busy the wives of their serving officers on the military base that they live on. It might distract them from worries about broken-down communications or bad news from abroad. After several failed suggestions, they settle on a singing group. However, Kate has more formal ideas about turning the disparate bunch into a choir while Lisa adopts a more casual approach. They’ll have to find a way forward if they’re going to sing together at the Festival of Remembrance at the Albert Hall in London…

The Verdict: Fisherman’s Friends may have started a trend. That is, about non-professional singers in a local community going on to become national legends. One of last year’s unlikely sleeper hits, it had the right amount of charm and rustic humour. There’s a similar vein of humour running through new film Military Wives. If audiences most likely embrace it, then this cheery, feel-good film should also be a hit. It’s inspired by the stories of over 75 military wives choirs that sprung up in the UK and much further afield – as the end credits attest. Rosanne Flynn and Rachel Tunnard’s script is a composite of these stories, built around the testy friendship between Kate and Lisa. They’re two best friends who have been through trying times, but use their leadership talents to give the choir some purpose.

Their first attempts at singing at choir practice are not so successful, with Lisa dismissing it as the incantations of a bunch of witches. Over time, they find a hidden talent in the group – a soloist with the voice of an angel. This spurs on the others to work harder. The film’s greatest strength is not in the ensemble of warbling women but in the at-times fractious friendship between Kate and Lisa. Kristin Scott Thomas is cast as another ice queen with a rigid set of ideas about what needs to be done and how to do it right. Our own Sharon Horgan is an ideal foil to that, the heart of the group who goes on instinct and gut feeling. It’s a fascinating contrast of personalities and both actors give it their all, despite some fairly basic plotting going on to get the characters from A to B to apparent success. A wonky car is even thrown awkwardly in as a last-minute obstacle.

Horgan’s star is no doubt in the ascendant. After her scene-stealing turn in Game Night, she’s also the producing brains behind housing crisis drama Herself – which met with acclaim at Sundance recently. For Military Wives, she and Scott-Thomas work hard to get across the idea that separately they can’t unite the group of women. It’s only by working together that they complement each other’s personalities and approaches to leadership. There’s a cosy warmth and familiarity to this story, the kind of safe film that you can bring your mother too. Think Calendar Girls but with singing instead of stripping. Director Peter Cattaneo, returning to features after an absence of 12 years, knows a thing or two about that as he directed The Full Monty. He gets the right level of humour, with his cast singing their hearts out over a song stitched together from thoughts in letters to the soldiers. There’s a moving and heartfelt thought-process at work here, which raises it slightly above average. Military Wives hits the right notes and should leave audiences with a warm, fuzzy feeling afterwards.