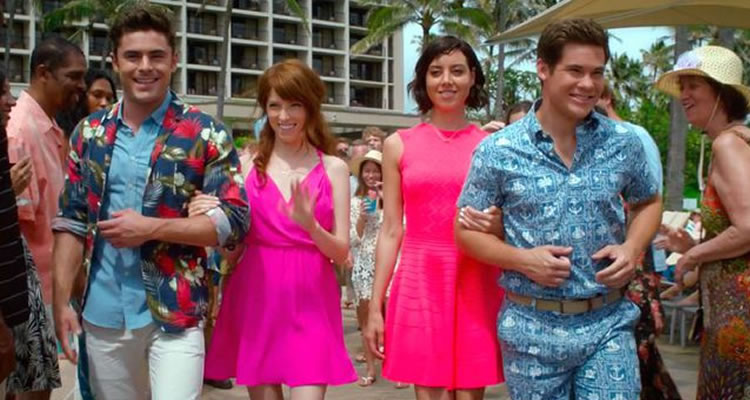 MIKE AND DAVE NEED WEDDING DATES (USA/16/98mins)
Directed by Jake Szymanski. Starring Zac Efron, Adam Devine, Anna Kendrick, Aubrey Plaza, Stephen Root.
THE PLOT: When their parents demand they bring dates to their sister’s wedding, Mike (Adam Devine) and Dave (Zac Efron) turn to craigslist to find some “nice” girls that will tone down their antics. In need of a change, and of course a free trip to Hawaii, Alice (Anna Kendrick) and Tatiana (Aubrey Plaza) hide their real personalities to make sure they are the dates chosen.
THE VERDICT: Inspired by the true story of Mike and Dave Stangle turning to the internet to find wedding dates and their story going viral, Mike and Dave Need Wedding Dates is a film that tries incredibly hard to be funny, unfortunately for the talented comedians involved, the evidence of this struggle is all too evident in this unfunny and cringeworthy film.
Zac Efron is no stranger to comedy, and regularly pokes fun at himself in his movies, and ‘Mike and Dave Need Wedding Dates’ is no exception. Efron has great chemistry with the rest of the cast, but this does not lead to laughs, unfortunately. Adam Devine plays Mike as a spoiled, screechy brat, and while this works in the TV show ‘Workaholics’ that gave Devine his break, this petulant act soon becomes tiresome in this wedding comedy. Aubrey Plaza obviously has a ball playing a character very different to those we have seen her play before – her most famous character, April on ‘Parks & Recreation’ and many of her others are sarcastic and unenthused about everything in their lives – but this loud mouthed and vulgar character is no more funny than the others in the film. The same goes for Anna Kendrick, who has fun with the dim Alice, but rarely manages to make the character anything other than annoying. The rest of the cast features Stephen Root, Sugar Lyn Beard and Kumail Nanjiani.
Screenwriters Andrew Jay Cohen and Brendan O’Brien have taken Mike and Dave Stangle’s story – which, unlike the film, was all about the lead up to the wedding, not the shenanigans the brothers got up to at the actual event – shifts the focus of the film to the wedding, and seems to delight in making the girls as loudmouthed, crass and emotionally unengaged as the boys. While it is clear that this worked on paper since Kendrick and Plaza signed on for the film, this makes the film one full of unlikeable characters, crass and unfunny dialogue and situations that escalate but never manage to provoke giggles.
As director, Jake Szymanski paces the film badly, and never allows the characters to seem emotionally rounded, instead focusing on putting the characters into one ridiculous, over the top and unfunny situation after another. There seems to be a focus given to improvised scenes throughout the film, which means that every attempt at a joke is drawn out and painful. Add to this a very formulaic flow to the story means that ‘Mike and Dave Need Wedding Dates’ is not only very far from the truth, but also drawn out and unfunny.
In all, ‘Mike and Dave Need Wedding Dates’ is a waste of a strong cast and although the characters work well enough together, they are let down by never being fleshed out, allowed to learn from their experiences and a sincere and troubling lack of laughs in this wedding crashing “comedy”.
RATING: 1/5
Review by Brogen Hayes