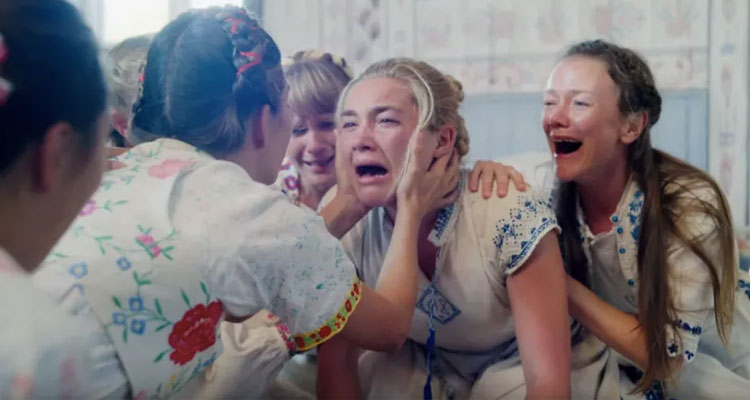 The Plot: Dani (Florence Pugh) is in deep grief after a family tragedy. Her long-term boyfriend Christian (Jack Reynor) has to contend with this, while his friends Mark (Will Poulter) and Josh (William Jackson Harper) suggest that he needs to get out of this relationship that’s already in crisis. At the invitation of Swedish friend Pelle (Vilhelm Blomgren), Christian needs a temporary escape and decides to go to a Swedish midsummer festival run by Pelle’s family. Dani decides to come along in the hope of a break too. Bad idea. Pelle’s relatives run a once-in-a-lifetime festival in rural Sweden which involves traditional rituals and dressing up. But as Christian, Dani and their friends discover, cultural differences take on a new, terrifying meaning…

The Verdict: Ari Aster announced himself on the world stage in grand style last year with his stunning feature debut Hereditary. With shades of Stanley Kubrick, it was a tightly wound dissection of a grieving family slowly disintegrating and then imploding in a riot of grisly images and taut, carefully calibrated scares. This is a director who doesn’t believe in the cheapening effect often associated with horror films, which are often by-the-numbers affairs. He’s more interested in digging under your skin, making you sit uncomfortably and then disturbing you rather than delivering outright scares. His second film Midsommar comfortably overcomes that difficult second album syndrome. It’s as intensely impressive as Hereditary, but also wildly different – as it should be.

The lengthy running time (unusual for a horror film) may initially come across as indulgent, but Aster uses his time wisely. He sets up our two lead characters and their predicament with enough detail to hint at the troubles brewing under the surface, but without the need for unnecessary backstory. Dani does not take kindly to bad news and traumatic events, so it’s interesting to observe how her character arc changes in gradual increments. Christian is her rock, but even he’s becoming weary of her waves of grief crashing down on him. Aster could be the new master of slowburn suspense and horror (a rival to Michael Haneke), as he teases out this crumbling relationship when it’s tested by the events of the midsummer festival. It’s enough to say that death is involved, with a nod to classic folk horror of yore like The Wicker Man (the original of course).

As both writer and director, Aster’s own take on folk horror is his own though. Early on, he conjures up an idyllic rustic landscape in Sweden which seems innocuous enough. The set design in the commune is particularly brilliant, all sharp angles in the buildings, detailed interiors and carefully choreographed dinner scenes which have an unnatural sense of order to them. It may be out in the open, but the commune is a prison of sorts. As Aster turns the screws on his non-Swedish characters, they’re seduced into this strange lifestyle and its daily rituals. Unlike last year’s flawed Suspiria remake, keeping that sustained tension for so long and then releasing it in an explosion of violence proves to work in Aster’s favour. Every scene, no matter how bizarre, is earned and progresses the story to a satisfying conclusion.

Particular mention must go to Pugh. Having already established herself as an actor of note in Lady Macbeth, she goes full tilt into Dani’s neuroses and manages to keep her sympathetic. A difficult role like this requires an actor to immerse and she does so in suitable style. Aster sure knows how to direct a film within an inch of its life, but also make his story an involving experience for his audience. It will likely infuriate some people, just as Hereditary did. But those already attuned to his particular style of slowburn filmmaking will come out rewarded and eager to see what he has in store next. No doubt it will be something wildly different again. To borrow a Rocky Horror phrase, Midsommar is fabulous & freaky.