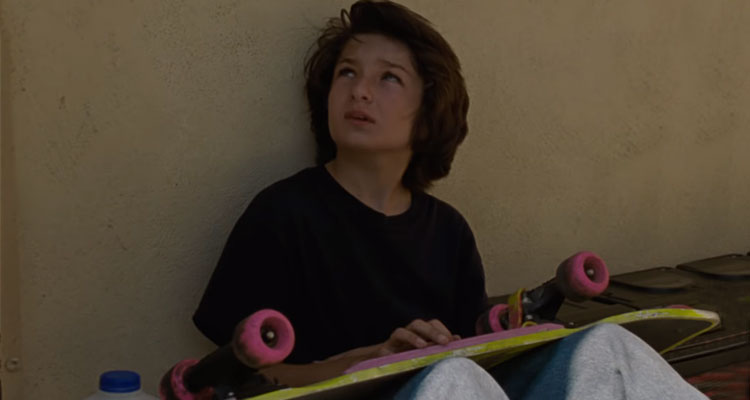 In short: Coming of age gem

The Plot: Los Angeles, the mid-1990s. 13-year-old Stevie (Sunny Suljic) lives with his mother Dabney (Katherine Waterston) and his sulky older brother Ian (Lucas Hedges), who occasionally beats him up. Stevie is tougher than he looks though and realises that he’ll have to man up to survive these difficult teen years. He falls in with a group of older boys, skateboarders who hang out around Ray (Na-Kel Smith), who runs his own skate shop. They’ve already experienced the things that Stevie has not – smoking, drugs, girls… He’s impressed by them and tries to fit in by learning how to skate – not always successfully. Dubbing him ‘Sunburn’, Ray and the group become the family who are more accepting of him than his own…

The Verdict: Jonah Hill was once known as the tubby funny guy, the sidekick who got the best lines if not always the girl. Brewing underneath the surface though was a deeper talent for acting. He lost a lot of weight, worked with high-profile directors like Martin Scorsese and scored two well-deserved Oscar nominations. You’d think he might be content with that, but no. He’s now turned to writing and directing his first feature, Mid90s. It’s a vibrant slice of L.A. street life, drawing from Hill’s own teenage experiences skateboarding at that time period. But this isn’t a nostalgic trip down memory lane for the director. If anything, it’s a lively coming-of-age story with the smooth edges sanded off to give it a slightly rough but authentic impression.

Hill’s attention to detail here is commendable. Shooting on 16mm film and in the boxy Academy ratio, it instantly comes across as an independent American film from that time period. The kind that might sit comfortably beside a Kevin Smith film like Clerks on a Blockbuster video shelf. Even a projectionist at a test screening remarked on how cool it was that they were screening a film from the 1990s. The lo-fi look of the film, which even has occasional specks of dirt on the supposedly pristine digital print, suits it well. Hill has a real eye for framing his actors within the confines of their environment, beautifully capturing a skating sequence down a freeway. It leaves the impression of how wonderful it is to be young and free from the adult worries yet to come. The film also sounds great too, with Hill picking some great songs from the era to back-up his painterly eye.

At the heart of it though, this is a film about the bonds of friendship and how your friends can get you through the trials of the teenage years. Stevie’s skateboarding slacker friends are a motley bunch, who go by nicknames like Fourth Grade. They’re a loyal bunch of likeable dudes though. The most touching moment comes when the disapproving Dabney observes them loyally hanging around a hospital waiting room. While Hill does explore the temptations of those teenage years, he does so in a more natural way than, say, Larry Clark’s provocative Kids – also from that era. There’s an easy charm to these characters which makes them enjoyable company and Suljic is a real find as a young actor. Although the film ends on a perfect note, it almost ends too quickly. This reviewer could easily have hung out with this gang for another half hour. Hill can now adding writing and directing to his considerable talents. Mid90s is a coming-of-age gem worth savouring.