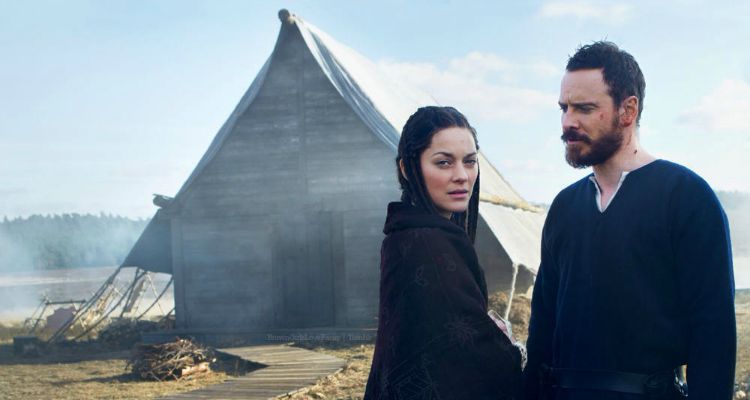 This week, our own Michael Fassbender takes on one of the most iconic, powerful and feared roles in history; Macbeth. Filling the shoes of Orson Welles, Ian McKellen and Patrick Stewart – to name but a few – must have been a terrifying prospect, so we caught up with Fassbender to find out just how daunting the role was.

What was the most challenging part of making MACBETH?
Michael Fassbender: I guess dealing with the language first. It’s a bit rich me saying that, seeing as Marion [Cotillard] tackled it! [laughs] It starts with the language; that was a puzzle, to try and break the rhythm of that and find the Rhythm. Then, just to make sure that all avenues on the day were explored. I think it’s a very uplifting thing about Shakespeare, the fact that there’s so many different ways that you can do it, a thousand different choices. The language can always be interpreted in different ways. It was kind of depressing, at the end of the day, to think ‘did we explore everything?’, but also uplifting and, I think, a testament to Shakespeare. That’s why we are still doing the play today; because the language is so extraordinary, and the tale is so extraordinary.

Did you feel pressure in taking on the role of Macbeth? Did you revisit other versions of the story such as Orson Welles, David Bradley or Roman Polanski’s films?
MF: Yes, it was pretty terrifying, the prospect of doing it. Once you start your preparation, start to get into the workload of it, that starts to take over and I think the best solution for nerves is work [laughs] so I just immersed myself in the script and got on with it. I did visit other renditions of the story; whatever was available I watched. I figure, if it’s out there, gather the information, it can only help. Kurosawa [‘The Throne of Blood’] was my favourite of all of them.

When you are playing someone who has to kill so many people, does it take a toll on your psyche? How do you prepare for a role like this?
MF: I came across this play twice before I took this on. I came across it at 15, it was part of the curriculum at school and then once again, when I was in drama school, but never did it occur to me that this character is suffering from post traumatic stress disorder, it was Justin who said it to me in one of our first conversations. That changed everything for me. It’s not only the killing of many people, or you have a soldier that’s engaged in battle month in month out, day after day, but the fact that the battle takes place with his bare hands. The sword is the weapon of choice, and what it takes to pierce somebody’s skin, drive the sword through somebody’s muscle, break through their bone and pull the sword out again. If the sword fails, pick up a rock, smash someone’s skull… Those kind of images I tried to dig up and explore to try to find that fractured character right at the beginning. The fact that he is seeing hallucinations, we know from soldiers today coming back from Iraq or Afghanistan who describe post traumatic stress disorder, and the fact that they have these hallucinations… That made so much sense from the beginning, the fact that is he seeing the witches – are they there are they not? – and his unhinged behaviour.

Was it hard to walk away from the character at the end of the day’s shooting?
MF: It’s inevitable that some residue is there, but I worked hard to try and leave everything on the floor on the day. I spend a lot of time in preparation so when I come to the day’s filming, I can just really leave everything there, and explore everything on the day as much as possible. Of course, when you go home all the good ideas come, but I try to meet friends at the end of the day, and I wouldn’t have many left…! [laughs] But inevitably, there is a residue.

What were the best and worst things about shooting in Scotland?
MF: Whisky and whisky! [laughs]

Do you feel there is a lesson for today’s society in Macbeth about the danger of ambition?
MF: It’s hard for me… I think what was so special about how Marion played the part was that we’re used to this idea of a manipulative, ambitious woman and I found she brought such loneliness to the character; I felt that she was so alone. Her husband is out campaigning, they don’t see each other for six to 12 months, they’ve had this loss… She’s such a sacrificial character, she gives herself up to whatever supernatural forces are out there to take away her maternal instincts, to be able to drive through this heinous act, in order to save their union, in order to bring them some way closer together. The ambition… Yes, they wish for something, they think that this’ll change everything in their relationship; that they will be lifted out of this bleak existence, and it’s just not the same. It’s the classic scenario of be careful what you wish for. It’s the violence in it that sticks with me so much, and the loss; these characters have lost so much and this is a desperate attempt to forge this relationship, to try and in some way put it back on the rails, because it has been so badly derailed. I think it’s more than ambition, but yes ambition is a dangerous thing, we all know that. We can see it in the world that we live in today. Greed and ambition, and what that entails.

You have worked with so many talented women, what was it like to work with Marion Cotillard?
MF: I think Marion is the best in the business. She brings a grace to everything that she does, which is just within her. At the same time, she is very human, and I think when she portrays a character the audience has something of a mirror in front of them, and they can see elements of themselves in her. For the portrayal of [Lady Macbeth] there was so much humanity in her, just to be standing opposite her in scenes, she is just the most engaged partner, somebody that is listening. It seems like such a simple thing, but the best actors are great listeners, and she listens so brilliantly and responds to whatever life is happening in the moment, and is very generous then in return. She will take something, use it, form it then give something back to you, if that makes any sense. It’s very easy. We worked comprehensively together in rehearsal, but once we started filming we didn’t discuss things, we just presented them when the camera was rolling. I really enjoyed that way of working and it was an absolute privilege to work with her.

Can you speculate as to your version of Macbeth’s place in the cinematic world today?
MF: It’s the classic tale in terms of Duncan is the King, and enjoys the spoils of that position, and Macbeth is his General, who keeps the borders safe and keeps his Kingship alive, without the spoils of being a king. So, I think we have seen that kind of tale in real life, in history and in drama and stories quite a lot, so that was a knowing place to start from. I think he’s somebody that is very fractured from the beginning because of his job, because he’s a soldier and because he has not been allowed to mourn with his wife the death of at least one of their children. All these things sort of culminate together. I think this story is about loss. People always talk about it as a tale of ambition; yes, that’s true, but I think it’s a story of loss. The loss of the relationship between a couple, the loss of their child and the loss of their sanity.

MACBETH is released in Irish cinemas on October 2nd 2015