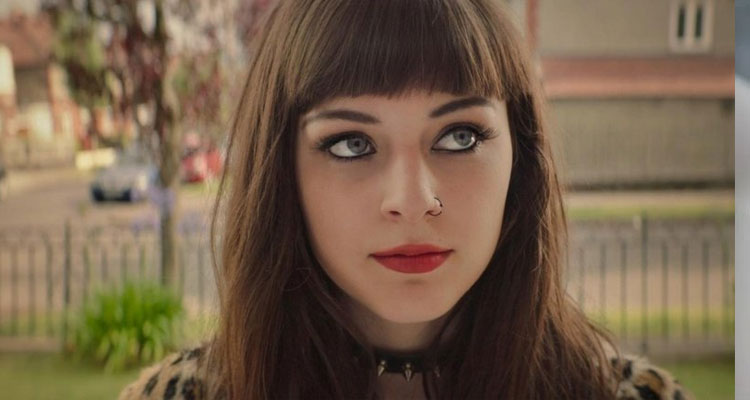 The Plot: Emma (Jordanne Jones) and Chantal (Leah McNamara) are fraternal twin sisters. They were born at the same time, but don’t look the same. That essential difference extends to pretty much everything else in their lives. Chantal is the popular one with big plans for the rest of her life. Emma is a Goth loner who dreams of starting a band with her best friend Gary (Sean Doyle), a similar soul who hasn’t built up the courage to tell her his true feelings. While they wait for their Leaving Cert results and a final move into the adult world, they spend a summer together while their parents are away. The return of neighbour Dan (Moe Dunford) stirs things up, as he has certain notions of how Emma might move forward with her uncertain life…

The Verdict: Dublin-born Hugh O’Conor has been acting for 35 years. Like some actors, he’s got the itch to get behind the camera and tell stories with his own directorial voice. His feature debut Metal Heart is an auspicious one, in that it shows a lightness of touch, a firm command of his  actors and a knowing sense of that difficult transition from a teenager to an adult. It’s a familiar coming-of-age set-up given an Irish twist, which might have amused the late, great John Hughes – who pretty much set the template for the modern teen movie. O’Conor’s contribution to the genre is a chalk-and-cheese story about two very different sisters who find common ground over the course of a summer spent in and out of their family home.

The script, by Paul Murray, sides with Emma early on and it’s her authentic voice that comes through for the duration of the film. She’s drawn to older neighbour Dan, who once played in a band that never made it. His failings and bitterness with how his life have played out are an interesting counter-point to Emma’s youthful aspirations. She’s wise beyond her years – something which Dan is slow to pick up and to his detriment. That’s not to say that Chantal is neglected by Murray, though he often uses her for comic relief (she’s a bit shallow and has a dim boyfriend). His script moves back and forth between the sisters and their lives, as Emma grows in confidence and starts to take on aspects of Chantal’s personality.

It’s this change in Emma’s personality that jars somewhat. The young woman we met early on  changes over the course of the film. It’s a natural character arc for any coming-of-age story, but did it have to be so blunt at times? Some of the plot developments involving Dan show Emma making uncharacteristically bad decisions, to the point that another characters says that he misses the old Emma. So did this reviewer. Still, Jordanne Jones’ excellent onscreen work stabilises the more wobbly elements of the script. Having impressed greatly in Frank Berry’s 2014 film I Used To Live Here, her second film shows a growing maturity and depth to her talent. She’s surrounded by a talented young cast, but she’s the real star here. This Metal Heart beats strongly and is an engaging portrait of a teenage outcast who finds her voice.