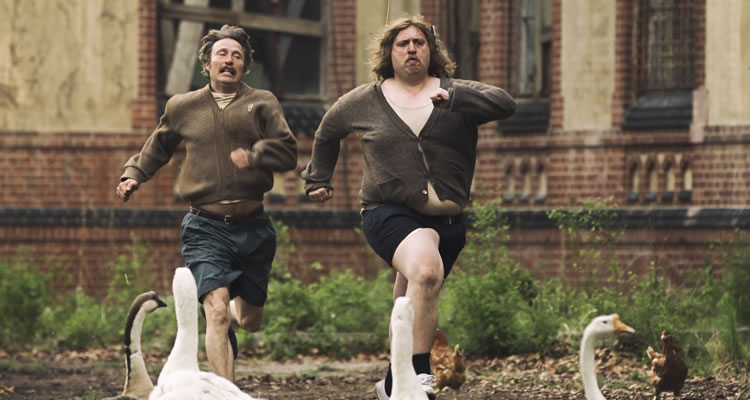 MEN & CHICKEN (Denmark | Germany/15A/104mins)
Directed by Anders Thomas Jensen. Starring David Dencik, Mads Mikkelsen, Nikolaj Lie Kaas, Søren Malling, Nicolas Bro.
THE PLOT: When their father dies, Elias (Mads Mikkelsen) and Gabriel (David Dencik) discover that their father was not their biological father, and they had different mothers. Armed with this knowledge, the two seek out their biological father on the small island of Ork – population 42 – and find a host of other brothers and a lot of secrets.
THE VERDICT: Men and Chicken is an odd film; starting off with a slapstick, Three Stooges feel, there are plenty of laughs to be had. However, as the film goes on, it takes a turn for he even more absurd and wraps itself up in a way that is not entirely satisfying.
Mads Mikkelsen is on wonderful form here, playing against type and obviously relishing the opportunity. Mikkelsen obviously found a way to relate to his self involved, compulsive masturbating character, and while the audience may not always understand him, Mikkelsen does, and this brings the character to life. David Dencik plays the more sober, thoughtful of all the brothers, trying to control the madcap, violent and impatient way in which they all live their lives, and it is through Dencik as Gabriel that we see much of the film. The rest of the brothers are played by Nikolaj Lie Kaas, Søren Malling and Nicolas Bro, and it is obvious that there was a lot of character work done for the film, since each of them feels rounded and real, although completely alien and outside of the audience’s experience.
‘Men and Chicken’ is the fourth film written and directed by Anders Thomas Jensen, and reunites Mads Mikkelsen, Nikolaj Lie Kaas and Ole Thestrup, who have appeared in all four. The story of the film is wonderful and weird, and makes great use of the space where the film was shot. The former sanatorium which, trivia time, was once where Hitler was treated, is beautifully cinematic, and this crumbling building is more than enough of a metaphor for the crumbling family that lives within its walls. Anders Thomas Jensen makes sure that a feeling of unsettled weirdness permeates the film, from Elias’ compulsion to masturbate to Gabriel’s compulsion to dry retch every few minutes, there is a lot more going on here than adult children trying to find their father. The film meanders through the revelations at times, and the pacing feels slow and almost sluggish, but the final act of the film changes everything, as secrets are revealed and the tone of the film shifts from comedy to horror.
In all, ‘Men and Chicken’ is an odd, odd, odd film about finding the place where you belong. Mikkelsen has rarely been better, and the entire cast obviously relished the chance to throw themselves into this odd and unsettling film. The problems arise with the pacing and story of the film, which often feel unsatisfactory and unfinished.
RATING: 2.5/5
Review by Brogen Hayes