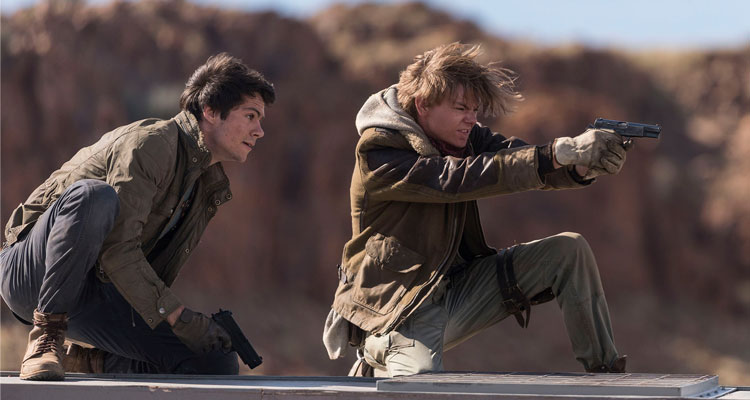 Maze Runner: The Death Cure (USA / 12A / 141 mins)
Directed by Wes Ball. Starring Dylan O’Brien, Kaya Scodelario, Thomas Brodie-Sangster, Aidan Gillen, Patricia Clarkson, Ki Hong Lee.
THE PLOT: Gladers Thomas (Dylan O’Brien) and Newt (Thomas Brodie-Sangster) have set out to rescue their remaining friends, including Minho (Ki Hong Lee), from the nefarious hands of WCKD. Ava (Patricia Clarkson) and her right-hand man Janson (Aidan Gillen) want to use the survivors as guinea pigs to find a cure for the Flare virus, which has turned two-thirds of the human population into rabid zombies. Thomas has a choice to run for safety or to confront WCKD and the traitor in their midst – former Glader Teresa (Kaya Scodelario). A reckoning is coming… but will there be enough time?
THE VERDICT: Adaptations of Young Adult novels peaked a few years ago, but have slowly died off. The ‘Divergent’ series barely dodged a bullet in the head, with the fourth film pawned off to a TV movie instead. These are expensive films to make, so they have to deliver. With ‘The Maze Runne’r series, it’s very much the same kettle of fish. Great first film, a middling second film that nearly flatlined and now a just-about-OK conclusion with ‘The Death Cure’.
Returning director Wes Ball wisely made the decision to only do ‘The Death Cure’ if it was one film. The temptation to split the final book by James Dashner into two films (for more profit?) clearly didn’t work for ‘Divergent’, so what we have is essentially a conclusion over a longer running time. The good stuff involves the acting, which is consistently good across the trilogy. The younger actors play off well against more established talent like Clarkson, Gillen, Barry Pepper and Giancarlo Esposito. There is a clear drive in the plot too, which has more direction than The Scorch Trials and less of the meandering around in the wasteland.
The not-so-good stuff boils down to the fact that once out of The Glade, the characters and outside environment involving The Last City where WCKD have their ivory tower just isn’t as interesting as before. There’s a lot of rushing around corridors, shoot-outs, explosions in crumbling buildings and predictable last-minute saves. All stuff we’ve seen before, so Ball has nothing new to add here. The near-year-long hiatus in production to allow O’Brien to recover from an on-set injury sure didn’t go to the script. Well, except for one ballsy, stand-out sequence involving a bus which prompts the only laugh in the film.
Despite some good action, nothing quite matches the intensity and surprises of the first film. Looking behind the wizard’s curtain might not have been so wise, but that’s the nature of diminishing returns in film trilogies (a similar fate befell ‘The Hunger Games’). ‘The Death Cure’ is passable enough, but it’s a by-the-numbers film aimed more at fans eagerly anticipating a sequel rather than casual viewers. Not so a-mazing.
RATING: 2.5 / 5
Review by Gareth O’Connor

Review by Gareth O'Connor
2
Not so a-mazing