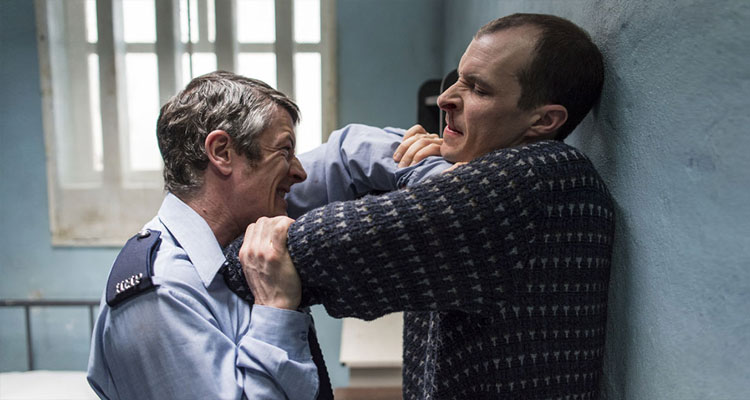 Based on the true events of the 1983 mass break-out of 38 IRA prisoners from HMP Maze high-security prison in Northern Ireland. ‘Maze’ tells the story of Larry Marley (Tom Vaughan-Lawlor), the chief architect of the escape, and his relationship with prison warder, Gordon Close (Barry Ward) who may be unwittingly useful for the escape plan.

Great, yeah. I’ve been a big fan of their work for a long time, and I’d met them both before socially and really liked them as people. It was just really great working with them, and they both have very different approaches, but they’re two of the finest actors working in Ireland at the moment or anywhere really. We had a lot of fun, a lot of good craic on set. It was a lot of men in small confined spaces, so it was a bit like a football dressing room so spirits were high and it was all good fun.

How was it working with director and writer Stephen Burke?

Fantastic, I’ve known Stephen for a little bit through his wife Jane Doolan, the producer. I made a movie with her in Sardinia three or four years back, so I hung around with Stephen a bit then, and he had mentioned Maze to me, and I read his novels that I think are really strong, the Good Italian, so I knew him a bit socially, and I think he’s a fantastic writer so when he sent me that script I was thrilled to be a part of it. I thought it was a real strong piece of writing.

He’s pretty hands off as a director, and I think a lot of the times that’s a good way to go. Some directors cane be more full on, and he let me and Tom do our thing and I think we had spent quite a bit of time going through the script beforehand and the rehearsal process so we were very clear on what we had to do really, and I think it was all so present in the script that he had written that it was a very clear guideline for both myself and Tom as to how we should perform.

You filmed atvthe actual Cork prison location did it help build your character because you were working in such a claustrophobic environment?

Yeah big time, I think the more real the setting can be the easier the actor’s job is. You don’t have to rely so much on your imagination you just have to respond to what is really around you which I think can make for better performances. Yeah, Cork prison became available because they were moving the prisoners across the road to newer, better facilities so we had this big empty prison which you’re coming into every day so you get a real sense of what it must have felt like for my character who is constantly going in and out every day. It becomes quite claustrophobic very quickly now in fairness it wasn’t as packed full of people as a real functioning prison, and it was quieter and more spacious. Yeah, it was just cold walls and hard and nothing warm about it, but it definitely helped for the job we were doing.

What kind of preparation did you put into the role of Gordon?

I tend to read about politics of the day and news events of the day. It’s always literature for me, I dive into books, even fiction of the day and non fiction. I read some reports on pyshological states of prison wardens and a lot of contemporary reports in the US that has been written about it because they have such a massive prison system over there. It’s one of the most stressful jobs there is and high suicide rates and high rates of mental diseases and physical diseasesso I read a lot about the life of prison wardens and for Maze I really thought I’m quite a slight guy and prison wardens and guards used to be big burly men. There height restrictions and weight restrictions so I had to put on some weight as well because I wanted to look physically imposing against Tom who is losing weight because his character is coming off the hunger strikes. The weight loss and gain was charted that both Larry and Gordons wold converge and go in different directions and cross at one point. That was something we spoke about in rehearsals.

Growing up in the 80’s do you remember hearing about and this and learning this event in school?

No not at all, I was three or four when it happened when that all took part and politics really wasn’t on my radar and then in scholl you brush over these things. You might get half a bloody page of a textbook dedicated to the hunger strikers or something but it was all in passing. Since then as an adult I’ve done quite a lot of work in the North, there’s a lot of productions going on there, there’s a very vibrant film industry there at the moment so I’ve spent quite a bit of time there over the last couple of years and I think given the time that has elapsed between these events now it seems to me that people are a lot more comfortable portraying them in fiction or drama and dealing with these subjects a bit more head on which is great because there are some brilliant stories to be told and to be mined from that whole period and so all these jobs that I constantly have to research and look into have made me something of an expert at this stage.

We know Larry Marley (Lawlor) was actually part of the IRA. Was Gordon an actual warden at the prison?

No Gordon is an amalgumation of real life prison wardens, so he was mostly taken from Stephen’s imagination but we did read up on an official report of the escape and biographical accounts of some of the wardens so we dipped into some of the real life stuff to pad out the character of Gordon.

What was it like filming the final act of Maze?

Filming the actual breakout was a lot of fun. It’s action you know and it was a load of burly men dressed in various garbs, some dresed as prisoners, some as wardens all rushing towards a gate and me in the middle of it. It’s very visceral and there’s not much acting required and it’s fun and you get to jump around and wrestle people and the stuntmen are in and you know it breaks up the other stuff we’d been doing. Yeah it was a lot of fun and it was exciting and you get a sense of what it was like because it felt like the stuff of games you’d play as a boy. It’s been glamorised in movies through the years and it seems like a hell of a lot of fun doesn’t it?

It does because there was a certain kind of finesse to it but it was still very clumsy.

Yeah, and which was the reality of course because not everything went so smoothly so they had to improvise a bit and it felt like something could go tits up and ruin everything.

What do you think the reasons are for telling a story like this, that draws audience’s in?

Well it’s conflict isn’t it? Most drama involves conflict and there was a hell of a lot of it for a long time and peace has been established for long enough for people to be comfortable enough to talk about what went on in the past and to make sense of it as well I think. It’s still very grey and murky and it’s still different sides who view things very differently and I think it’s a great, healthy, mature way of trying to deal with those different views through art and story and in various art forms.

What went into building the relationship between yourself and Tom?

We hung out a lot together and it all fed into the filming of it and we were all living next door to each other. Spending a lot of downtime together and then we’d rehearse scenes together right before shotting them, performing line runs and as I said earlier it was pretty clear in the writing what was their trajectory and their relationship. We went through the script and pointed out the journey of their relationship and when the thawing starts to occur and when trust has been almost entirely gained and when I begin to suspect that it was a ploy all along. It’s like anything in acting you’re trying to figure out what the character knows at any given moment and what he learns as he goes along. We were both concerned about knowing looks and lingering looks which I think has all been pared back for the actual film. It was a lot more present on the page but for various reasons, some of it was taken out because myself and Tom were worried that it might become something of a bromance because of two guys constantly eyeing each other up.

What was fascinating about that dynamic was how whenever you two were having your conversations and Tom turned, his eyes would go dead like a shark preparing to attack his prey. It’s an amazing rapport between you two.

Yeah it’s an amazing story and Stephen captured it really brilliantly on the page but that is how it came about. It was a war strategy that the IRA had employed to befriend someof these wardens who were such sworn enemies for such a long time. It was a brave thing to do and it may have appeared to be total folly but it obviously worked and in real life it was done over the course of two years. It was a two year plan that they implemented a lot of that time was spent gaining the trust of the wardens so it was like high tech psychological warfare.

Did you learn anything about this time in history that you didn’t already know about?

I was just horrified from what I learned, the atrocities on both sides and now I’ve got a young kid and I’m living in Londonand reading about Belfast a place I know now very very welland the stuff that was just going on on the streets and it’s horrifying. Up until recent years I wouldn’t have hadsuch a grasp on that. I guess as I was reading up on it I had a much more emotional response to it than I ever had and these stories of innocent bystanders getting caught up in stuff and the horrors that the police reports would entail are really gruesome.

Finally, what do you hope audiences get out of Maze once they see it?

First and foremost it’s a high octane prison breakout film so I think it’s hugely entertaining and I think Tom is fantastic as is Martin and the rest of the cast. I think it’s a great story and it’s political and I’d like to think, and audiences who have gotten to see it have echoed my thoughts, that the telling of the story is unbiased and you get see the other side and the lives of the people on the other side who were front line foot soldiers in a war but for them they were trying to do a 9 – 5 job and support their families namely the prison staff.