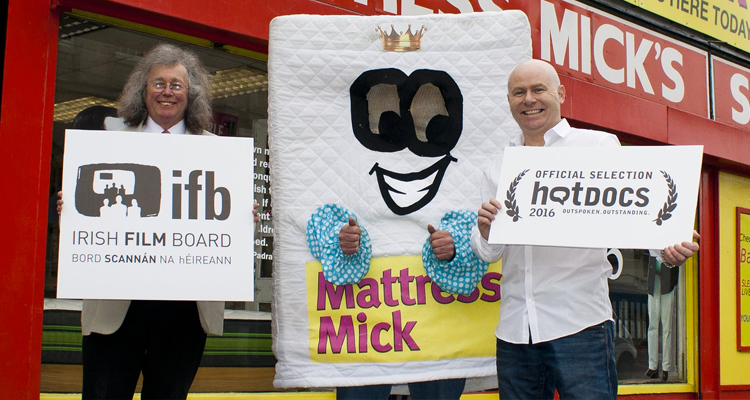 Screening on RTE this week, it’s not all fun and pillowfights being a viral hit, as the stars of the thoroughly Irish documentary Mattress Men explain to Movies.ie

It would have been very easy for Irish filmmaker Colm Quinn to make a complete Carry On of Mattress Men.

Charting the somewhat successful attempts by Dublin mattress salesman Michael Flynn and his co-conspirator Paul Kelly as they set about turning the former into the Mattress Mick brand, Quinn has before him the perfect combination of Aidan Walsh, Roddy Doyle and The Hardy Bucks.

That Mattress Men ends up being far more Ken Loach than Richie Kavanagh will surprise many. Behind the wacky viral videos and shamelessly cheap promo stunts lies a dark tale of marital breakdown, financial struggles and a major psychological wobble or two.

“The good thing is,” says Flynn today, “Colm doesn’t set out to make fun of us. He just tells the story of what happened over those years. It’s an honest record of the joy and the madness that we went through, and that’s far more interesting than just making a sitcom out of us.”

If not quite Steptoe & Son, the strange, and sometimes strained, relationship between Dublin’s self-declared mattress king and the budding publicity machine and general shopfloor salesman Paul Kelly is a fascinating one, as the latter struggles through personal and financial woes whilst pinning all his hopes on a full-time position – and a little glory – with Mattress Mick.

The film peaks with the October 2014 upload of Paul’s masterwork, a pop video entitled Back With A Bang, that quickly has Mattress Mick becoming a media sensation across the country. Having totted up 106,401 hits two years later, the last comment on this one-time viral sensation was posted one year ago.

So, we caught up with Mick and Paul, to see if they’re ready for another wave of fame…

Movies Plus: Given that it’s far from a fun promo for your brand, how do you both feel about Mattress Men?

PAUL KELLY: I love it. I think it’s honest, and it’s funny, and it’s dark. And that’s how that time was for me. That Colm was there as I went through a lot of personal challenges, and as we set out to make Mattress Mick into a major brand, was amazing. We have a record of this time for the rest of our lives.

MICK FLYNN: And we got a happy ending, which makes all the tough times seen in the movie worth all the effort.

Given the nature of the brand, and of the viral videos, people will most like expect a simple broad comedy here, but Colm goes deep. Difficult to watch at times?

MF: It is difficult, but, you have to remember, this is what happened. And we’re okay now. So, it never feels as though the world is truly falling apart, even when we’re all tired from a long day shooting a video, or we’ve just had a falling out over money missing from the shop, or whatever. This is all part of life…

PK: I reckon I’ll look back on this in years to come, and feel a certain amount of pain still, recognising what we went through at times, but the happy ending is there. And it’s there because we never gave up…

Beyond the celebrity, the key to all this was turning around a failing business – is that cunning plan still working?

MF: Absolutely. Both shops are thriving, and we’re now getting into the franchise business, with operations throughout the country. That’s partly to do with the recession being over, but it has a lot to do with the work Paul has done in getting the Mattress Mick brand out there.

PK: The great thing is, right now, if people think about getting a mattress, Mattress Mick is pretty much the first person that springs to mind in this country. That’s really down to all the work we’ve done.

We live in a time when pretty much everyone’s got an avatar, everyone’s Elvis online and Colonel Tom Parker at home, managing their public image. Does it get a little surreal for Michael Flynn when people expect you to be the slightly wacky Mattress Mick?

MF: The simple truth is, I am Mattress Mick. That guy is me. We don’t dress it up, we don’t fake the image, or the character. It was really a case of Paul letting me be me. PK: The fun side of Mick is pretty much always there. And when you’re presenting yourself to people, you certainly want to show your fun side. It’s as simple as that – Mick really is that crazy.

You guys have been pretty quiet on the YouTube front for quite a while now – cunning plans afoot, or have you run out of steam?

PK: Oh, we have lots of cunning plans. The movie will give us another opportunity to reach a whole new audience, and we’re just deciding now how best to use that. But, rest assured, there are lots of great videos to come.

MF: I think people will want to see what we get up to next, especially when the movie is out there. We’ll have to go pretty big after all this. I might have to break out the big guns. Squeeze into some spandex…