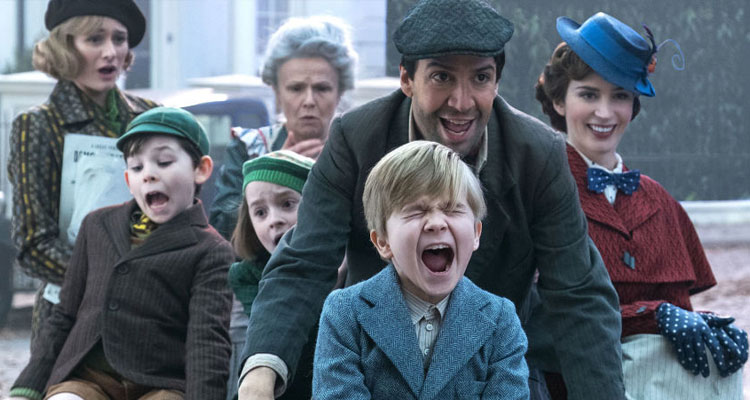 The Plot: Cherry Tree Lane, London. The Banks siblings, Michael (Ben Whishaw) and Jane (Emily Mortimer), are all grown up now and have to deal with the responsibilities of being adults. Michael is a widower who looks after his three young children, while Jane drops by to provide support. Michael is behind on his payments to the bank he works for and is at risk of losing the Banks family home in days. Michael needs a spoonful of sugar to cheer him and his children up. Enter their former magical nanny Mary Poppins (Emily Blunt) who arrives at this critical moment to help them, along with cheerful lamplighter Jack (Lin-Manuel Miranda). But with time running out to find a vital document that can save the house, can Mary make the impossible possible?

The Verdict: It’s been a long wait, the longest in live action film history. But here it finally is… A sequel to one of Disney’s most iconic and beloved films. After an absence of 54 years, Mary Poppins Returns to our screens in grand style with a new film that makes us all want to be children again. There are plenty of new faces and the welcome return of an old one, but it’s essentially a continuation from an original screenplay by David Magee, John DeLuca and director Rob Marshall. Marshall has plenty of form in musicals, having brought Broadway musicals Chicago and Into The Woods to the screen. Here, he adds some Broadway pizazz and one of its leading lights, Lin-Manuel Miranda. The result is a delightful confection that sweeps you away like a kite in the wind.

As with the original, the story is grounded in some basis of reality amid all the flights of fancy. A reality that all is too prevalent in our turbulent times – the risk of losing one’s home to a bank already overflowing with money. That’s where we find the Banks siblings, trying to keep a brave face and maintain the innocence of childhood for Michael’s children. When Mary shows up, flying out of a cloud with Michael’s old kite, there’s a warm glow of nostalgia. Thankfully, it’s not overplayed. A long-awaited sequel can’t rely entirely on audience nostalgia or it risks being accused of trying to tread on its predecessors’ toes. It has to respect what came before, but follow its own path.

Marshall achieves this in spades by coming up with imaginative fantasy sequences that have their own identity. There’s a magical journey with Mary and the children into a supposedly priceless broken bowl to fix it, resulting in a lively blend of live action and traditional 2D animation. Mary takes to the stage at one point for a Broadway-style show-stopper, with Blunt belting out some superb tunes. Speaking of whom, Blunt is spot-on casting as Mary. With Julie Andrews gracefully declining a cameo in order to let Blunt take centre stage, it’s very much Blunt’s show. She nails the character’s prim and proper attitude, but essential kindness and spirit of adventure. She also adds some of her own touches, so that her performance is more her own take and not an imitation.

While it’s tempting to say that Mary Poppins Returns is practically perfect in every way, there are some minor faults along the way. For example, the sequence with Mary’s dotty sister Topsy is something of a dud, with Meryl Streep warbling out a tune in her best impression of a crazy cat lady. Her pantomime Russian accent only adds to the strangeness of it all. But this is Mary Poppins after all, so fake accents don’t matter that much. You’re more likely to be having too much fun to notice, swept along by the spirited performances (even the kids are great), hummable tunes and a well-placed cameo from a sprightly Dick Van Dyke. There’s a lovely sense of time passing too and the importance of keeping in touch with your inner child. Mary Poppins Returns is not the equal of its predecessor (how could it?), but it’s a worthy follow-up that flies high and leaves you on a (literal) high as the credits roll.