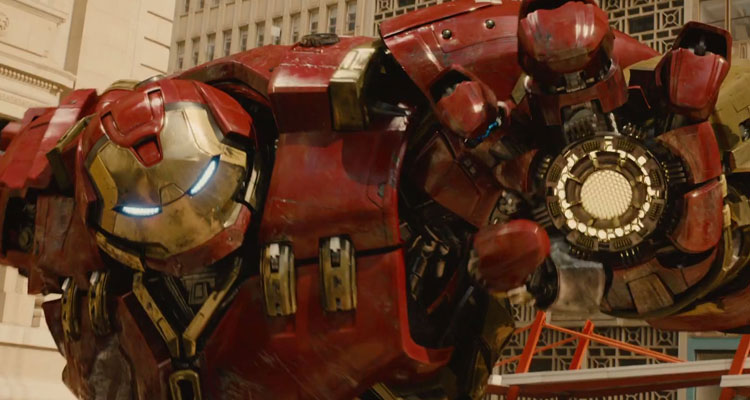 THE PLOT: In a bid to make the Avengers redundant, Tony Stark (Robert Downey Jr) sets about making global peacekeeping androids, named project Ultron. When Ultron comes into contact with Loki’s sceptre, however, it becomes self aware and bent on destruction. Of course, it is up to the Avengers to take him down.

THE VERDICT: With the first Avengers movie, way way back in 2012, Joss Whedon not only made a fun, funny and exhilarating movie, but he also cemented himself in the hearts and minds of Marvel fans everywhere. This time out, however, it seems that Whedon’s gruelling schedule has taken something of a toll on the writer/director, as some of his trademark sparkle is absent.

The gang is all back, and on spectacular form for Marvel Avengers: Age of Ultron, and new additions to the cast work well in terms of the story. Elizabeth Olsen plays Scarlet Witch, and does well with the role, making the character loyal and strong, while also creepy and scary. Aaron Taylor-Johnson does less well as Quicksilver; not only is he in the shadow of Evan Peters, who played the character wonderfully in X-Men: Days of Future Past, but he seems rather disengaged from the role, and his recurring joke becomes as irritating as his chewy accent. James Spader does incredibly well in bringing the righteous and violent Ultron to life; his voice drips malice and he is definitely a worthy foe, he just feels less solid than Loki in Avengers Assemble, perhaps because Loki had a chance to ramp up through Thor.

Whedon’s script starts out truly Whedon-esque; the opening set piece is a rollercoaster that soon gives way to plenty of silly giggles. It’s not long, however, before the film becomes almost entirely wrapped up in the action at hand, and forgets that the Marvel films are almost always infused with a sense of fun and laughter. That’s not to say that the film stops being fun, it just loses its sense of humour. Also, there is a love story injected into the mix that seems to come from nowhere, and disappear as soon as its not needed.

As director, Whedon keeps the pace of the film fast and fun, with the film rolling from set piece to set piece, with only a brief let up in the middle for some dialogue and bonding. This gives the film a sense of urgency, but it also means that eventually, the set pieces begin to blur together. The film is well shot, however, and Whedon painstakingly ensures that we know enough about Ultron and his intentions that he feels like a credible threat, just not a particularly familiar one.

In all, Marvel Avengers: Age of Ultron is a worthy follow up to the films that have gone before, and neatly sets the stage for the next Marvel tsunami that is already on the horizon. Some of the new characters work better than others, but the ensemble works incredibly well. Whedon’s trademark banter and humour sometimes gets lost among the scale and scope of the film, but Marvel Avengers: Age of Ultron ends up being almost as much fun as the one that went before, if slightly drawn out.