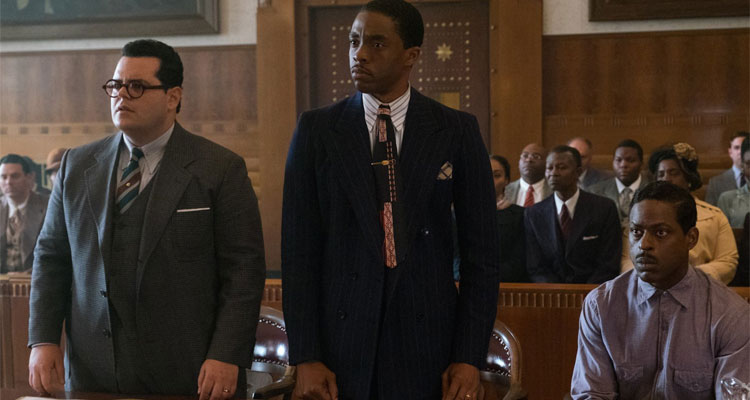 MARSHALL (USA/12A/118 mins)
Directed by Reginald Hudlin. Starring Chadwick Boseman, Josh Gad, Kate Hudson, Sterling K. Brown, Dan Stevens, James Cromwell.
THE PLOT: Thurgood Marshall (Chadwick Boseman) works as a lawyer assisting in cases where black defendants are facing a mostly white legal system. He travels to Bridgeport, Connecticut to assist in the case of Joseph (Sterling K. Brown), a black man accused of raping white married woman Eleanor (Kate Hudson). There, he teams up with local counsel Sam (Josh Gad), who is trying his first criminal case. It seems like an open-and-shut case, to the prosecution lawyer Loren (Dan Stevens) and unsympathetic Judge Foster (James Cromwell). But all is not what it seems…
THE VERDICT: Thurgood Marshall was a prominent figure in American legal history. He’s certainly familiar to this reviewer from his law school days. He was the first African-American judge on the US Supreme Court and was the leading architect in the Civil Rights movement. ‘Marshall’ the film takes a focused, confined view of the man in his earlier days, while hinting at his confidence and forthright sense of justice to come in the years that followed this case. That’s both a hindrance and a help.
It’s a help as we get to know the man before he was famous, using his eye for detail as he picks up on inconsistencies in this alleged rape case. Small ones, but enough to blow the case wide open and introduce a reasonable doubt. Director Reginald Hudlin makes good use of Boseman’s innate charm and screen presence to portray Marshall as a man who could turn cases around, while keeping him grounded and not a legal superhero.
It’s a hindrance in that we frustratingly only get this one case for two hours. In a biopic, this would only occupy an act at most, a first step towards the Civil Rights movement. With such a narrow focus, the film suffers from never really getting under the skin of the man himself. His landmark case of Brown v Board Of Education would be more interesting and relevant than this one, particularly when racial tensions are still so prevalent in the US today.
However, the good performances all round (Hudson even manages to elicit sympathy for her damaged wife) and some occasional, welcome touches of humour push the film towards a positive verdict. Using a metaphor from the film, ‘Marshall’ is a pebble with the potential to be a rock. A decent if somewhat low-key courtroom drama.
RATING: 3 / 5
Review by Gareth O’Connor