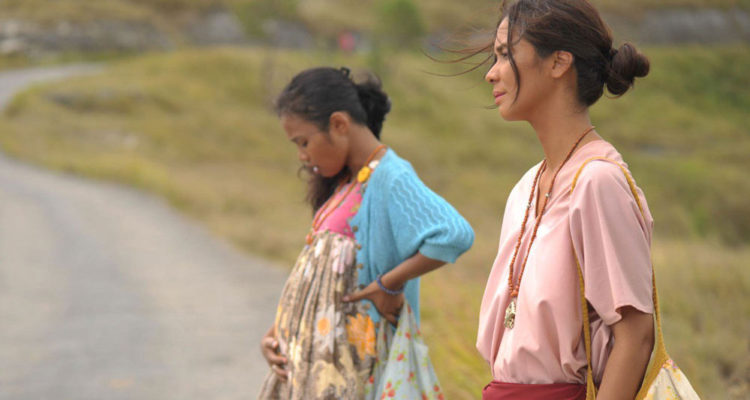 MARLINA THE MURDERER IN FOUR ACTS

MARLINA THE MURDERER IN FOUR ACTS (Indonesia / France / Malaysia / Thailand / Club / 93 mins)
Directed by Mouly Surya. Starring Marsha Timothy, Egy Fedly, Dea Panendra.
THE PLOT: Sumba, Indonesia. Marlina (Marsha Anthony) is mourning the recent death of her husband. She now lives alone in a house well out of town. One evening, Markus (Egy Fedly) arrives with his group of bandits. It appears that her husband left some debts. While two of them leave with her livestock, she’s forced to cook dinner for the remaining five. With her house occupied by unwanted intruders and a looming threat of rape, she takes action. This is just the beginning of her journey from grief to acceptance…
THE VERDICT: ‘Marlina The Murderer In Four Acts’ is a most curious film. The most succinct summation would be that it’s a neo-western Asian feminist revenge thriller. That’s only half of it though, as director and co-writer Mouly Surya also tips her hat towards Sergio Leone and Sam Peckinpah. The twanging guitar music and desolate landscapes has more than a touch of Leone. While Peckinpah may not have been known for his strong female characters, you can certainly see shades of Bring Me The Head Of Alfredo Garcia here too.
Divided by Surya into the titular four acts – ‘The Robbery’, ‘The Journey’, ‘The Confession’ and ‘The Birth’, the film charts Marlina’s journey from vengeful murderer to a form of inner peace with herself. For the remaining three quarters of the film, she walks around with Markus’ severed head as if it was an everyday object. She’s not going mad though. The fund-starved local police are of little help, so she will have to take out the remaining two bandits along with the help of her heavily-pregnant friend Novi (Dea Panendra).
This oddball mix of storylines, plot developments and gallows humour is head-scratchingly obscure at times (for example, Markus’s decapitated body appears at various intervals). The story has quite a tendency to drift at times, losing focus on our main character. However, most of the film is surprisingly accessible. The men aren’t too bright, with Markus dismissing Marlina as happy to play the victim. She’s no victim though. She dispatches the men with a cool brutality. Don’t mess with moody, broody women. If there’s another message here, it’s that in the midst of death we are in life.
‘Marlina The Murderer In Four Acts’ doesn’t come with an easy recommendation. Its obliqueness might irk at times, but that’s not uncommon in Asian cinema. However, it’s undeniably powerful and full of striking imagery which carry the story through to its ‘Thelma And Louise’-style conclusion. The late Leone and Peckinpah might just tip their spurs in approval.
RATING: 3 / 5
Review by Gareth O’Connor