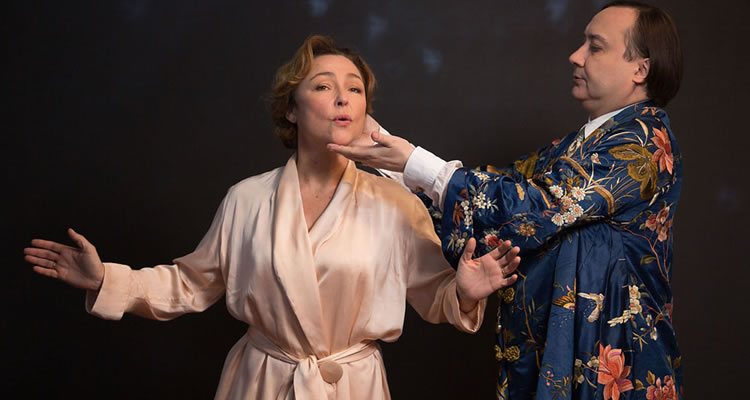 MARUERITE (France | Czech Republic | Belgium/IFI/129mins)
Directed by Xavier Giannoli. Starring Catherine Frot, Andre Marcon, Christa Théret, Denis Mpunga, Michel Fau.
THE PLOT: Directed by In Paris of the 1920s, Baroness Marguerite Dumont (Catherine Frot) has always dreamed of being a singer, the trouble is that she consistently sings off key and no-one, not even her husband, those in her music club or her eventual music coach, have the guts to tell her the truth. Spurred on by the kind words she hears, Marguerite decides to perform in front of a real audience, yet still no-one will tell her the truth.
THE VERDICT: Inspired by a real story – most probably that of Florence Foster Jenkins, whose story is making its way to the screen with Meryl Streep in the leading role – ‘Marguerite’ is a story that starts off laughable and strange, but soon becomes tragic and rather sad. The trouble is that at 129 minutes, this lovely, well made and heartwarming film becomes drawn out and overly long, losing its impact and audience attention.
Catherine Frot is luminous in the leading role as Marguerite, and it is difficult not to root for this woman who so firmly believes the things she is told. Swinging between innocence and delusion, Frot makes Marguerite endearing and tenacious; willing to do anything to have a career as a singer, and finally define herself in her own right, and not just as the wife of a powerful man. The rest of the cast features Andre Marcon, Christa Théret, Denis Mpunga and a wonderful turn from Michel Fau as Marguerite’s flamboyant and narcissistic singing teacher.
Written and directed by Xavier Giannoli, and obviously heavily inspired by the story of Florence Foster Jenkins, ‘Marguerite’ is a carefully constructed film that allows the audience to laugh at the awful screeches coming from the throat of a woman who believes herself a wonderful singer, but also allows us to fully see the fragility and innocence of the woman who believes herself a star. Giannoli never truly tells the audience just what Marguerite’s delusion is, but as the film wears on, it becomes clear that she is earnest in her beliefs, and those around her are taking advantage of her. The trouble with the film is that at 129 minutes, the conclusion feels as though it is never coming, and when it does, it feels unsatisfying.
As director, Giannoli has created a wonderful leading character in Marguerite Dumont, but everyone around her seems to be varying degrees of cruel. The films first act is well paced and engaging, and we truly get a feel for the character, and the changes she goes through throughout the film, but the second act of the film begins to drag its heels, and the finale is all too swift to engage with.
In all, ‘Marguerite’ is a story of innocence bordering on delusion, wonderfully performed by the entire cast, but none better than Catherine Frot – how talented a singer she must be to sing so terribly off key! – but the film’s running time and slightly muddled script leave it feeling drawn out and in the end, unsatisfying.
RATING: 3/5
Review by Brogen Hayes

Review by Brogen Hayes
3.5
Engaging but drawn out