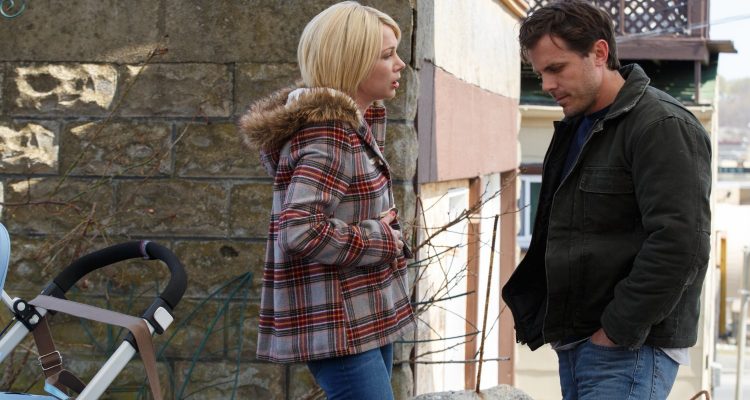 Manchester by the Sea

MANCHESTER BY THE SEA (USA/15A/137mins)
Directed by Kenneth Lonergan. Starring Casey Affleck, Michelle Williams, Ben O’Brien, Kyle Chandler, Mary Mallen
THE PLOT: Lee (Casey Affleck) is a Boston handyman who does odd jobs for local tenants. He is a quiet fellow who internalises his guilt but lashes out with his anger, sometimes at the tenants – much to the chagrin of his boss. Lee has a close relationship with his brother Joe (Kyle Chandler) and occasionally spends time with his teenage nephew Patrick (Lucas Hedges) in the seaside town of Manchester By The Sea. However, Joe dies of heart problems so Lee is called back to look after Patrick. This is when he finds out that Joe has assigned guardianship rights to him. Unprepared for this level of responsibility, Lee tries to adjust to looking after Patrick until he is old enough. Patrick is a busy guy though with two demanding girlfriends. Being back in Manchester By The Sea brings past memories to the surface for Lee, including memories of his ex-wife Randi (Michelle Williams) and a tragedy that befell them…
THE VERDICT: ‘Manchester By The Sea’ is just Kenneth Lonergan’s third film in 17 years. He first made quite an impression with ‘You Can Count On Me’ in 2000. This was followed by the overlong, troubled production Margaret. After the fraught editing room battle over that film, Lonergan could be forgiven for hanging up his director’s megaphone. However, he has returned with quiet confidence for a film that is both funny and moving in equal measures.
Originally approached by Matt Damon to write the script for which Damon would also direct and star, Lonergan has crafted a beautifully-written character piece about how the past influences the present, dealing with grief and how it affects the lives of people in many different ways. Lonergan is just the right director for this material, as he knows how to delicately balance the happy / sad nature of life, with all its ups, downs and sideways turns. Despite what seems like an initially heavy-going film about loss, the film is more amusing than it appears. It is warmly funny throughout, rather than throwing in an occasional joke to lighten the mood. The contrasting banter between the world-weary Lee and the younger, naive Patrick is a highlight.
Affleck is a revelation here, thoroughly deserving of his recent Best Actor Golden Globe. He has often been an under-rated actor who falls under the shadow of his more famous older brother. He deftly guides us through Lee’s malaise and sense of dissatisfaction in life. He is drifting and needs a purpose, an anchor for his life. He is ably supported by Hedges and the heart-breaking Williams, as well as a fine supporting cast – even the smaller roles like Broderick’s stepfather get a chance to shine.
If there is a message in the film, it is that people have the capacity to change, if they want to of course. Awkwardness is a theme running throughout the film too – nobody quite knows what to say in some scenes. That is the imperfectness of life. The overall impression of ‘Manchester By The Sea is’ that it is a genuine, sensitively written drama about how people cope with loss and change. That is something we can all relate to. Welcome back, Mr Lonergan.
RATING: 4/5
Review by Gareth O’Connor