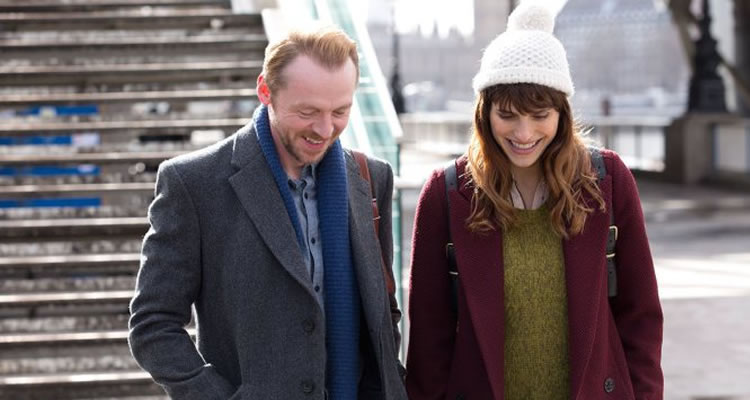 MAN UP (UK | France/15A/88mins)
Directed by Pen Palmer. Starring Simon Pegg, Lake Bell, Rory Kinnear, Ophelia Lovibond, Olivia Williams
THE PLOT: Nancy (Lake Bell) is returning from an engagement party where she was set up on a disastrous blind date when she meets a woman on the train who decides her attitude toward dating is terrible, and leaves her a self help book. As Nancy tries to return the book to the girl at Waterloo Station, she is mistaken for her, by a blind date. Rather than admit the mix up, Nancy decides to go on the date with Jack (Simon Pegg), knowing all too well that this too, could end in disaster.
THE VERDICT: Directed by Ben Palmer – of THE INBETWEENERS fame – Man Up is a film that feels uneven and overly written. Tess Morris’s script is sweet, charming and has a couple of giggles when Jack and Nancy are alone together, but once other characters are added to the equation – Rory Kinnear as Sean, a man with a crush on Nancy since high school, for example – the film suddenly tires too hard to be funny and quirky, and completely misses the mark.
Lake Bell is wonderful as the perennially single, 34 year old Nancy. The character suits Bell as an actress, and she breathes life into Nancy, making her relatable and recognisable. Simon Pegg equally does well as Jack, a divorced man who is trying his best to move on. The two have lovely chemistry together, and it is clear they enjoyed their time on screen. Rory Kinnear struggles with the over the top Sean, however, and Ophelia Lovibond never manages to make Jessica anything other than vanilla.
Tess Morris’ screenplay is filled with wit and charm, but inexplicably goes way over the top at regular intervals through the film, taking the entire shebang from charming and warm, to weird and cringey. Director Ben Palmer tries to compensate for this by making the entire film feel over the top, but it is so obvious that Jack and Nancy have a strong emotional connection, that these lower energy scenes, which form the heart of the film, don’t fit with the manic chaotic atmosphere created by the supporting characters. As well as this, the timeline of the film feels just a little off, and the climactic scene that involves a teenage house party following Jack to Nancy’s house, just feels like a rip off of LOVE, ACTUALLY.
In all, MAN UP would have been a charming little rom-com about mistaken identity if so much of the rest of the film had not been unnecessarily ramped up for the sake of laughs. Bell and Pegg are wonderful together, the soundtrack is fantastic and there is lots to love here, but MAN UP is let down by to much manic action going on in the background, and not enough time spent with the central characters.
RATING: 3/5
Review by Brogen Hayes