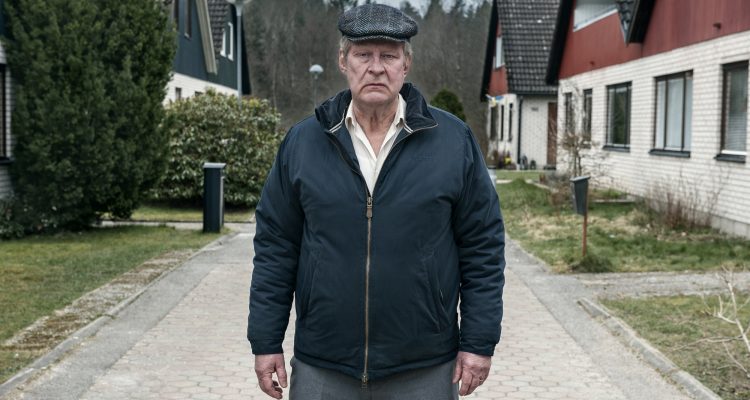 A MAN CALLED OVE (Sweden/TBC/116 mins)
Directed by Hannes Holm. Starring Rolff Lassgard, Bahar Pars, Filip Berg, Ida Engvoll, Tobias Almborg.
THE PLOT: Ove (pronounced oo-vair) is an ill-tempered and cantankerous old man. A widower who has been ‘retired’ by his company of 43 years, he lives in a small gated community. He has a fearsome reputation though. He’s a busybody who strongly objects to anyone driving around the community – and anyone who doesn’t drive a Saab either. With his wife having passed away 6 months earlier, Ove feels it’s finally time to join her. His attempt at killing himself is interrupted by the arrival of chaotic new neighbours Parvaneh (Bahar Pars), her husband Patrick (Tobias Almborg) and their two young daughters. This kick-starts Ove’s journey back to life…
THE VERDICT: In Sweden, death seems to be a pre-occupation of their national cinema. Ingmar Bergman’s ‘The Seventh Seal’ is the most obvious example, but ‘A Man Called Ove’ is oddly life-affirming for its admittedly dark subject matter. Based on the best-selling book by Fredrik Backman, it focuses on Ove – Sweden’s answer to Victor Meldrew. How he got to be so tired of life and people’s foibles isn’t immediately apparent. He’s quite a character, not taking any nonsense and yet he has a role to play in his community.
Through some carefully placed (and paced) flashbacks by director Hannes Holm (who also adapted the book), we discover Ove’s story. The core of it is his relationship with his late wife Sonja (Ida Engvoll), the one person who really understood him. The young Ove is socially awkward, babbling on about car machinery on a first date – and yet Sonja identifies with him. Holm uses some current parallels with Ove’s initially frosty friendship with Parvaneh and her family. There’s a sense that there’s a good man in there, mixed up in the tantrums and acidic comments he throws out like confetti.
As the story develops, you get the sense that Ove may have given up on life, but life definitely hasn’t given up on him. Even amid a number of attempted suicide scenes, it becomes quite touching and life-affirming. Holm ensures a delicate balance between life and death in these scenes, which are darkly funny – enough to allow the audience to relax and chuckle at the weary ineptness of it all. Ove becomes so endearing as he gradually warms up and protects his neighbours that you don’t want him to die. Lassgard is superb here, cautiously keeping Ove the right side of likeable. We laugh with him rather than at him, which is the right way to play this very specific character.
It’s not hard to see why ‘A Man Called Ove’ scored two Oscar nominations earlier this year. It may ostensibly be about death, but the film is ultimately about life and all the messiness that comes with it. It’s a measure of the film’s high quality that it leaves you with both a teary eye and a smile. Go see.
RATING: 4 / 5
Review by Gareth O’Connor