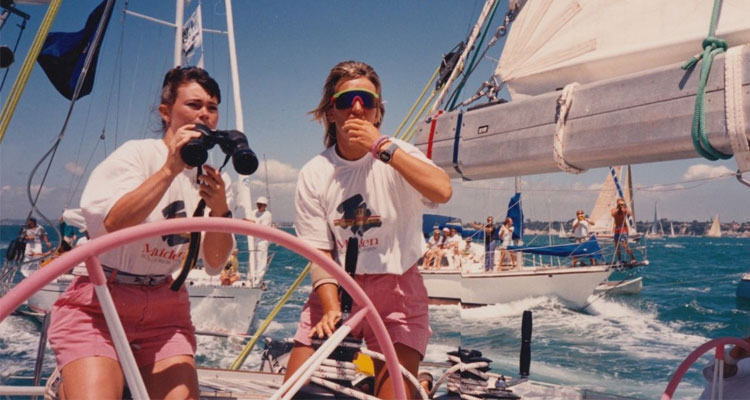 The Plot: Tracy Edwards never did things the easy way. She moved from an idyllic childhood in England to become a troubled teen. Running away from home, she found herself working as a cook on a charter boat. She found her purpose in life – to sail around the world in the competitive arena of the Whitbread Race. Before all that though, she had to face the choppy waters of sexism in the media and the male-dominated sailing industry – which would only relegate her to a lowly position on a competing yacht. With her foot in the door though, she put together an all-female crew on the Maiden to prove that women are just as capable and determined at winning the Whitbread Race as men…

The Verdict: Now here’s a truly inspiring documentary, which justifiably won the Audience Award at this year’s Dublin International Film Festival. It relates the gutsy determination of one Tracy Edwards to break the glass ceiling in the competitive sailing industry and prove a point that women are the equal of men. It’s a timely and relevant story, which took place just 30 years ago. However, from the barrage of criticism and dismissal from the media and her peers, you might be forgiven for thinking that it took place much further back in history. When Edwards assembled her female crew, one Guardian journalist labelled them ‘a tin full of tarts’. Oh boy. You couldn’t get away with something so derogatory and bare-faced like that now.

Alex Holmes structures his absorbing film as a series of uphill battles on and off the water. First with the competitive sailing industry, then the media and then the hunt for sponsorship. Or rather the lack of any sponsorship, since her endeavour was regarded as high risk and doomed to fail – simply because the Maiden was crewed by women. However, Edwards put together an experienced crew, while doubling as the skipper and navigator. While freely admitting that she can be a difficult person at times, resulting in personality clashes onboard, she kept her crew together and ensured a collective team spirit. They faced a gruelling race – 33,000 nautical miles over 6 stages and 9 months, through difficult waters and many physical and mental challenges along the way.

Holmes unfolds this remarkable story through a well-assembled collection of archival material and new interviews with the original crew (the Maiden is still sailing around the world to this day). Edwards had the foresight to bring a video camera onboard, so we get plenty of visceral footage of just how dangerous this race was. One mistake could be fatal for any crew member. As Edwards says at one point, the sea is always trying to kill you. It never lets up. Holmes’ pacing is excellent, building it up one stage at a time as the pressure grows on the Maiden crew to live up to the weight of their own expectations. It’s as tense and thrilling as a dramatic film, but with the heightened reality of being told through the voices of the talented young women who lived through it – one exhausting but fulfilling day after another.

Maiden is a rallying call for equality in sports from Edwards, but not in an aggressive way. It’s a subtle depiction of how women should not barred from competing simply because they’re women. More importantly though, it’s a universal story about believing in one’s dreams and fighting to protect them, no matter what others say. Otherwise, how would humans achieve anything, as one crew member states. It’s stirring and inspiring stuff, worthy of a wider audience. Go see.