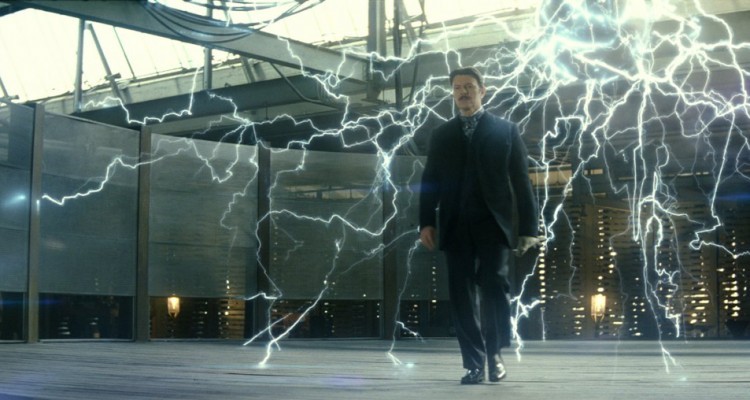 Cinemas Best Magic Scenes – From ‘The Prestige’ to ‘Spirited Away’

‘Now You See Me 2’ is released in Irish cinemas this week, and follows The Horsemen as they emerge from hiding after their massive stunt at the end of the first film, and try to do more good with their illusions this time out. The trouble is that tech billionaire Walter Mabry (Daniel Radcliffe) wants the talented tricksters to use their skills to steal for him and tries to force them to carry out his bidding. Of course The Horsemen have an ace up their sleeves.

With ‘Now You See Me 2’ opening in Irish cinemas this week, Movies.ie has taken a look back over some of the best uses of magic in the movies. Keep reading to find out more.

THE PRESTIGE
The year after he first brought a little magic to Gotham with ‘Batman Begins’, Christopher Nolan turned his eye to stage magic with ‘The Prestige’. Starring Hugh Jackman as aristocratic magician Robert Angier, ‘The Prestige’ follows a rivalry between two stage magicians to create the ultimate illusion at any cost.

As with many of Christopher Nolan’s films, ‘The Prestige’ is a tale of twists and turns, loyalty and betrayal, but it is also a cleverly constructed story with smart dialogue, strong performances and incredible pacing that allows the audience to think they have figured out the trick… But we never have. When the finale reveals the layers of treachery and danger that one of the magicians goes to in order to be the best, the result is not only startling but upsetting; a combination that Nolan does all too well.

STARDUST
Tristan Thorn (Charlie Cox) sees a star fall from the sky, and vows to retrieve it for the woman he loves. Little does Tristan realise that as well as the star being in human form, she is cross and impatient, and half of the kingdom is seeking her in order to gain her magic.

Neil Gaiman’s fantasy novel brought to the big screen by Matthew Vaughn is not only the tale of fallen stars, unrequited love and pirates; it is also a tale infused with magic. Not only the magic that the star Yvaine (Claire Danes) naturally possesses, but dark magic used for trickery and the magic that is true love. ‘Stardust’ is a film brimming with magic and adventure and truly is a modern fairytale brought to life.

HARRY POTTER AND THE PRISONER OF AZKABAN
Of all the eight films in the ‘Harry Potter’ franchise, ‘Harry Potter and the Prisoner of Azkaban’ stands out as one of the most well rounded and magical. Harry not only has to contend with classes, a new Defence Against the Dark Arts teacher who seems to know a lot about him, but notorious prisoner Sirius Black (Gary Oldman) has broken out of the wizard prison Azkaban with the intention of tracking Harry down.

‘Harry Potter and the Prisoner of Azkaban’, directed by Alfonso Cuarón is one of the darkest and most visually stunning films in the ‘Harry Potter’ franchise, but it is also one that is full of adventure, danger and clever uses of magic. As well as time travel, Harry has to contend with the dementors – guards of Azkaban, who come to Hogwarts searching for their escaped prisoner – and in order to defeat these dark, soulless creatures, Harry has to tap into a powerful vein of magic; hope. As well as this, the film also examines just how magical finding people who love and understand you can be.

THE WIZARD OF OZ
After a mysterious storm transports her from Kansas to the magical world of Oz, Dorothy (Judy Garland) has to find a way back home. Teaming up with a Scarecrow (Ray Bolger), a Tin Man (Jack Haley) and a Cowardly Lion (Bert Lahr), Dorothy begins her journey to the Emerald City to beg the help of the mysterious Wizard of Oz. The trouble is that on her arrival in Oz, Dorothy accidentally killed the Wicked Witch of the East and her sister, the Wicked Witch of the West, has sworn revenge.

Not only is ‘The Wizard of Oz’ cinematic magic, as it not only uses Technicolour, music and weird and wonderful characters in a way never seen before in the movies, it also uses magic in a charming manner; Dorothy manages to overcome all the challenges thrown at her by the Wicked Witch of the West because of the love she has for her friends, and of course, the way home was with her all along, in the form of the magical ruby slippers. As well as this, there are some more conventional uses of magic, such as the Good and Wicked Witches, the obviously bewitched flying monkeys and the fact that a tin man, scarecrow and lion can all walk, talk and sing with the best of them. ‘The Wizard of Oz’ blends every day and more fantastical magic together incredibly well, and it’s longevity can only be down to the spell it casts over audiences again and again.

SPIRITED AWAY
Magic is a theme that recurs throughout the films of Studio Ghibli, but there is perhaps none that use it so well as the 2001 film ‘Spirited Away’. The film follows 10 year old Chichiro (Daveigh Chase), whose family unknowingly wanders into a magical world when they take a wrong turn. Chichiro’s father insists on exploring this exciting new world, but it is not long before he learns that this magical land is not all that it is made out to be. After her greedy parents are turned into pigs, Chichiro is sent to work for the witch Yubaba (Suzanne Pleshette) and renamed Sen. In order to return back home, Sen must remember her real name and make friends with kind creatures in this strange and frightening land.

‘Spirited Away’ uses legend and myth to make up its story – such as names containing the ultimate magic – and combines this with themes similar to ‘The Wizard of Oz’, ‘Pinocchio’ and ‘Alice in Wonderland’ to make a tale about the power of love, as well as magical dumplings and flying dragons. ‘Spirited Away’ is a coming of age tale that makes subtle comment on Japanese society, and it is this careful mix that Studio Ghibli does so well.

Honourable mentions to ‘Fantasia’, ‘Hugo’ and ‘Magic in the Moonlight’

‘Now You See Me 2’ is released in Irish cinemas on July 4th 2016. Watch the trailer below…