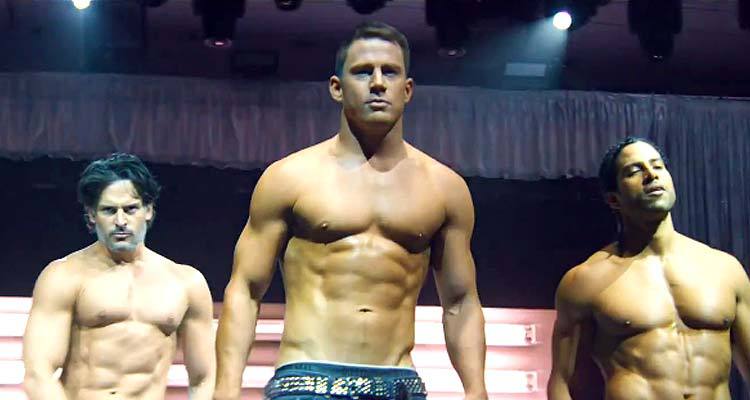 MAGIC MIKE XXL (USA//115mins)
Directed by Gregory Jacobs. Starring Channing Tatum, Joe Manganiello, Donald Glover, matt Bomer, Amber Heard, Jada Pinkett Smith,Elizabeth Banks, Alison Faulk, Vicky Vox.
THE PLOT: Three years after the events of MAGIC MIKE, Mike (Channing Tatum) has got out of the ‘male entertainment’ game, and is running his own furniture company. When his old strip crew roll through town, Mike seizes the opportunity to join them for ‘one last ride’ and to go out in a blaze of glory and dollar bills.
THE VERDICT: The trouble with the first MAGIC MIKE film was that while there was a drug running story in there, it was too thin on the ground for the film to be anything other than a dance film; the same almost goes for MAGIC MIKE XXL, which feels as though it is following the story arc of any number of street dance movies, but at least it is not trying to take itself too seriously, and instead gives the audience what it wants.
Channing Tatum is back as Mike, and the good news is that he can still bust a move. The same goes for Joe Manganiello as Big Dick Richie and Matt Bomer as Ken. The trouble is that some of the acting that happens in between the strip scenes is painful and awkward. Yes, strong acting is not what MAGIC MIKE fans are looking for, but a step up from the level of soap opera would be nice. The rest of the cast is made up of Jada Pinkett Smith – who obviously has a ball with her predatory character – Elizabeth Banks, Amber Heard, Adam Rodriguez, Donald Glover and Alison Faulk, with a special appearance by drag queen Vicky Vox. McConaughey and Pettyfer are out this time, and the presence of the former is sorely missed.
The screenplay, written by Reid Carolin, is basically a road movie with strippers, which is completely fine, but some of the dialogue is cringe worthy, and we never get to really learn about the characters on screen, even though the film is 115 minutes long. This means that the film drags its heels often, with the gaps between the dances often too long and too boring. As well as this, the gang are headed to a Stripper Convention, not a competition, so the audience is never truly given a reason to root for these ripped ‘underdogs’. That said, MAGIC MIKE XXL never tries to be anything that its not; it seems to have learned the lessons from the first film and cuts out any unnecessary story to make the film one about male strippers on the road.
Director Gregory Jacobs seems to have no interest in rounding out these characters, and focuses too much on the dance/strip sequences, which become cringey and repetitive. As cinematographer and editor, Steven Soderberg seems to have lost the touch of magic from his previous work, with some truly odd camera angles, and filler scenes left in that drag the pacing of the film down to a crawl.
In all, MAGIC MIKE XXL is a road movie about male strippers. The strip sequences are well choreographed, but much of the dialogue is cheesy and badly acted, and without a reason to root for Mike and his band of ripped cohorts, MAGIC MIKE XXL is simply too long, and has little resolution. Fans of the first film will love it though, and the film definitely knows its audience.
RATING: 2.5/5
Review by Brogen Hayes