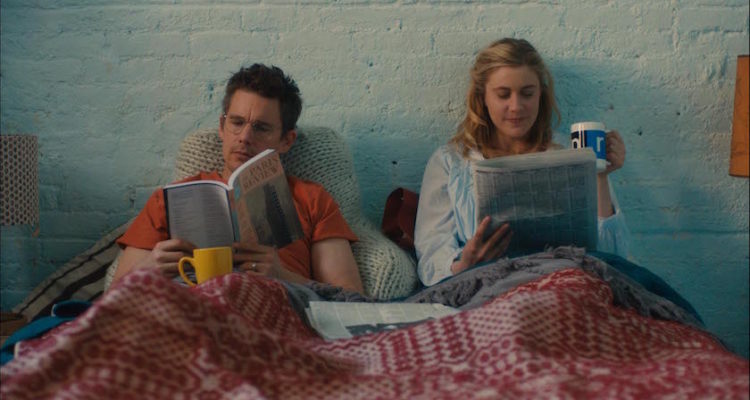 MAGGIE’S PLAN (USA/15A/95mins)
Directed by Rebecca Miller. Starring Greta Gerwig, Ethan Hawke, Julianne Moore, Bill Hader, Maya Rudolph.
THE PLOT: Maggie (Greta Gerwig) is determined to become a mother; she feels she is at the right time in her life, even though she has yet to have a meaningful relationship that lasts more than a few months. Maggie plans to inseminate herself with sperm from an acquaintance, but as the date draws near, she becomes friends with fellow teacher and aspiring novelist John (Ethan Hawke), a friendship that turns to something more, destroying John’s marriage to the passionate but self-involved Gerogette (Julianne Moore).
THE VERDICT: The entire plot of ‘Maggie’s Plan’ could be easily dismissed as a film that focuses on truly first world problems, but to do this would be to do the film a disservice. ‘Maggie’s Plan’ looks at the nature of relationships and motherhood in a time when connections are seemingly harder and harder to make.
Greta Gerwig is on fine form as the remarkably unpretentious, but rather controlling Maggie; her performance is light and airy and, like many of us, she gets herself into situations without knowing how to get out of them, and not quite sure how she got there in the first place. Ethan Hawke plays the self-absorbed and perpetually unhappy John, whose marriage is not all that it is cracked up to be and he is sure that he is the gardener to his wife’s more successful career. Julianne Moore brings some levity as the utterly controlling and volatile Georgette, and the central trio are backed up by Bill Hader and Maya Rudolph in smaller roles.
The screenplay, written by Rebecca Miller and Karen Rinaldi feels as though it is heavily inspired by early Woody Allen films, and this is not a bad thing. There is an element of self-involved neuroses to all of the characters, but many of them have a warmth lingering under the surface; a warmth that causes the audience to root for these strange, dysfunctional people. The idea of motherhood is one that challenges many young women today, and it is carefully examined in this almost farcical tale of what to do when you have got your cake and you realise you don’t want it. The dialogue is whip smart and the change of loyalties throughout the film is a joy to behold.
As director, Rebecca Miller makes this subtle, gentle comedy one that asks plenty of questions and answers them as well. The performances from the entire cast are engaging and strong, as well as being relatable and, since many of the characters are completely unaware of their own shortcomings, rather funny. The film is well paced for the first act, but wobbles slightly as a three-year gap struggles to be bridged, but the fallout and absurdity that follows manages to pull the film back into its stride. The wit and humour of the film works well, as does the implication that the entire situation is more than a little ridiculous.
In all, ‘Maggie’s Plan’ is a well written, well acted and well directed look at the actions of self absorbed people to make their lives as close to perfect as possible. The humour is subtle but works well, and although the pacing wobbles from time to time, Hawke, Gerwig and Moore have rarely been better.
RATING: 4/5
Review by Brogen Hayes