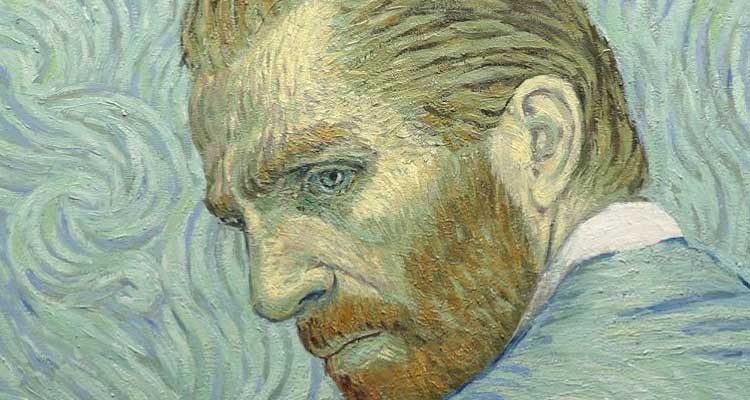 LOVING VINCENT (UK / Poland, 12A, 94 mins)
Directed by Hugh Welchman, Dorota Kobiela. Starring Douglas Booth, Saoirse Ronan, Chris O’Dowd, Aidan Turner, Jerome Flynn.
THE PLOT: France, 1891. Armand (Douglas Booth) is a young man whose father Joseph (Chris O’Dowd) was a close friend of the late, great artist Vincent Van Gogh. A letter from Vincent to his brother Theo has come to light, written close to Vincent’s death from an apparently self-inflicted gunshot wound. Joseph tasks him to find Theo and deliver the letter, to give some sort of closure. However, the task is more challenging than appears. Theo has died in the last few months. Instead, Armand interviews a number of people including Doctor Gachet (Jerome Flynn) and his daughter Marguerite (Saoirse Ronan) who were near Vincent in his last days, painting out in the fields. The mystery deepens…
THE VERDICT: ‘Loving Vincent’ is a true cinematic experience, which makes it all the more a must-see film. Seven years in the making, part of it is down to the filmmaking style. It’s best described as a greatest hits package of Van Gogh’s paintings – in animated motion picture format. The film was shot in live action on basic sets against greenscreen. Then a group of 125 talented artists spent 2 years painting over the 12-frames per second to create a film that is in the visual style of Van Gogh himself. It’s similar in style to Richard Linklater’s rotoscoped efforts, Waking Life and A Scanner Darkly, but entirely original in that it’s the world’s first fully oil-painted film.
Shooting in the boxy academy ratio to fit the ratio of Van Gogh’s paintings, husband and wife co-directors Hugh Welchman and Dorota Kobiela whisk the audience away into the world of Van Gogh, with the animation taking on a shimmering life of its own. The visuals literally jumps off the screen – no 3D required. You can even see dabs of paint changing from frame to frame, second to second. There’s a remarkable level of detail in both the painting and animation. Yet, the continuity between all the artists is seamless and fluid, so it becomes a continuously moving painting. In more ways than one.
The visual experience of the film wouldn’t work unless it was anchored to an evolving, involving plot. Perhaps taking Citizen Kane as a template and using interviews and records from the time, Welchman and Kobiela structure their story as a mystery, with Van Gogh framed through the various people who knew him. Each of them have their own particular take on him – why he killed himself, did he really commit suicide, was someone else involved, was his Lust For Life too much for him to bear? The film becomes quite moving in this sense, painting a portrait of a tortured artist who while in the midst of despair also sent out some hopeful, optimistic letters to his family and friends. There was more of life than of death about him.
‘Loving Vincent’ is a true original – a unique tribute to the life and work of Van Gogh. It dazzles the eyes while engaging the brain, giving food for thought and admiration at the painstaking filmmaking required to bring it to life in all its artistic glory.
Rating: 4 / 5
Review by Gareth O’Connor