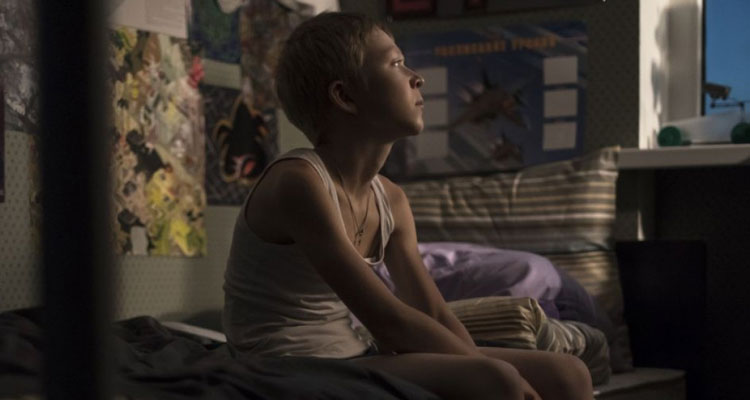 LOVELESS (Russia / 16 / 127 mins)
Directed by Andrey Zvyagintsev. Starring Maryana Spivak, Aleksey Rozin, Aleksey Fateev.
THE PLOT: Moscow-based couple Zhenya (Maryana Spivak) and Boris (Aleksey Rosin) are separated and have decided to move on with their lives, now involved with new partners. They’re selling their apartment and are blissfully unaware that their 12-year-old son knows everything that’s going on, including their bitter arguments. Zhenya never wanted a kid and Boris is distracted by his needy, now pregnant partner. They barely even notice when their son disappears one day. Suddenly, they start to care. With the help of missing people volunteer Ivan (Aleksey Fateev), they attempt to find out where their son is and what happened to him…
THE VERDICT: Andrey Zvyagintsev has been steadily building up a reputation as one of Russia’s foremost and fearless directors. Having directly tackled the Russian Government in his previous film ‘Leviathan’, he now tackles the implosion of a nuclear family in the Oscar-nominated ‘Loveless’. There’s even a political subtext. Russia has been in the news recently, with Vladimir Putin keeping his iron grip on power and even ‘The Death of Stalin’ being banned in the country. It’s all there in the tagline on the poster – ‘A missing child. A ruined marriage. A country in crisis’.
However, the filmmakers have stressed that the film is primarily about the selfishness of human behaviour. It’s a universal theme that could apply to any country, not just Mother Russia. Zhenya and Boris are undoubtedly self-centred and unwilling to take on the parenting role that they find themselves in. This makes for chilly viewing at times, best illustrated by Boris dumping his newborn child into a playpen as if it was a dog. One almost wants to scream at these characters to wake up and pay attention to their crying son next door.
The missing child investigation that follows is protracted, but in a good way. It allows Zvyagintsev to sketch the parents in greater detail, as Zhenya comes into conflict with her estranged mother and which speaks volumes about Zhenya. The fact that they have to go to a volunteer group to conduct a more detailed, on-the-ground search is a sly criticism of the lack of State resources – as a police officer tells them. The film was inspired by one such volunteer group. It’s quite a riveting drama, as one road leads to another… and an excellent, slow-reveal closing shot which drops further hints.
Zvyagintsev is an observant director of actors, coaxing strong, multi-layered performances from his leads which never settle into obvious villain / hero roles. They’re just deeply flawed characters, all too human in their life choices and regrets. As a drama about familial conflict framed through the disappearance of a child, it works very well. There’s an austere quality to it, which is typically Russian and very much of the director’s viewpoint on modern life in his country. The political subtext is there if one wants to read more into its state-of-the-nation approach. However, there’s so much to recommend about this well-directed, award-winning film that it will haunt you for days afterwards.
RATING: 4 / 5
Review by Gareth O’Connor