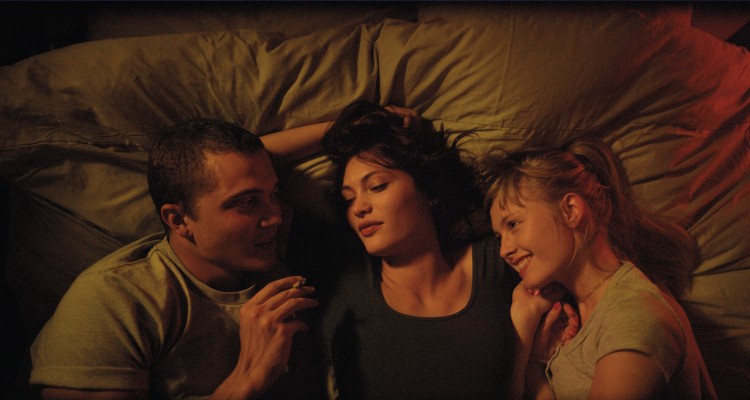 LOVE (France/Belgium/IFI/135mins)
Directed by Gaspar Noe. Starring Karl Glusman Aomi Muyock, Klara Kristin, Vincent Maravel, Ugo Fox, Juan Saavedra, Benoit Debie, Stella Rocha.
THE PLOT: A young American in Paris, Murphy (Glusman) reckons his glorious rumpy-pumpy with the sexually-charged Electra (Muyock) could only get better if they invite their pretty neighbour, Omi (Kristin), into their bed. Only, it doesn’t quite work out that way. Murphy wants to make “sentimental sex films”, and he soon has plenty of material for the sex part (about half of this film is rumpy-pumpy, with gatherings of every kind and size), but it’s almost impossible to imagine such a cock-sure, would-be enfant terrible being capable of anything approaching a true sentiment…
THE VERDICT: Banned in Russia beause of its explicit sexual content, just as, most recently, with Lars von Trier’s ‘Nymphomaniac’, the latest cinematic mindfuck from the director of ‘Irreversible’ and ‘Enter The Void’ doesn’t quite live up to its red light window display. At times utterly seductive and at others closer to a molestation, Gaspar Noe’s would-be hard-hitting love story is hard to love.
In truth, closer to ‘The Dreamers’ and ‘9 Songs’ than ‘Last Tango In Paris’ or ‘In The Realm Of The Senses’, whatever about the thin red line between erotica and porn that arthouse has long used as a skipping rope, there’s no denying the oul’ love triangle at the centre of Noe’s latest is traditional in the extreme. A spurned lover taking on another but never quite getting over Kid A has been part of cinema’s language ever since trains starting pulling into theatres, and despite Noe’s trademark tricks – the Burroughs editing, the august Haneke harshness – there’s little new here to get, well, hard about.
Oh, and this is in 3D too. So, that’s another reason not to really bother with the bugger.
RATING: 2/5
Review by Paul Byrne