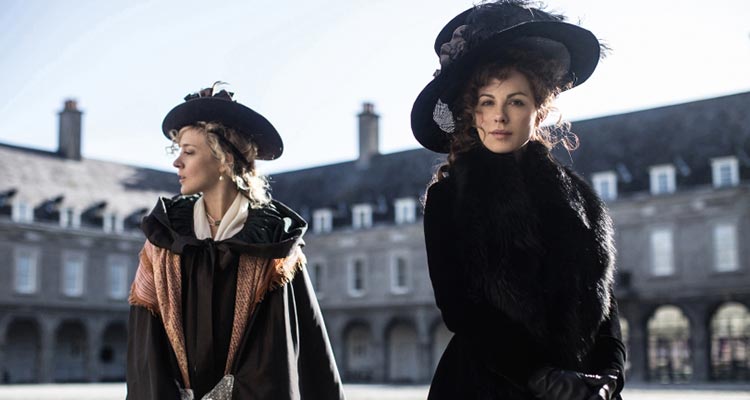 LOVE & FRIENDSHIP (Ireland/Netherlands/France/USA/G/93mins)
Directed by Whit Stillman. Starring Kate Beckinsale, Chloe Sevigny, Tom Bennett, James Fleet, Morfydd Clark, Emma Greenwell, Jenn Murray, Lochlann O’Mearáin, Sophie Radermacher, Stephen Fry, Ross MacMahon, Justin Edwards.
THE PLOT: Life for the single high society girl in 1790s London is a tough one, but widowed temptress Lady Susan (Beckinsale) has a distinct advantage – namely, a fine body and a complete lack of scruples or decency. It’s evident in her long-suffering daughter, Frederica (Clark), kicked out of boarding school for both running away once too often and because her mother refuses to pay the school fees. Forcing herself upon the happy home of her late husband’s brother, Charles Vernon (Edwards), Lady Susan is soon giving the latter’s impressionable young brother-in-law, Reginald DeCourcy (Fleet), a bloodrush or two – much to the distress of his sister, Catherine (Greenwell), the lady of the house. Helping Lady Susan in her cunning plans to marry into money is her old friend Alicia Johnson (Sevigny), even if the latter’s older husband (Fry) insists that his wife never mix with this terrible influence. With the bumbling Sir James Martin (Bennett) presenting himself as a suitor for a horrified Frederica, Lady Susan knows she’s got her work cut out for her if she is to secure herself a comfortable future…
THE VERDICT: Despite the fact that Whit Stillman is a very, very, very nice man, and is clearly intelligent, witty and insightful, it’s always bothersome that the man’s films were never walked the walk the walk. The ideas were great, the scripts often packed some sweet zingers and chucklesome home truths, but, from those early outings, ‘Metropolitan’ (1990) and ‘Barcelona’ (1994) to the recent back-door mumblecore comeback ‘Damsels In Distress’ (2011), Whit Stillman’s movies always felt stilted and stiff. Like Hal Hartley in a Penneys beret. Or a student Woody Allen in a cravat.
Suffice to say, expectations for ‘Love & Friendship’ were low. Here was Stillman, barely back out of the woods (‘Damsels’ didn’t quite reach the parts, critically or commercially), shooting a sunny period piece in rainy Ireland, with his old ‘Last Days Of Disco’ duo, Kate Beckinsale and Chloe Sevigny. The former had come and gone as a box-office also-ran, and Sevigny is still working her way through the growing pains of being a former indie teen queen. Which can’t be easy for Chloe, given that she seems to be slowly morphing into Marty Feldman.
So, you can imagine the surprise when this adaptation of a lesser-known Jane Austen novella by a lesser-loved New York filmmaker with two recovering career actresses turned out to be a hoot. Beckinsale is perfectly cast as the “manipulative, beautiful and fascinating” (as Whitman puts it) Lady Susan, cunning and conniving in the extreme when it gets to bagging herself a rich husband and a strong lover. Even if that’s a two-man job.
Pretty much stealing the show though is English comic actor Tom Bennett, known here for TV’s quite funny ‘PhoneShop’ and the Chris O’Dowd dud Family Tree. Playing the gloriously gormless Sir James Martin as a cross between Hugh Laurie’s Prince Regent in ‘Blackadder The Third’ and Darren Boyd’s Horatio in Jesse Armstrong and Sam Bain’s ‘Ladies And Gentlemen’ (2007), Bennett hits Sellers-esque heights of brilliant buffoonery.
There’s still that smell of student film shortcomings – you can tell a lot about a filmmaker by how natural the extras look – but all of that fades away as the wickedness and the wry humour kicks in…
RATING: 4/5
Review by Paul Byrne