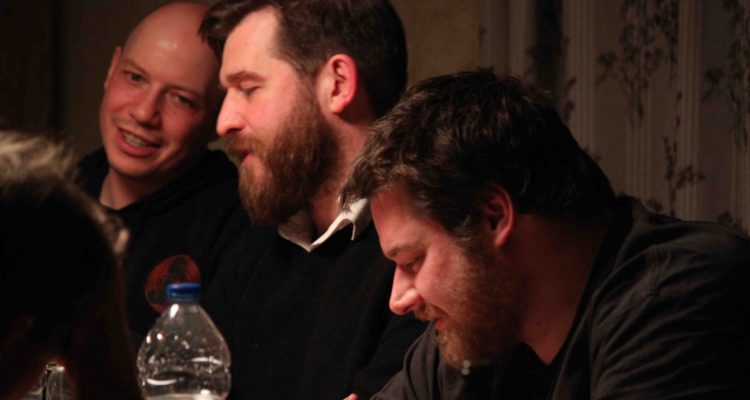 With his Lost In France documentary capturing the state of independent music today, director NIALL McCANN talks to Paul Byrne about teenage kicks, lost weekends and the future of rock’n’roll. All the trivial stuff…

As much an emotional reunion tour for Scottish labelmates such as Mogwai, RM Huppert and Alex Kapranos from Franz Ferdinand as an examination of the independent music industry today, Niall McCann’s Lost In France is both heartwarming and heartbreaking.
Heartwarming in that any reunion by middle-aged protragonists revisiting their teenage wildlife years will throw up all kinds of perspectives, man. Maybe too much fuckin’ perspective, to quote the great David St Hubbins, as the band members piece together their lost weekend in the small French village of Mauron, in Brittany. Heartbreaking in that, hey, all things must pass, and certainly the glory days of the young independent label being able to rely on record sales to survive and maybe even thrive would appear to be long gone.
The independent label here is the Glasgow-based Chemikal Underground, formed in 1994 by The Delgados, initially to release their own records, and soon the darling of John Peel, NME and all the other hipper arbitrators of the new breed. Back then, the label thought nothing of throwing together an American tour for one of their upcoming bands. Today, says shaggy label boss Stewart Henderson, it’s been eight years since he put a band on a plane to anywhere.
This magical mystery tour sees the band members “definitely older, possibly wiser”, and very much ready to laugh and marvel at their younger, wilder, hungrier selves. Old VHS footage of that shambolic 1996 tour sparks all kinds of chuckles and insights, igniting reflections by the various band members on where it all went right, and where it all went wrong.
Throughout this inspiring documentary, that manic pop thrill that soundtracks every good life hits home. It’s enough to make you go out and buy a whole new bunch of albums. Which, of course, I did.
Catching up with Niall outside the Light House cinema, it was clear it was that simple manic pop thrill that inspired his trip with Chemikal Underground. And it is a trip. Find out for yourself when Lost In France tours Ireland this coming weekend, hitting The Workman’s Club on Friday, March 3rd, Connolly’s Of Leap, Cork on Saturday, March 4th and Roisin Dubh, Galway on Sunday, March 5th. Special guests Stuart Braithwaite (Mogwai), Emma Pollock (ex-The Delgados), RM Hubbert and young McCann himself will be in attendance.

LOST IN FRANCE is now showing!