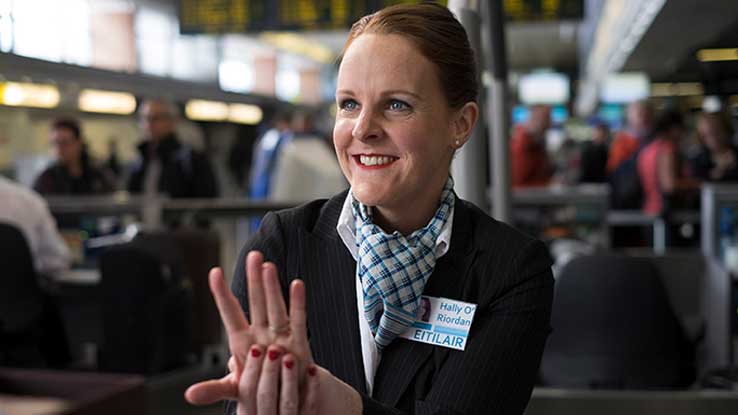 Opening in Irish cinemas on July 13th, LOST & FOUND is new movie with 7 interconnecting stories set in and around a lost & found office of an Irish train station. All segments are inspired by true stories, share a theme of something lost or found and characters that come in and out of each other’s lives. Here director Liam O’Mochain takes us behind the scenes on this quirky project.

How did you first come up with the idea for Lost & Found?

I had worked on a feature film in 2007 called WC which was set predominantly in one place – the toilets of a late-night jazz bar and I really liked the idea of being somewhat confined and having to come up with stories, ideas and sub-locations to keep the viewers’ attention.  After I made WC I wanted to get a break from features for a bit so I made a short film called Covet where we spent two days filming in a cottage in Co. Laois.  It was such a great experience trying to create something in such a short time and short form and I loved the area in Co. Laois and decided that I wanted to go back and do something else there at some point.  Laois is less than an hour from Dublin but you get a great mix of both urban and rural.  I have also loved trains from a very young age and wanted to do something in and around trains.  Over the years’ I had seen numerous anthology films ‘Shorts Cuts’, ‘Paris je t’aime’, ‘7 days in Havana’ and ‘Tickets’ which was set on a real train, but no anthology film or portmanteau films had been made in Ireland.  So, I decided to combine all those elements and put a collection of real stories set in and around a train station in a rural and urban setting.  I also wanted to explore the idea of a lost & found office and what kind of things people leave behind on trains and in train station!

Did you always intend it to be 7 stories or did that develop with the project?

I started out with 10 stories and I ended up using 5 of those and developed 2 more during the five year filming and production process.  I had a graph of all the stories and characters which I kept moving around to fit into the film’s narrative.  I would also email, text and leave notes for myself everywhere, a bit like the guy in the film Memento!

Each of the segments are inspired by true stories, can you tell us more about that?

When writing the script, was it difficult to link all stories together?

Yes and no.  I combined elements of different stories.  I would take a character who was a maybe a lead in one story and put him or her into another story in a smaller role.  I gave the characters other situations or backgrounds that we may not know about ordinarily which gives us a sense of knowing these characters better and makes the audience try and make links themselves or make up their own stories about what happens next.

What type of research did you do on each story?

I had very little to do with the stories that happened to me or incidents that I witnessed, other than making them fit into a story.  For example, the character of Eddie the beggar in the train station was inspired by a man I met with a large suitcase in the main bus station in Marrakesh who seemed to be living there.  He said he was waiting for a bus to go to the airport to visit his sister in London and was telling everyone his story or a variation of it.  I wondered what his real story might be and it got me thinking.  I decided to adapt and adjust this experience and set it in a train station.  Other stories that came from friends – I just grilled them for every juicy bit, like the girl who decided to get married even though she didn’t have a groom.  I watched a lot of Don’t Tell the Bride, First Dates and many other wedding-type programmes for ideas.  I also did a lot of research on the beginning of the 2nd World War and children that were transported to the UK & Ireland on the kinder-transport for the story that is set in Poland and Ireland.  When you are writing you never know where inspiration or ideas or even dialogue for that matter will come from.

What was the most unusual story you heard when researching the film?

The girl who booked a church and wedding venue without having a groom.  She gave herself 2 years to meet someone and to be proposed too.  You will have to see the film to know what happened!

Have you ever had an encounter with a Lost & Found office yourself?

Many times.  In Italy, my backpack was heavy so I left it on a seat in the train station while I went to get a coffee.  I was only gone a few minutes, but it was gone when I came back as someone dropped it into the L&F office – today they probably would call the police or bomb squad!  I was at the Cannes Film Festival many years ago and I lost my bag at one of the parties.  I had my reading glasses, diary and other stuff in it.  Someone found it, read my diary, found my address in it and sent back the glasses to me.  I never saw the diary again or the bag.  My deepest inner most thoughts, well more scribbles really…

Tell us about the casting, what were you looking for?

I either cast the segments one by one or two of them together depending on the production schedule.  On this project as I was doing it bit by bit so I cast as I went along, mostly people I knew and actors that I felt could bring something to the part rather than open casting.  I ended up with a brilliant cast – Norma Sheahan (Moone Boy), Liam Carney (Red Rock), Mary McEvoy (Republic of Telly, Glenroe), Brendan Conroy (Vikings), Aoibhin Garrihy (The Fall), Sean Flanagan (Foil Arms & Hog), Olga Wehrly (The Clinic), Seamus Hughes (Jimmy’s Hall), Anthony Morris (Game of Thrones), Annette Flynn (Hollyoaks) , Donncha Crowley (Fr Ted), Lynette Callaghan (Cold Feet), Barbara Adair (Derry Girls) and many more.

Was it challenging to film each segment separately?

It was great filming in segments as I could take time away and think about the next one.  The most worrying part was how to get enough money to fund the next part and would the stories all fit together in one cohesive narrative.  Also, whether the crew and cast would come back over the years, which thankfully everyone did.

You spent many years working on the film, how much did it evolve over that process?

As I said earlier I started with 10 stories and used 5 of those in the film and added 2 more as it developed as a film.  I did work on the characters a lot, to see who could fit in to another stories.  It was lot of fun.  I felt like I was creating my own world.

We filmed each story in a different location or locations such as in train station, on a train, in a pub, funeral home, Dublin airport, houses & fields, botanic gardens and the streets of Dublin.  Every location has its own challenges.  The train station and live train was challenging but exhilarating at the same time.  We promised to keep out of peoples way and had our own insurance.  I got in touch with Irish Rail early on, they had helped me previously nearly 20 years ago on my first feature film The Book That Wrote Itself which had a train scene in the film.  Irish Rail were great, we just had to tell them what we wanted and how we were going to do it.  I had talked with Siobhan in DAA months in advance of the shoot and with her help I was able to come up with lots of different locations in the airport that would fit the story.  If you are honest with people about what you want to do, most people will let you film.

The film won ‘Best Foreign Film’ at its first international film, how was that?

The Arizona Film Festival is a great film festival.  I have been going to the festival for many years so it was nice to get an award from the festival.  It reminds me a lot of the Galway Film Fleadh, where they have complete focus on films and the filmmakers.  The award has helped a lot to get press attention and distributors interested in the project internationally.

What’s next for you?

A con movie.  I love the Steve Martin, Michael Caine and the late great Glenne Headly film Dirty Rotten Scoundrels.  I have written a film that is along the vein of that film but set in the west of Ireland.