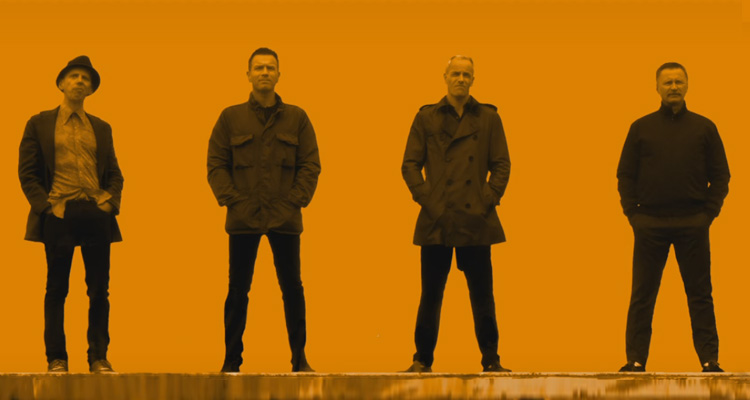 This weekend, ‘T2 Trainspotting’ is released in Irish cinemas. Set 20 years after the events of the first film, ‘T2 Trainspotting’ sees Renton (Ewan McGregor) return to Scotland to make amends with his friends, after screwing them over in the first film. While Spud (Ewen Bremner) and Sick Boy (Jonny Lee Miller) may be open to conversation, Begbie (Robert Carlyle), who has just got out of prison, is likely to be less forgiving.

To celebrate the release of ‘T2 Trainspotting’ 21 years after the first film, Movies.ie has taken a look back at some of the most long awaited sequels… After the 63 years between ‘Bambi’ and ‘Bambi II’ and the 59 years between ‘Fantasia’ and ‘Fantasia 2000’.

MAD MAX FURY ROAD – 29 years
Director George Miller waited 29 years after ‘Mad Max Beyond Thunderdome’ to make the thrilling and incredibly well received ‘Mad Max Fury Road’. The film follows Max (Tom Hardy) in a world where oil and water are now the most precious commodities on earth. Imparator Furiosa (Charlize Theron) decides to liberate Immortan Joe (Hugh Keays-Byrne)’s favourite wives from his oppressive regime and take them to a promised land of plenty. Joe, however, has different ideas and rallies the War Boys to take Furiosa down before they can truly escape. Of course, Joe doesn’t know that Furiosa has Max on her team.
After years in so-called development hell, ‘Mad Max Fury Road’ not only received a standing ovation at the Cannes Film Festival in 2015, but is also ranked as one of the best action movies ever made on Rotten Tomatoes.

THE SPONGEBOB MOVIE: SPONGE OUT OF WATER – 10 years
Based on the Nikelodeon TV series, ‘The SpongeBob SquarePants Movie’ was released in Ireland in 2005, and although it was a box office success, producer Julia Pistor said that it was unlikely there would be a sequel to the film. Of course, things changed over the years, and ‘The Spongebob Movie: Sponge Out of Water’ was released in 2015. The film follows our heroes on a brand new adventure after the secret formula for the Krabby Patty is stolen. What SpongeBob doesn’t know, however, is that the dread pirate Burger Beard (Antonio Banderas) is behind the theft, and to reclaim the formula, the gang will have to go where they have rarely gone before; dry land.
‘The Spongebob Movie: Sponge Out of Water’ was just as goofy, fun and over the top as the first film, but was even more well received than the one that went before – with a rating of 80% on Rotten Tomatoes – and the good news is that a third film is on the way, due for release in 2019. Aye Aye Captain!

FINDING DORY – 13 years
13 years after Marlin (Albert Brooks) and Dory (Ellen DeGeneres) teamed up to find the missing Nemo (Alexander Gould) in the vast expanse of the ocean, the team at Pixar returned to the world under the waves to tell audiences just what happened to Dory’s family, the one that the forgetful fish only remembers occasionally. Their adventure takes them across the seas with some old friends, and into a world that is safe and scary at the same time.
‘Finding Dory’ introduced a host of new characters to audiences, including seven tentacled octopus Hank (Ed O’Neill), nearsighted whale shark Destiny (Kaitlin Olson) and Fluke (Idris Elba) the sea lion, as well as the adorable baby Dory (Sloane Murray). The story is a fantastic new adventure from the Pixar team, and went on to charm audiences around the world.

STAR WARS: EPISODE VII – THE FORCE AWAKENS – 10 years
There are two schools of thought on how long it took ‘Star Wars: The Force Awakens’ to get to our screens and continue the story of the evil Galactic Empire. Although it was only 10 years between ‘Star Wars: Episode III – Revenge of the Sith’ and ‘The Force Awakens’, it was actually 32 years between ‘Star Wars: Episode VI – Return of the Jedi’ and the film that continued the story of Han Solo, Luke and General Leia.
A new evil force in the form of The First Order threatens the peace of the galaxy and although the resistance led by General Leia (Carrie Fisher) search, they cannot find Luke Skywalker (Mark Hamill), who has vanished. When she hears of an old ally finding a clue to Skywalker’s whereabouts, Leia sends one of her best pilots, Poe Dameron (Oscar Isaac) to retrieve the information. It’s not long before Kylo Ren (Adam Driver) and The First Order arrive to also retrieve the information, and when Dameron is captured, it is up to his droid BB8 to keep the vital information safe, and get it back to the resistance.
‘Star Wars: Episode VII – The Force Awakens’ not only delighted fans across the globe, but revitalised the ‘Star Wars’ franchise, set up a new trilogy and introduced some wonderful new characters, including Kylo Ren (Adam Driver), Poe Dameron (Oscar Isaac), Rey (Daisy Ridley), Finn (John Boyega) and the adorable droid BB8.

CLERKS 2 – 11 years
Over a decade after Dante (Brian O’Halloran) had a bad day at work, he and his buddy Randal have moved on from the Quick Stop to the fast food empire of Mooby’s… And are about to have another remarkable day at work. Over the course of the day, Dante dances on the roof of the restaurant, tells his crush he loves her and discovers he is going to be a father. Randal annoys almost everyone he meets – as per usual – sets off a fight with a ‘Lord of the Rings’ fan, and argues with several customers over whether an outdated phrase is actually a racial slur. Jay (Jason Mewes) and Silent Bob (Kevin Smith) also return, and loiter outside Mooby’s the way they once did outside the Quick Stop.
Originally slated to have the title ‘Clerks 2: Hardly Clerkin’’ – as an homage to Jerry Lewis’ 1979 film ‘Hardly Workin’’ – which was then changed to ‘The Passion of the Clerks’, after Mel Gibson’s ‘The Passion of the Christ’, but was ultimately changed to ‘Clerks II’ to ward off negative reactions to the title. ‘Clerks II’ carries on the same style of dialogue heavy, puerile humour that made the first film a hit, and shines a light on the tragedy of low paid workers who dream of something more, but never manage to achieve it.

‘T2 Trainspotting’ is released in Irish cinemas on January 27th 2017. Watch the trailer below…