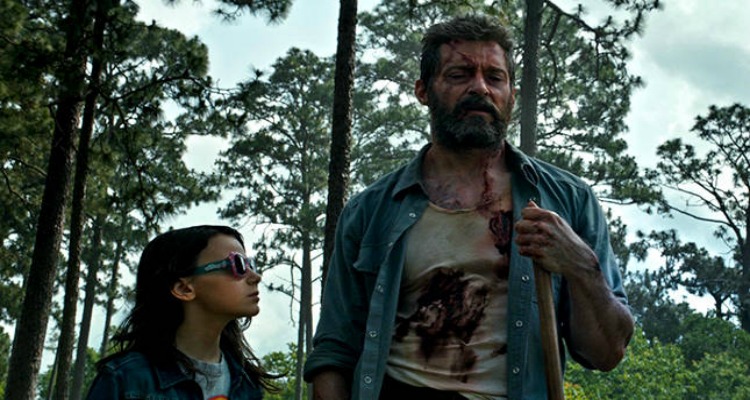 LOGAN (USA/16/137mins)
Directed by James Mangold. Starring Hugh Jackman, Patrick Stewart, Dafne keen, Stephan Merchant, Boyd Holbrook
THE PLOT: In 2029, no new mutants have been born for over 20 years, and Logan (Hugh Jackman) – once known as Wolverine – is working as a limo driver and trying to keep the ailing Charles Xavier (Patrick Stewart) away from prying eyes. All is going well until a woman appears begging for Logan’s help, and Charles announces that a new mutant has been born, and he is communicating with her.
THE VERDICT: The final instalment in the Wolverine trilogy is undoubtedly the best film to focus on the titular mutant, and may well be the best X-Men film we have had to date, Gone is the glossy comic book feel of other outings, replaced by a dark, gritty and gloomy feel. This, combined with the amount of violent set pieces, blood shed and heads rolling, mean that ‘Logan’ is an entirely different beast to ‘X-Men Origins: Wolverine’, or for that matter, ‘The Wolverine’.
Hugh Jackman returns for maybe the last time (or maybe not) as Logan/Wolverine, and brings a new depth to the character. Previously, Logan just seemed grumpy and petulant, but since he is ageing and his powers are deserting him, it seems that Logan truly has something to be annoyed about, and a reason to truly lay low. Patrick Stewart returns as Charles Xavier – also possibly maybe for the last time – and has a great time showing a man restricted by the thing that previously made him great. The two have great chemistry on screen, and they are a joy to watch together, Stephen Merchant takes over the role of Caliban from Tómas Lemarquis , who played the role in ‘X-Men: Apocalypse’. Although merchant does have some comedic lines, his role is mainly dramatic, and he does well at creating a character that begrudges his lot but is fiercely loyal. Dafne Keen plays the fierce and fearless Laura, the mutant who kicks off all the trouble, and she makes the character as feisty as you could hope, and has some great tender moments with Hugh Jackman as Logan. The rest of the cast features Richard E. Grant, Eriq La Salle, Elise Beal, Quincy Fouse and Elizabeth Rodriguez.
Scott Frank, James Mangold and Michael Green’s screenplay takes everything that Wolverine should have been in the past, and brings it to the fore in ‘Logan’. There are the prerequisite set pieces that pepper the film, but this is really a story about fathers and children, with Charles Xavier stepping into the father role for Logan. There are some fun pieces of dialogue and revealing moments, but there are also times when the film seems to struggle under the weight of its own ambition, and runs out of steam. There is the distinct feel of a Western about ‘Logan’, and the character certainly fits the bill of the nomadic fighter, while the entire film is soaked with revenge and retribution.
As director James Mangold – who has been quiet since his ill-fated 2013 film The Wolverine – seems to have learned from the mistakes of his and Wolverine’s last big screen outing, and makes ‘Logan’ the film that we have all been waiting for in the X-Men universe. There are times when the pacing wobbles, but the comedic and dramatic timing is top notch, the performances strong and the feel of this being an ending percolates through the entire film.
In all, ‘Logan’ is perhaps the best ‘X-Men’ movie to date, and certainly the best solo outing for Wolverine that we have seen to date. The cast do incredibly well, the rapport between Stewart and Jackman is second to none and the story creates a new dimension in familiar characters that keeps the audience on their toes. There are times when the pacing struggles and the film certainly feels overly long, but ‘Logan’ is still a great film, and a fantastic ‘X-Men’ film too.
RATING: 4/5
Review by Brogen Hayes