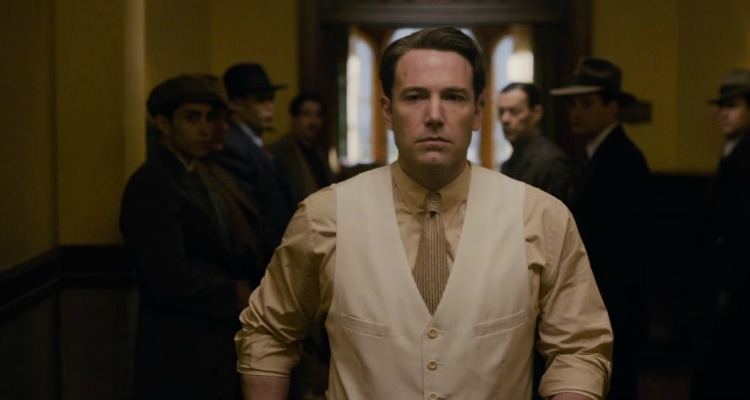 LIVE BY NIGHT (USA/15A/128mins)
Directed by Ben Affleck. Starring Ben Affleck, Sienna Miller, Zoe Saldana, Brendan Gleeson, Chris Cooper
THE PLOT: After fighting the Huns in France, Joe Coughlin (Ben Affleck) returns to Prohibition-Era Boston, swearing never to follow orders again. After starting out as an outlaw, Coughlin relocates to Florida – after a stint in prison – to work with the Italian mob family under Maso Pescatore in taking down the leader of the Irish mob. While in Florida, Coughlin makes the Pescatore family a lot of money, but runs into trouble with the KKK and the devoutly religious.
THE VERDICT: After ‘Gone Baby Gone’, ‘Live by Night’ is the second Ben Affleck directed film to be based on a novel by Dennis Lehane. The good news is that Affleck has rounded up an impressive cast for his fourth film as director, but the not so good news is that ‘Live By Night’ is messy, bloated and sincerely lacks relatable characters.
The cast of the film is made up of Ben Affleck, Zoe Saldana, Chris Messina, Sienna Miller, Chris Cooper, Scott Eastwood, Elle Fanning, Brendan Gleeson and Anthony Michael Hall. While this cast boasts some impressive names, not many of these normally strong actors get a lot to do; Chris Cooper and Elle Fanning have some lovely moments throughout the film, but Chris Messina just lurks in the background, Sienna Miller fumbles her way through an Irish accent, Brendan Gleeson has a small, almost insignificant role, and Affleck himself fails to make the outlaw and general law breaker Joe Coughlin a rounded, emotional character, and Coughlin is certainly not one that the audience can root for.
As screenwriter, Ben Affleck spends both too much and too little time on the set up of the story, with Coughlin’s shifting loyalties barely being examined throughout the script. The lead character is drawn as a wooden and emotionless man who is good at intimidation and seducing beautiful women, but has little else in the way of charm. The women in the film are catalysts rather than characters, and none of the characters are given enough motivation or emotion to make them seem real. The pieces are all there for ‘Live by Night’ to be a great film, but since Affleck has explored this type of underworld before, it seems his heart is not in it, making ‘Live by Night’ a whole lot less than the sum of its parts.
As director, Affleck seems to have lost the skill for punchy, humorous and tense films that he has displayed in the past with ‘Argo’, ‘Gone Baby Gone’ and ‘The Town’, and seems happy to allow ‘Live by Night’ to drift through its meandering storyline with nary a set piece to at least break up the action. None of the supporting cast truly get a moment to shine throughout the film, and choosing to put the emotional heart and soul of the film on his own shoulders means that the film lives – or more appropriately, dies – at the hands of Affleck’s strangely wooden performance.
In all, ‘Live by Night’ is not the exciting gangster revenge flick we hoped it would be. Affleck seems to have lost his golden touch as both actor and director, and although the film looks great, it is hard to find a character to root for in the film, much less one who goes through a true emotional journey. ‘Live by Night’ could have been a great gangster caper, but as it stands it is dull, bland and emotionless.
RATING: 2/5
Review by Brogen Hayes