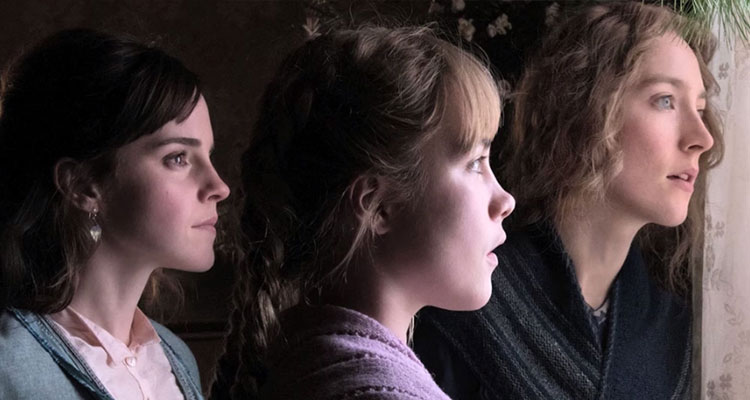 The Plot: As they wait for their father to return home from the destructive and divisive US Civil War, the March sisters go through an eventful few years in their young adulthood. The forthright Jo (Saoirse Ronan) is a burgeoning writer who rallies against the expected norms of a young woman of that time to marry and be content with her lot. That’s where her eldest sister Meg (Emma Watson) is heading, but she seems contents with that because she loves her fiance. The fiery Amy (Florence Pugh) and quiet Beth (Eliza Scanlen) are following their own paths in life, with Amy taking an interest in neighbour Laurie (Timothee Chalamet). As they grow up in the March household with their mother Marmee (Laura Dern), these little women will learn that adulthood has its challenges but they’ll always be together…

The Verdict: In the opening scene of this new version of Louisa May Alcott’s Little Women, proto-feminist Jo March attempts to sell her short stories to a dubious publisher. He knows what readers want, but Jo has other ideas. She’s tired of patriarchal 19th Century attitudes towards women, that they must marry and have a husband to support them. Not much has changed since then, at least in the film industry. With Charlize Theron quite rightly blasting the Golden Globes for failing to nominate a female director recently, one has to wonder what Jo would make of it. At the very least, the hugely talented Greta Gerwig should have been nominated. Audiences will soon discover why when they see what she’s done with her exquisite new take on the beloved novel.

Lady Bird was no fluke. Gerwig is as talented a director as she is a writer and actor. In her carefully-paced screenplay, she’s distilled the essence of Alcott’s 1868 novel but spiced it up for a modern audience expecting something a bit more relevant to our time. All of that is achieved with an appealing young cast of rising and established talent to bring these characters to vivid life. ‘Girls must go into the world and learn about things’ is a line in the film that could be the mission statement of this version. The four sisters go through an eventful few years far from the ravages of the Civil War in Massachusetts, but that’s not without its challenges. As they grow up from little women into young women, they find that their paths in life are diverging and thereby testing the bonds of sisterhood.

Gerwig and her muse Ronan have a good time playing with Jo and her expectations of life. She resists love with Laurie, the boy next door who is secretly crazy about her. She can’t equate love and marriage with talent and success. She fails to understand that they’re not mutually exclusive and that her real-life near-contemporary Mary Shelley was able to balance all of them while still a teenager. It’s fascinating to watch from a modern perspective, not just Jo’s story but her other sisters too as they navigate societal expectations. The novel has been passed down from generation to generation, with Gerwig herself a fan. She skillfully renders it into a handsomely-mounted production with authentic Massachusetts locations which have an autumnal glow about them, along with Alexandre Desplat’s evocative score to underline those heightened emotions.

There’s a lot of joy, humour and comfortable familiarity to be found in Little Women, including a last-minute dash that plays into the modern romcom set-up – but it doesn’t try to draw attention to itself. The performances are uniformly excellent from the young cast, rounded out by a gaunt Meryl Streep stealing her handful of scenes as the haughty Aunt March. There’s something else going on here though. Gerwig has refined her script into something quite fresh and special that makes it stand out from the numerous other film and TV versions, thereby justifying returning to this deep well once more. Little Women is a little wonder indeed.