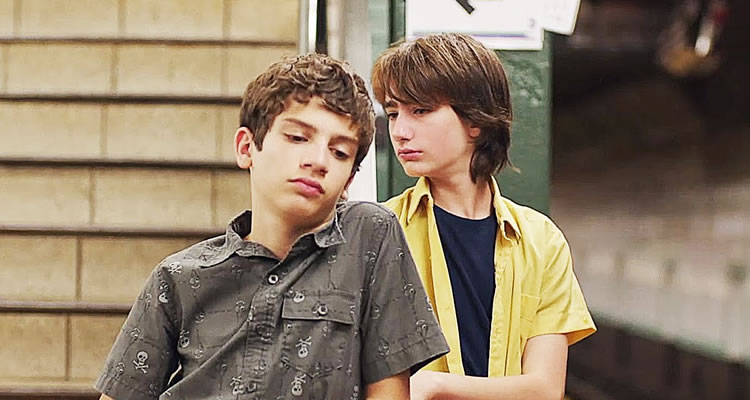 LITTLE MEN (USA | Greece/PG/85mins)
Directed by Ira Sachs. Starring Greg Kinnear, Alfred Molina, Jennifer Ehle, Michael Barbieri, Theo Taplitz
THE PLOT: Jake (Theo Taplitz) and Tony (Michael Barbieri) become fast friends when Jake’s parents inherit the building where Tony’s mother Leonor (Paulina Garcia) has had a dress shop for many years. Although Jake’s grandfather never increased the rent, Jake’s father Brian (Greg Kinear) is determined to, and this puts strain on the friendship between the two boys.
THE VERDICT: Directed by Ira Sachs, who most recently brought us the charming and beautiful ‘Love is Strange’, ‘Little Men’ is the story of kids who find solace and friendship in one another, only to have this challenged due to gentrification of the Brooklyn.
Both Theo Taplitz and Michael Barbieri are excellent as Jake and Tony, and their relationship on screen is warm and natural. They influence one another in the way only young kids can, and they are a joy to watch together on screen. Greg Kinnear, Jennifer Ehle, Alfred Molina and Paulina Garcia play the adults in the film, and they are not only lovely with the young cast, but with one another, even as the situation gets more and more tense.
Written for the screen by Ira Sachs and Mauricio Zacharias, ‘Little Men’ is as charming and touching as Love is Strange, but examines the love that comes with friendship. As with Sachs’ previous film, love is severely put to the test in the film, and it is this that keeps the audience engaged with these two young kids. The dialogue is strong, and feels completely natural, although there are some issues with the story seeming a little too thin to fill the admittedly short 85 minute running time.
As director, Ira Sachs makes all the relationships in the film feel real – even when the kids stop talking to their parents, it feels as though it comes from a place of reality rather than the script – and makes sure to out forward the concept that even though this seems like a simple situation to the kids, it is really more complicated than it seems. Telling the story almost exclusively through the eyes of the children makes the film all the more touching, but there are times when the energy of the story drops, then scrambles to catch up. There is no major set piece to end the film, but emotions run strong with this one, and there is a sweetness and feeling of reality to the final scene.
In all, ‘Little Men’ is sweet and touching, and contains strong performances from Kinnear, Ehle and Garcia, while the two youngest members of the cast shine in their relationship to one another. There are times when the story feels dragged out though, and the energy of the film struggles to recover after it lags.
RATING: 3.5/5
Review by Brogen Hayes