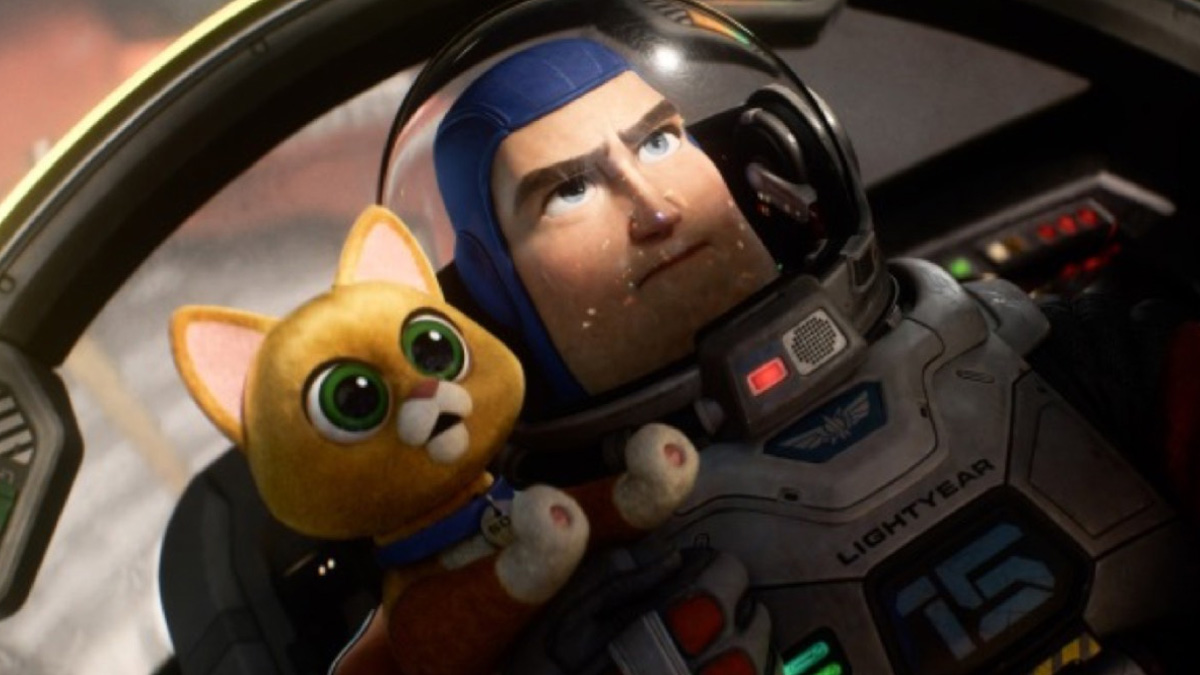 The Plot: Space Ranger Buzz Lightyear (Chris Evans) is on a mission to a distant planet with his team, but things go awry and they crash land. Marooned on this alien planet with no apparent way home, Buzz blames himself and sets out to discover a solution. It’s going to take some time, which is why he’s assigned a robot cat named Sox (Peter Sohn) to keep him company. As Buzz works through the problems with space travel, he finds himself landed with a ragtag renegade crew headed by Izzy (Keke Palmer) as they take on a new and yet old enemy…

The Verdict: Welcome back to the big screen, Pixar. We sure missed you. After the frankly baffling decision by their Disney overlords to unceremoniously dump out a hat trick of their most recent adventures to streaming only, Pixar are back where they really belong with Lightyear. It’s a welcome cinematic return for their brand of gorgeous, large-scale animation combined with an even bigger heart and the guiding principle from the Pixar Braintrust that the story is always going to be king here. Lightyear is not so much a prequel but an expanded backstory for cocky Space Ranger Buzz Lightyear. That’s the man, not the toy. As the opening titles state, Andy’s Buzz Lightyear toy in Toy Story was inspired by the heroic adventures of the man himself as depicted in a movie. This is that movie, blown up into an epic space adventure that crosses space and time, goes at breakneck speed to infinity and… you know.

The script by director Angus MacLane and co-writers Matthew Aldrich and Jason Headley is more intricate than it initially appears. They ground the character of Buzz in his heroics and guilt complex about not getting his crew off the planet and back home. His failure to complete the mission becomes a millstone around his neck, but he keeps on trying and that’s something worth holding onto. It’s the stronger element of the script, keeping Buzz in focus throughout and finding a character arc that’s smoothed out. They also give him an amusing and cleverly-designed sidekick in Sox, a robocat with a dry sense of humour and an R2-D2’s worth of hidden gadgets (cue some major toy merchandising potential). Pixar are renowned for their commitment to story, but their time away from the big screen shows some rustiness in the joints. This is most evident in the return of big bad Zurg (James Brolin), something of a creaky recreation of the Toy Story 2 villain. That plot element just goes in random circles like a broken robot toy. Let’s just say that the less said about Zurg the better.

Visually speaking, the film is eye-popping candy as it becomes evident that this is Pixar’s heartfelt tribute to their favourite science fiction films. Everything from 2001: A Space Odyssey to Star Wars to Star Trek and even Interstellar, there’s a lot to take in here. And while it feels familiar in some spots, it’s also distinctly its own thing as it goes into hyperdrive and pushes the character to new heights. It’s entertaining, action-packed, frequently funny and has its heart in the right place. It unsurprisingly went down well with this reviewer’s audience. And yet there’s something just… missing. That Pixar magic dust that was so evident in the majestic WALL·E (arguably their best film) is barely detectable. Enjoyable yes, but Lightyear leaves an overall impression of being a space oddity in the Toy Story universe. It’s not particularly clear where Lightyear the man ends and Buzz the toy inspired by him begins. They seem to be different characters, notably in the sense of humour department. That link could have been hinted at in the two brief post-credit scenes, but Pixar decided otherwise.

So, Lightyear is something of a standalone curio but it should still be a hit with audiences. However, having Pixar back in the cinema is the real treasure to take from this film. Let’s hope that it stays that way, right Disney?