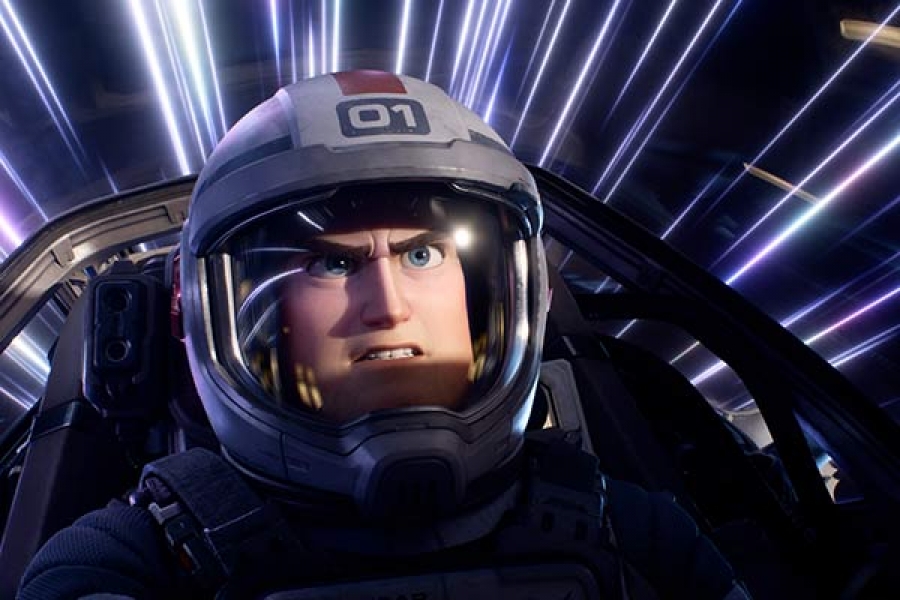 Who is Buzz Lightyear? We caught up with the creative team behind the new film to learn about Lightyear’s journey from storyboard to the big screen.

It is 27 years since we first heard the iconic lines “To infinity and beyond” in the first film of the Toy Story franchise. Buzz Lightyear, originally voiced by Tim Allen, is the astronaut toy who can’t quite accept that he is a toy. With help from his friend, Woody, Buzz eventually learns he is a toy, but it doesn’t stop his indomitable, adventurous spirit.

Each of the franchise’s characters are toys based on fictional in-universe film characters, so what is Buzz’s story? What film sparked a slew of astronaut toys, and just why is the figure so popular with children? A new film from Pixar, Lightyear, tells everything we need to know about Buzz Lightyear, who is voiced by Chris Evans. The trailer got almost 100 million hits in less than 24 hours, proving the appetite for Buzz is strong. We logged on to see the creative team behind the film give a press presentation detailing their journey from storyboard to the big screen.

Angus MacLane directs Lightyear and says that finding the right actor to voice Buzz was crucial to getting the film right.

“Toy Story Buzz’s voice is iconic, and you run the risk of imitation if you cast an actor with a similar voice to Tim Allen. We needed someone with gravitas and seriousness who could balance that with comedy. It is a very narrow window of actors that could do that. We have seen Chris Evans do comedy and drama; he exemplifies that combination. We were always impressed by his ability not to seem too goofy but to be able to laugh at himself. Those qualities are essential for the character.”

MacLane points out that this is not the first time that Evans has played a character out of time, but that the comedic elements make Buzz stand out from Captain America.

“Evans has played a square-jawed man out of time before; where we see him again trapped in a future he doesn’t recognize. We see him do that again here, but he plays that very comedically, and comedy is important to the story; there is a lot of comedy around Buzz’s character in the Toy Story films, so we had to make sure we had it here too. Chris can also do subtle comedy very well, which is great for introducing tone to the film.”

Galyn Susman is the film’s producer, and she stresses the importance of finding the actor but says Evans’s love of animation was a bonus.

“Our Buzz actor needed to have that nice rich-sounding voice, be both dramatic and comedic, and most importantly, be heroic without coming off as arrogant. That is a tall order, and we immediately knew we had to ask Chris. We didn’t know that he is a huge animation fan and would bring that love and passion into the project as well as his acting talents. He attended animation dailies and gave the team a pep talk. It’s really been a wonderful collaboration, and we couldn’t be happier.”

MacLane says what makes Buzz interesting is his relationship with time and his surroundings, so it made sense to incorporate that into the standalone film.

“This trait continues in the shorts. To make a standalone movie work, we need to ground the story in a universal truth. I chose time. Time is moving on, it is universal for all of us, and it has a huge impact on Buzz. He travels rapidly through time because of his job, which separates him from society and his loved ones. Buzz is a fish out of light years, and he is trying to get back to the past to correct a mistake from his youth, making him a hero out of his own time.”

To create Buzz’s world and to ensure that Star Command looked as authentic as possible, the film’s creatives turned to the experts and spent time researching with NASA.

“We went on a research trip to NASA, met with a spacesuit design consultant and looked at reference materials from the Smithsonian,” says Fran Kalal, the film’s tailoring and simulation supervisor who was tasked with creating several different space suits for Buzz.

Kalal says that Pixar developed new skills to ensure that the costumes look as realistic as possible.

“The level of detail on the suit is a new achievement for our hard surface modelling at Pixar. The texturing and stitching on the gloves bring a new level of realism to the costume, and the graphic design integration brings a new level of detail and believability to the suit. These complex costumes require extreme collaboration between art modelling, rigging, tailoring, shading, tool, integration, shot simulation, and lighting artists; it was all hands on deck.”

This precise approach was taken across the board in all aspects of designs, from spaceships to space tools. We got a sneak preview of some early footage, and Lightyear is quite possibly the most detailed animation film to hit screens in recent years.

LIGHTYEAR is at Irish cinemas from June 17th