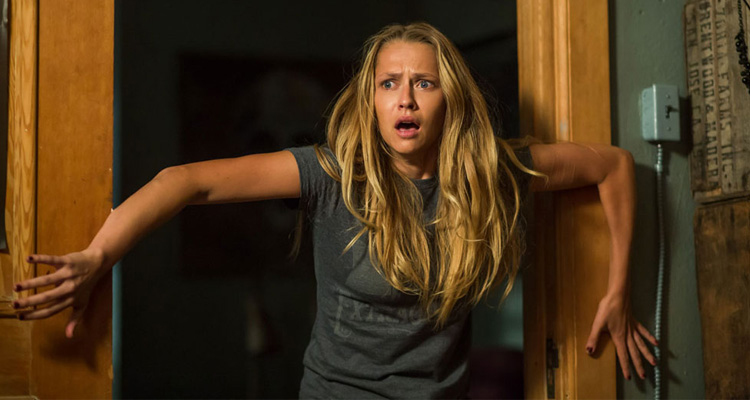 LIGHTS OUT is the new horror movie terrifying movie goers across the world. Directed by directed by David F. Sandberg in his major directorial debut, who’s best known for his no-budget horror short films under the “ponysmasher” alias. Light’s Out is based on his 2013 short film and features Lotta Losten, who also starred in the short. Made on a budget of just $4.9 million, LIGHTS OUT has already earned a whopping $87 million at the box office and is responsible for keeping many of us awake at night.

QUESTION: When did you first realize the original short film you made was getting such a huge reaction?
DAVID F. SANDBERG: It just happened suddenly. We had put it online and a few months later, I saw that someone had linked to the film and I thought that was awesome. So I went to see the stats for the video and it was at 8,000 views. I was thinking, ‘That’s great!’ All of sudden it was 70,000 views and it just kept going up. It was over a million, then two million very suddenly. Then people started getting in touch, people who wanted to work with us, managers, agents, producers – the whole circus. It was so much attention that I had to make spreadsheets with everyone I talked to and what was said last because of the time difference. The days were pretty normal, but then the evenings and the nights I’d be on the phone with people in Hollywood. It was weird!

QUESTION: What was it about producer Lawrence Grey’s pitch that made you feel he was the right guy to work with?
DAVID F. SANDBERG: He was very responsive to the idea I had for what the feature would be. We had very similar tastes and he offered good feedback when I presented what I wanted to do. He just seemed to be wanting to do the same kind of film.

QUESTION: How has the journey been?
DAVID F. SANDBERG: There has been a lot of learning and adjusting. I’m so used to doing everything myself on a very small scale. This was a much bigger scale and a whole lot of people. So it’s just been weird having other people working with me on the movie and me just telling them what to do, but also pretty amazing.

The first sequence in the film was among the scenes I looked forward to the most, and that I planned out the most, because I storyboarded the whole thing. But to then see all the pools of light that I’ve drawn turned into reality was incredible.

QUESTION: You wrote a template outline that screenwriter Eric Heisserer worked from. Can you talk about that?
DAVID F. SANDBERG: It was about 14 to 17 pages that pretty much told the story of the movie, although there have been some tweaks. It was the mother and daughter dynamic, where the daughter needs to come back because her brother is going through what she went through when she was a kid, and her realizing that it wasn’t just her mom being crazy – there’s something real.

QUESTION: How did you hit upon depression as a core theme?
DAVID F. SANDBERG: Mental illness has always fascinated me and I’ve been depressed a lot as well throughout my life. But your brain is how you interpret the world, so when the brain stops functioning, anything can – to you – become real. You can encounter monsters – we know they don’t exist, but they can become real to you. So losing your mind is the most terrifying thing to me.

I wanted to do sort of an allegory of mental illness and depression. I think the original intent may have been a little more arthouse film than the final result, which is a little more popcorn, but it still has that allegory, I would say – just in a more fun way than it might otherwise have been.

QUESTION: How was it giving over the kind of control you have on a short film and collaborating? Was it an easy transition to make?
DAVID F. SANDBERG: Yes and no. On the one hand, I’m used to doing it myself. I shoot all my films; I’ve never shot anyone else’s script. But, at the same time, these are professionals. They do such a good job that I often feel like I’m the weakest link – I’m the one with the least experience! It’s weird coming in and knowing I’m supposed to tell these pros what to do.

QUESTION: Has the shoot been a learning experience for you as a filmmaker?
DAVID F. SANDBERG: Very much so. I’ve had to ask the first A.D. [assistant director] when I actually say, ‘Action’ [laughs]. He told me, ‘When the camera guy says “set,” you can say “action”…’ A lot of it has been meeting with people like the script supervisor and asking what they do. I’d never met people with those jobs before, so this is like film school, but getting paid for it.

QUESTION: Is it reassuring to still be working with your wife, Lotta Losten, who plays Esther in the film?
DAVID F. SANDBERG: Absolutely good to get that in. All the horror I’ve done so far we’ve done together, so I can’t break that tradition, she has to be in it as well.

QUESTION: How was it working with Teresa Palmer and Maria Bello, who play Rebecca and her mother, Sophie?
DAVID F. SANDBERG: It was great. It all happened so fast that everyone was cast so late. I didn’t meet Maria in person until five minutes before the first scene. It was, ‘Hey. Nice to meet you. And… action!’ So, the big advantage of having that calibre of actors was that it still worked out, that we didn’t need to do a table read and all that. They found their parts really quickly and made my job as a director really easy because they’re professionals. I’m a huge fan of Maria Bello, so to get to work with her was amazing.

QUESTION: How did James Wan impact the film as producer?
DAVID F. SANDBERG: He’s James Wan, so he has a lot of clout! He could make things happen, which was great. He told me a lot about his journey because he started out with a short that then became Saw, and he came from another country, so he had gone through that journey and could let me know about the craziness.

What James kept telling me was to just have fun with it because it’s a pretty weird business. I tried as much as possible, but it’s kind of hard to have fun when you’re so stressed out. I felt like this is my shot and I wanted to work hard to make it great. You forget to have fun!

QUESTION: The movie doesn’t rely on many CG effects. Was that by choice?
DAVID F. SANDBERG: I wanted to keep it as practical as possible, especially not have a CG creature as the antagonist. There’s a bit of trickery to make Diana appear and disappear, but yeah, it’s a real person in make-up. To me, it makes it scarier because when you see a CGI creature, the brain kind of knows that it’s pasted in.

QUESTION: How did the editing process shape the movie?
DAVID F. SANDBERG: That was such a new experience for me as well because I’ve always edited my films myself. Now we had the editor working and cutting it together as we were shooting. So as soon as we wrapped, I could see a first rough cut of the film, which was super depressing. The first cut you see is not at all what you have in mind, but then you work with it; you change things, take things out; you add music and sound and it becomes something you like.

That was strange for me, not being used to having an editor, because you just know what you want to do. But I’ve never worked with an AVID before, so I couldn’t do it myself and had to trust the editor. And it worked out great because when you work with other people, they can come up with things that you’d never do, so that’s great. Yet it can be frustrating at first, because you have to give up control.

QUESTION: You have an animation and effects background, so how was it working with the visual effects team?
DAVID F. SANDBERG: I actually wound up doing a few of the effects myself on certain shots! There’s not a whole lot in there – little fixes and tweaks, and painting things out, like wires – and some of it I could do myself, but we of course had a VFX house that did the majority of them.

QUESTION: What would you say are your filmmaking influences in this genre?
DAVID F. SANDBERG: For horror, I like a lot of sci-fi – Alien, The Thing, John Carpenter’s stuff. But I try to watch as much as I can. There are a lot of bad horror movies out there, so I tried to expand my horizons and watch a lot of different kinds of films, especially older movies, because there’s a lot to learn from them.

Just the other week I saw Fritz Lang’s M. I’d never seen it, but you can see where a lot of things came from. The Haunting, the old 1960s version, which is this great horror movie. That was an influence. I love the cinemascope framing of that film and I wanted to bring that to Lights Out in some way.

QUESTION: What would you say were the most challenging and most thrilling parts of this experience for you?
DAVID F. SANDBERG: The most challenging part was the fact that everything was so new. I’d never been on a film set before, and the first time, I was the director, which was pretty terrifying! So it was just wrapping my head around it and trying not to freak out.