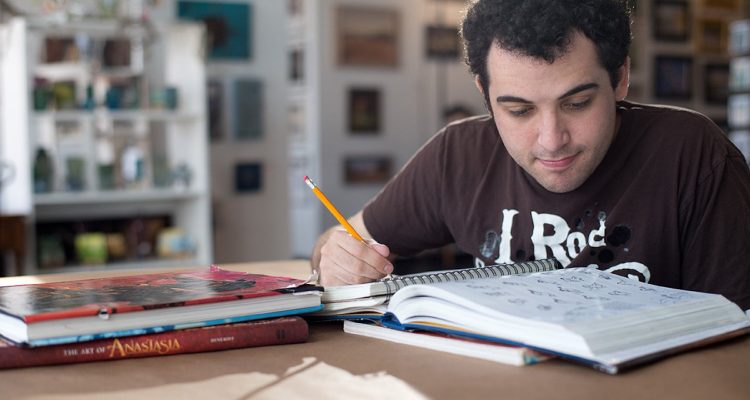 LIFE, ANIMATED (USA/TBC/89mins)
Directed by Roger Ross Williams. Starring Owen Suskind, Ron Suskind, Jonathan Freeman, Gilbert Gottfried, Alan Rosenblatt
THE PLOT: When he was three years old, Owen Suskind was diagnosed with autism, and retreated into his own world. Over time, Owen’s parents realised that watching animated Disney films was not only something the family could do together, but it was also something that Owen used to communicate with his family a little at a time. Now aged 23, Owen is just about to move out of home into an assisted living facility, and is facing a whole new set of challenges on his own.
THE VERDICT: Inspired by the book that Owen’s father Ron wrote about living with an autistic child, and trying to find a way to reach him, Life, Animated is a look into the world of a family who are struggling to communicate. Through interviews with the family and home movie footage, a picture is painted of a bright young boy who suddenly struggled to understand and communicate with the world around him, and his only way out was to use a scripted story that never changed, no matter how much everything else did.
Director Roger Ross Williams has carefully put ‘Life, Animated’ together, and obviously had the utmost trust from the Suskind family. Not only does Ross Williams interview Own, his father Ron, mother Cornelia and brother Walter, but he also follows the family as they prepare for Owen to move out and face the world almost alone. Owen comes across as a bright, cheerful and happy person, delighted to be alive and, although he struggles in certain situations, happy to be around people and celebrate his life. What becomes abundantly clear early on in the film is just how far Owen has come from a young boy who constantly spoke gibberish, to a young man who set up a Disney club to help others with learning disabilities – and to make friends – and moved out to live on his own.
It is clear that the Suskind family is loving, united and wonderfully kind, and this played a huge part in Owen being able to come as far as he has, and it is the Suskind’s emotion that gives the film heart and soul, as well as the infectious joy for life that emanates from Owen. Owen is open and honest about how he felt at the time when things went bad for him, and how Disney movies and his identifying with them made an important pathway for him in his life. Roger Ross Williams intersperses a short animated story based on one of Owen’s stories, throughout the film, and it is in this that the audience begins to understand where Owen is coming from, and how these animated films have helped him.
‘Life, Animated’ is a powerful look at communication, and just how an obsession can be something used to open people up when they shut down from the world that surrounds them. It is clear that the Suskind family, and Owen, are an exceptional group of people, but there are lessons here to take away for life in general, and although the film doesn’t so much end as fizzle out, it is a pleasure to spend time with this family.
RATING: 4/5
Review by Brogen Hayes

Review by Brogen Hayes
4
A pleasure