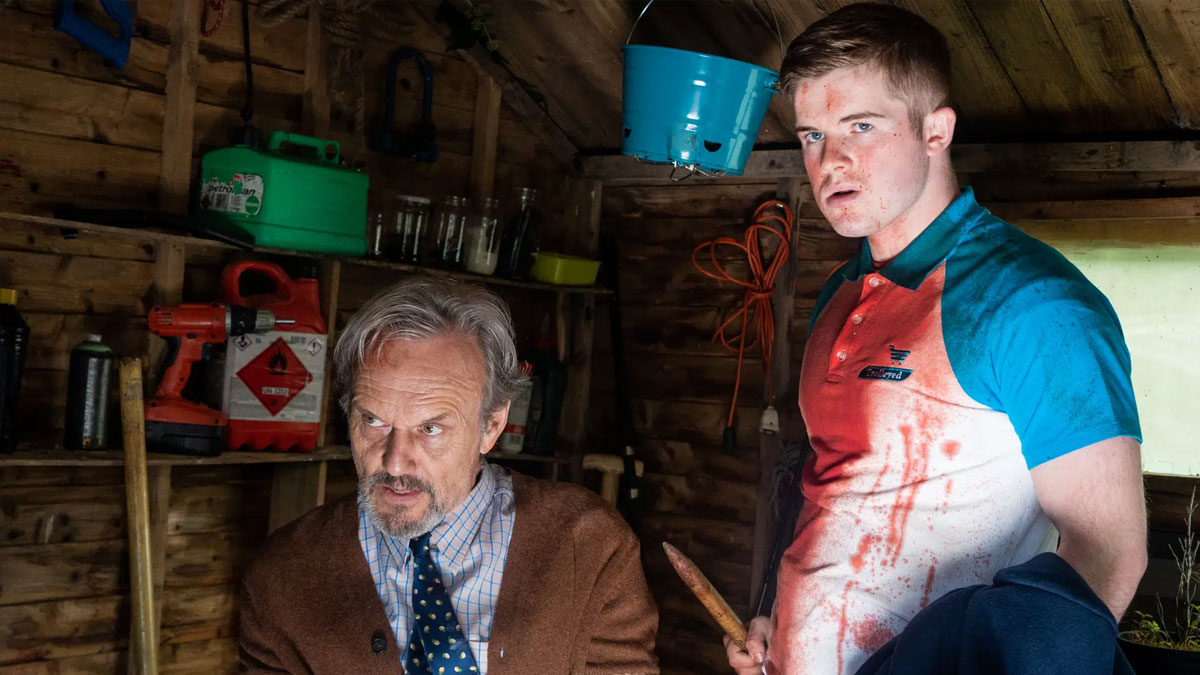 The Plot: Deco (Eoin Duffy) gets a vampire’s kiss from Sheila (Mary Murray) at a party. Now he’s allergic to sunlight, grows fangs and has developed a need for blood. His brother Matt (Karl Rice) is not too impressed by this, but they’re still brothers so he lets him into the family home anyway. That’s when he causes chaos and very nearly bites Matt, so he calls in specialist doctor Henry (Anthony Head) to sort him out. On the trail of an outbreak of vampirism, Henry knows what’s going on of course and suggests that the stake is the only option. Is there another way to solve this bloody problem before it’s too late for all of them?

The Verdict: Let The Wrong One In, a cheekily-titled spin on a well-regarded horror film, sees Conor McMahon return to feature directing for the first time in nearly a decade. It’s precisely what you might expect from the writer/director of Stitches, given his penchant for lashings of blood-soaked gore, amped-up comedy and a hearty dose of not taking itself seriously at all. It’s also a Dublin film through and through, from the enthusiastic cast to the accents to the humour and a bizarre, has-to-be-seen-to-be-believed ending that makes the Dublin skyline look very different for a while at least. At its core, it’s the kind of vampiric story of brotherly love that propelled the likes of The Lost Boys to memorable heights, but shot through with an Irish sensibility. Think Shaun Of The Dead meets The Young Offenders, but without the sophistication of the former. For a lot of ‘Let The Wrong One In’ relies quite heavily on its cast to slay the audience into submission and as a result, it doesn’t always work.

It would be fair to say walking in blind to this film would be inadvisable, as it’s made with a specific audience in mind. Horror and comedy are welcoming bedfellows that go together like flies and the undead, but getting the right tone can be tricky. Go too much in either direction and it becomes quite uneven, threatening to knock the film into the murky depths of the horror dungeon. It’s not really a concern for McMahon it seems, since he’s dialled up almost everything here to 11, maybe even 12. Apart from Anthony Head’s amusingly dry performance as a vampire slayer, a nod to his most iconic role of course, everyone else in the cast list has been going through bottles of overacting pills to see who can be the most outrageous (take a bow, Mary Murray). There’s no off switch here, with McMahon throwing everything at the screen from gallons of blood to melting corpses in an attempt to keep the audience entertained (which he just about does). The 16 rating seems rather lenient.

It sort-of works in its own demented way, being equal parts amusingly brilliant and bloody awful at the same time. For every striking scene involving an inventive death there’s juvenile toilet humour to remind us how rough this is. That makes it tonally uneven to the point where it almost seems deliberate on McMahon’s part. He knows his horror conventions and plays them to the hilt, but he does inject some interesting concepts into his script like what happens if fangs are extracted or a vampire putting a stake back in to stop the blood flow (ha-ha). It’s those little moments which make the film stand out rather than the larger, over-the-top sequences that bludgeon you to death. Unusually, he chose to set most of the film during daylight though he missed a chance to make a joke about the cloudy Irish weather not affecting vampires that much. This isn’t sunny California.

An Irish spin on the vampire film, Let The Wrong One In certainly has its moments and its heart is in the right place (preferably torn out of its chest), but it’s also hard to shake off the impression that it’s scrappy, knockabout nonsense. For an Irish film that could very easily have disappeared onto a streaming platform, fair play to McMahon on getting it into 50 screens.