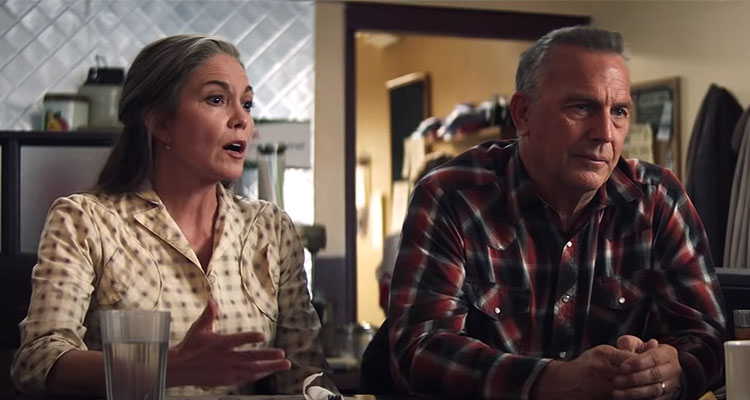 The Plot: Montana, the 1960s. Married couple George (Kevin Costner) and Margaret (Diane Lane) mourn the loss of their son and what this means for his young family. Their daughter-in-law Lorna (Kayli Carter) has now remarried into the Weboy clan in North Dakota. Margaret becomes concerned about the violent behaviour of Lorna’s new husband and how this will impact their grandson’s development as a young child. When Lorna takes off without notice one night, George and Margaret hit the road to track her down. They find her at the Weboy ranch, headed up by matriarch Blanche (Lesley Manville). As tensions grow between the two clans over the future of the young boy, George and Margaret have a difficult choice to make…

The Verdict: Traditional westerns don’t always have to be set in the lawless times of 1880s America. Sometimes they can bleed into the 20th Century, evoking a bygone era as modernity takes over – such as Sam Peckinpah’s classic The Wild Bunch. Larry Watson’s 2013 novel Let Him Go has more than a touch of the western to it. It starts in the Big Sky Country of Montana and moves into Native American country in North Dakota. Horses are ridden, guns are loaded and fired and a day of reckoning is coming. Two decent, salt-of-the-earth grandparents make a daring move to rescue their former daughter-in-law and grandson from the clutches of a controlling family with clear ideas of how to raise their own. The stage is set for conflict and a battle of wills over the life of a boy too young to understand what’s going on. The actions of these two families will change everything.

Director Thomas Bezucha also adapts Watson’s novel, distilling it into a pulpy western-thriller that comes in two halves. The first half focuses on the agonising choice that George and Margaret have to make: to take their grandson and bring him back to the kind of home where he’ll be raised properly. The kind of home their grandson was supposed to have, had his father not died. Bezucha builds up the tension slowly, hinting at the trouble that’s coming their way. Retired cop George is a man of few words and even then he doesn’t mince them. Margaret is the more diplomatic of the pair, a fact that comes into play when the two clans sit down for a tense supper. They’ve met their match in matriarch Blanche, played to perfection by a formidable Lesley Manville. Unleashing the same coiled snake aspect of her performance that she so brilliantly essayed in Phantom Thread, she’s easily the best thing about the film. Don’t mess with this character.

Having so skillfully set up the conflict to come, the second half is about the pay-off. This is where Bezucha shifts gears quickly and moves into more familiar genre territory. This is well-executed by Bezucha, ramping up the tension as George and Margaret make a desperate bid to do what’s necessary. However, one can’t help but think that if Bezucha had held back a bit longer and developed some of the supporting characters more, then the film would be more narratively stronger and the pay-off more emotionally rewarding. It’s essentially Costner and Lane’s film, reunited after playing Superman’s earthbound parents. The veteran actors anchor the film well, with Costner in particular aging like a fine wine into gruff, strong character parts befitting his rugged All-American persona. Seeing him back in the saddle in cowboy country is welcome.

That’s not Montana or North Dakota in the film though. It’s Alberta, Canada – also a key filming location for the 1978 Superman. Bezucha frames his characters and their small story of latent violence against huge scenic backdrops, with minimal scenes set in 1960s towns. The western vibe is there throughout, with local law enforcement being unhelpful and our lead characters having to resolve the situation themselves. It works well as both a western and a thriller, while still keeping it in an idealistic, post-JFK time period. While it could have had more dramatic face-offs and less gunplay, Let Him Go is a tense and thrilling watch throughout.