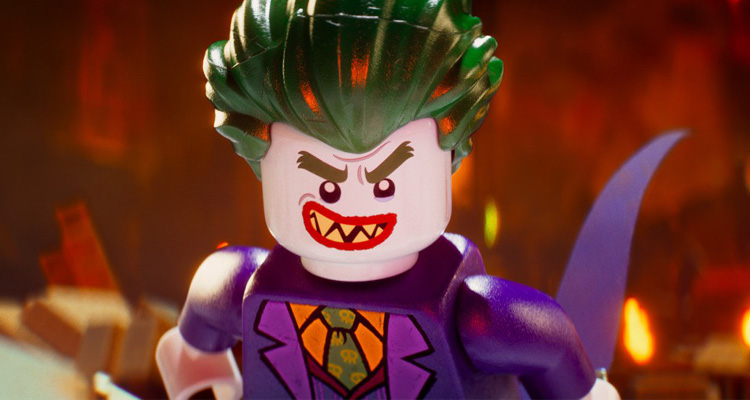 THE LEGO BATMAN MOVIE (USA | Denmark/G/104mins)
Directed by Chris McKay. Starring Will Arnett, Zach Galiafinakis, Michael Cera, Rosario Dawson, Ralph Fiennes, Jenny Slate, Ellie Kemper
THE PLOT: Fresh from his adventures in ‘The LEGO Movie’, Batman (Will Arnett) finds himself facing a new and unexpected adversary; himself. When The Joker (Zach Galiafinakis) demands that Batman acknowledge that he is the Caped Crusader’s greatest enemy, Batman is quick to remind the Clown Prince of Crime that he doesn’t need anyone; “I like to fight around”. Of course The Joker is not likely to stand for that, and although Batman claims to relish his life of solitude, he will need all of his wits, and his friends around him to take down the greatest threat that Gotham City has ever seen.
THE VERDICT: Since ‘The LEGO Movie’ was such a success, and delighted both adults and kids alike, it is not surprising that a follow up is on the way. What is surprising, however, is that the franchise decided to spin off in a new direction with ”The LEGO Batman Movie’ before returning to the world of Bricksburg to carry on the adventures of Emmett and Wyldstyle. That said, ‘The LEGO Batman Movie’ is an easy win, with a built in audience already in place and more villains and heroes than you can shake a (LEGO) stick at.
Will Arnett resumes his role as Batman from ‘The LEGO Movie’, and obviously has a whale of a time with the rapid-fire jokes, the throwaway references to Batmans past and the energy of the film. Arnett makes Batman an egotistical spoiled brat, exacerbating and stretching the personality of Batman, while also turning the idea of the humble superhero on it’s head. Elsewhere, Ralph Fiennes, Ellie Kemper, Rosario Dawson, Michael Cera, Mariah Carey, Eddie Izzard, Jenny Slate, Billy Dee Williams and Apple’s Siri lend their voices to characters in the film, and the sense of energy and fun that these performers had with their characters leaps off the screen.
The screenplay, written by Seth Grahame-Smith, Chris McKenna and Erik Sommers – the latter known for their work on the absurd and wonderful Community for TV – keeps the over the top and ridiculously fun feel of ‘The LEGO Movie’, while also having fun with the notion that Batman is his own worst enemy, and his self-imposed solitude does not help. The jokes come thick and fast throughout the film, and the new back stories for some of the characters make sense for the ‘LEGO Movie’ franchise, even though they are not strictly canon. Bringing in some of the lesser known rogues from the Batman universe – such as The Condiment King, Orca, King Tut, Calendar Man, Mime and Zodiac Master is a great nod to the legacy of Batman and his stories both in and off screen, while bringing in LEGO villains from other franchises just underlines the feel of the entire LEGO franchise; that this is how a kid would play with LEGO.
Director Chris McKay, a self-proclaimed mega Batman fan, keeps the energy of the film going at almost frantic pace, while managing to keep the jokes coming, the visual gags working and the infectious feeling of fun going throughout the entire film. The voice performances of the film are great and bring the LEGO world to life, the film is just self aware enough to be fun and small touches underline the childlike heart of the film. There are times when the film lacks the almost tangible magic of ‘The LEGO Movie’ proper, but it hard to resist this labour of love and laughs that explodes on the screen in a roar of irreverent fun.
In all, there are times when ‘The LEGO Batman Movie’ struggles to cash the cheque written by ‘The LEGO Movie’, but the cast is on form, there are tons of jokes and laughs to be had, as well as references to the Batmans of the past that we know and love. Kids will be enthralled and adults similarly laughing at this wild, frenetic and colourful celebration of The Caped Crusader, and just what we love about him and the characters that surround him.
RATING: 4/5
Review by Brogen Hayes