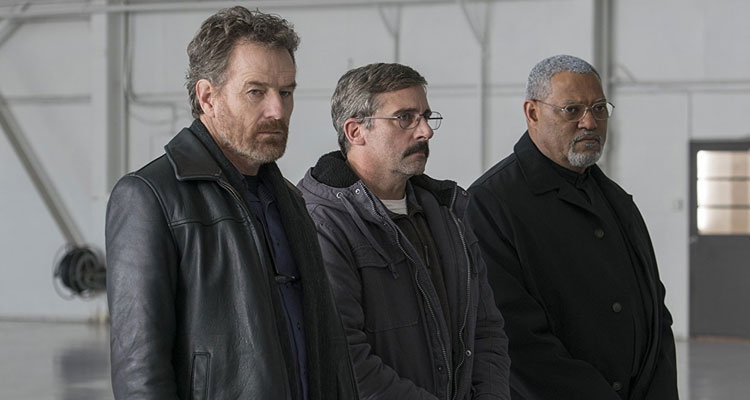 Last Flag Flying (USA / 15A / 124 mins)
Directed by Richard Linklater. Starring Bryan Cranston, Laurence Fishburne, Steve Carell, J. Quinton Johnson.
THE PLOT: Barman Sal (Bryan Cranston) is surprised one evening when an old face turns up – sadsack Larry (Steve Carell). Both of them served as Marines in the Vietnam War. Time has moved on though and it’s now 2003, with Saddam Hussein just recently captured. The two catch up and rope in third former Marine Richard (Laurence Fishburne), now a Reverend with a bad leg and a dedicated congregation. Larry’s son has been killed in action in Iraq and would like Sal and Richard to join him in laying him to rest. Larry resists the honour of burying his 21-year-old son in Arlington Cemetery, so the trio bond on a road trip to bring the body back to where it really belongs – home…
THE VERDICT: Richard Linklater’s latest film Last Flag Flying arrives with little promotional fanfare, but it’s a quietly powerful character piece that should resonate with audiences. On its surface, it could have been a flag-waving statement of American patriotism or a political condemnation of a controversial war. Leave that to someone more like Oliver Stone, even if his voice is blunted these days. Linklater is more interested in the fall-out of the Iraq War on a father who has to bury his young son. It’s a more human story which has a great deal of humour at its core.
Based on the novel by Darryl Ponicsan, it’s a spiritual sequel to the writer’s own The Last Detail, which was itself adapted into an acclaimed Jack Nicholson film in 1973. Ponicsan co-wrote the screenplay for Last Flag Flying with Ponicsan, filling it with characters and incidents that are typical of a road movie. There are conflicts with the military, flirtations with women, roads that lead down different paths in life, bust-ups and make-ups. Nothing too surprising or revelatory then, with the characters changing only slightly during the journey. A bit more change would have been welcome, just to round out the characters more.
Each of the three characters are wildly different from each other, with time catching up on them in ways they hadn’t quite imagined. Flawed yes, but there’s an innate decency to them which is why they come across as supporting each other so well. Cranston has said that he knows guys like Sal and was able to project that into his performance. It’s a rugged but agreeable performance. Carell tones down the flamboyance for a grieving father that shows his range for dramatic roles, while old reliable Fishburne is a force of nature (or God). Linklater’s direction is straightforward, taking a backseat so that his trio of actors can take centre stage. It may lack Linklater’s usually strong directorial stamp, but Last Flag Flying is still a journey worth taking.
RATING: 3 / 5
Review by Gareth O’Connor