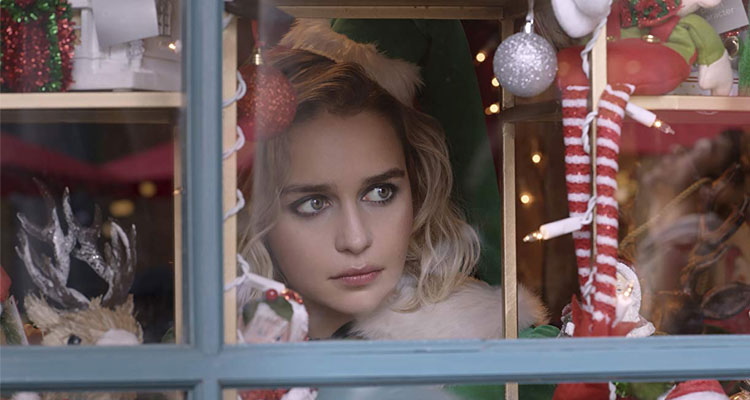 The Plot: It’s Christmas in London. Kate (Emilia Clarke), a disaster-prone singleton, works as an elf in a Covent Garden Christmas shop run by her boss Santa (Michelle Yeoh). Kate is an embarrassment to her family and to pretty much everyone who knows her, with her constant search to find a sofa to crash on for the night. She encounters the dishy Tom (Henry Golding) hanging around outside the shop one day. They strike up a conversation which leads them on an adventure to the less touristy spots in the city. For once, Kate seems to have found someone that can offer her stability. But the flighty Tom has a habit of coming and going, leaving Kate unsure of what his intentions are…

The Verdict: Sometimes you’ve just gotta have faith. The tagline for Paul Feig’s new romcom Last Christmas nods towards a George Michael song. Being a Christmas movie, it also nods towards Hans Gruber’s comment about Christmas being a time of miracles and being of good cheer. There’s plenty of both in Last Christmas, but you could find your faith in this film severely tested by its lack of imagination and corny plotting. There’s also a high quotient of Christmas cheese that makes it a stodgy film that is hard to digest. As the wearying and often meandering plot winds on, it ends up like the movie equivalent of the awkward auntie at the Christmas dinner table. Not on a shining Christmas star on any of the talents’ filmographies, it may become the film that they wish could be swept under the rug with the mince pie crumbs.

Most of the blame lies with Emma Thompson and Bryony Kimming’s script, which comes from a story by Thompson and her husband Greg Wise. It starts off amusingly enough, as car-crash Kate hurtles from one disaster date to another, while remaining distant from the people who matter the most – her family. When the meet-cute comes with Tom’s entrance, spiky banter comes into play and the script treads familiar but not unwelcome territory. In a sense, Feig and co are trying to emulate a Richard Curtis romcom. But while Curtis has the art of a well-engineered British romcom down to a T, Last Christmas is the vague pretender. The film is meant to be inspired by the songs of the late George Michael and Wham!, but they’re more like backing tracks to a story that takes the songs and attempts to construct a credible story out of the lyrics. Not very convincingly either, it has to be said.

The script leans heavily on audience acceptance of what follows with Kate and Tom’s story. While Clarke and Golding do a decent job of keeping their amiable characters on point, the loopy script has other ideas. It does a rug pull in the third act, which is so cornball and risible that one has to wonder what everyone was thinking here. Is this all the film has to offer and say for itself? So it seems. Although, Feig does try to deliver a message about valuing life and thinking about what matters the most. The stuff of ten-a-penny Christmas TV movies. There’s also a parachuted-in sub-plot involving Brexit anti-immigrant attitudes, which sits uncomfortably with the more fantastical elements of the film.

A modern Christmas classic that will become beloved in the same way as Elf or Bad Santa? Not very likely. It’s more likely to be the bargain bin DVD that sits in its shrinkwrap well after Christmas. There was a seed of a good idea here, but Feig and his screenwriters have overcooked their Christmas pudding and now expect audiences to readily consume this cringeworthy offering. Faith isn’t enough here. There should be a good story that works. The usually attentive and talented Feig will be on Santa’s naughty list this year.