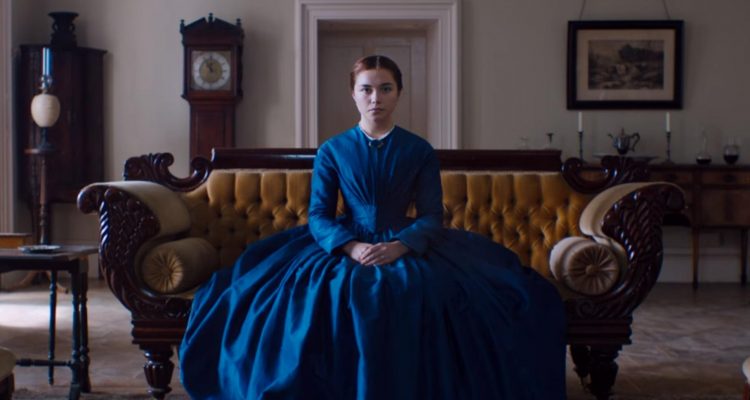 LADY MACBETH (UK/16/89mins)
Directed by William Oldroyd. Starring Florence Pugh, Christopher Fairbank, Cosmo Jarvis, Bill Fellows, Naomi Ackle
THE PLOT: Katherine (Florence Pugh) is sold into marriage with Alexander (Paul Hilton), a caustic and rough middle-aged man who is unable to consummate their marriage. When Alexander and his father are both called away from the house, Katherine at first roams the halls like a ghost in crinolines, but soon begins an affair with a farm hand, an affair that has far reaching consequences.
THE VERDICT: Based on Nikolai Leskov’s 19th century novel Lady Macbeth of the Mtsensk, and adapted for the screen and anglicised by writer Alice Birch, Lady Macbeth showcases the shocking and beautiful talents of Florence Pugh, while giving weight to the old notion that “it’s grim up North”.
Florence Pugh is front and centre in ‘Lady Macbeth’, and easily carries her first leading role, making Katherine fascinating, horrifying and complicated; no matter how much the camera gazes at her, Katherine’s motivations are almost never completely clear, and this is what makes her such a vibrant character. The rest of the cast features Christopher Fairbank, Cosmo Jarvis, Bill Fellows, and Naomi Ackle in a wonderful turn as Anna, Katherine’s maid and main antagonist.
Alice Birch’s screenplay keeps the dialogue of the film caustic and violent, and although ‘Lady Macbeth’ screams out for a moment of tenderness, these are few and far between, and often marred with violence. Katherine is a complicated character, well written as to be inscrutable through much of the film, and to make the rest of the characters seem weak and meek by comparison to her. Anna is a great balance to Katherine, and it is through her eyes that we see the moral quandries that she is placed in, and Sebastian goes from being violent to frightened in the face of the passions of his lover, Katherine.
Director William Oldroyd allows the film to unfold in front of the camera; never shying away from a silent moment, or from showing Katherine as an intruder in the home she has been forced to move to. There are gentle shifts in Katherine’s character throughout the first half of the film that Oldroyd allows to unfold on screen, but it is not until the finale that we learn the depths of Katherine’s ruthlessness, and the fact that her surroundings – or perhaps the treatment of her throughout her life – have changed the way she views life.
In all, ‘Lady Macbeth’ is a dark, grim and often challenging film to endure, but Florence Pugh makes Katherine a fascinating, terrifying character who it is hard to resist. The relentless darkness, however, sometimes becomes intrusive and challenging.
RATING: 4/5
Review by Brogen Hayes